Trump's G-7 achievements: No trade deal, no military deal, no climate deal -- and 'yes' on helping himself 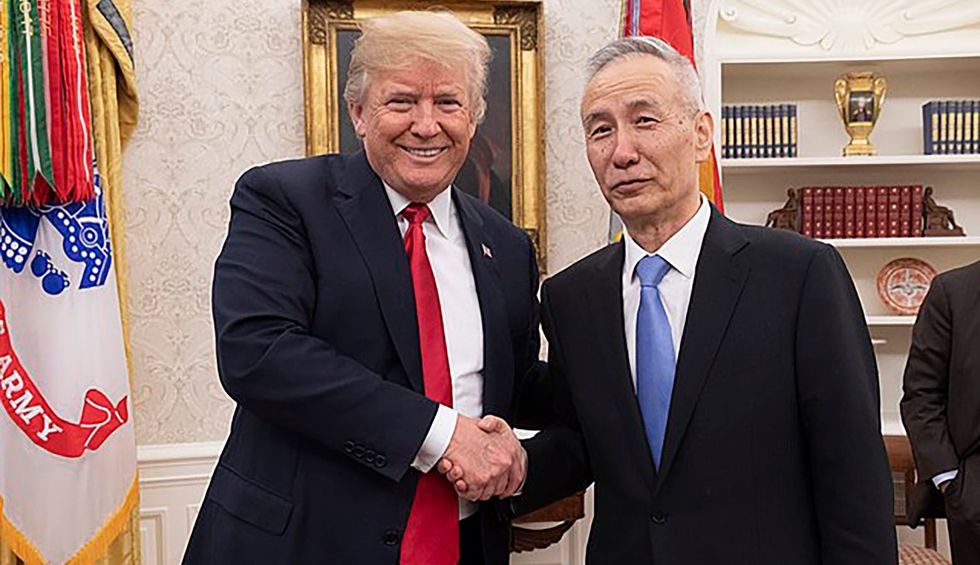 As the AP reports, Trump claimed during a Monday interview at the G-7 that his team of trade negotiators had received a pair of “very good calls” from their Chinese counterparts over the weekend. Those calls, said Trump, indicated that the two sides finally understood each other and are “dealing on proper terms.” All this means that “we’re finally going to have a deal.”

Which is nice. Except … China says it’s BS. Minutes after Trump spoke, China's Foreign Ministry spokesman joined other officials in saying that there were no calls, that they didn’t know what Trump was talking about, and that China was ready to “protect itself” and continue this trade war to it’s bitter, recessionary end.

Meanwhile, it’s not just economic deals that are baffling the great deal-maker. At the G-7 meeting, Trump also admitted that there was “no timeline” for reaching an agreement with the Taliban that would finally allow the U.S. to withdraw troops from Afghanistan after 18 years of war. This is in spite of several proposed solutions that were agreed to by the Taliban and despite the fact that Trump ran for president on claims that he would bring the troops home immediately in 2016; then in 2017 said he would bring all troops home by 2018; and earlier this month said he would have all troops home by 2020. But at the G-7, Trump said there was “no rush.” Which may be the one thing he’s said that’s true. Because he’s not rushing.

Still, if Trump is struggling to deliver a “win” on either trade or military, at least he’s trying. When it comes to the climate crisis, Trump was literally a no-show. Trump was scheduled to attend a discussion on dealing with the crisis along with other G-7 leaders, but when the time for the meeting came, Trump’s chair was empty. And it stayed that way.

It wasn’t just the climate talk that got little attention from Trump. He hung around his hotel room for two hours longer than scheduled, enjoying a bit of executive time while the rest of the world was working. He kept German Chancellor Angela Merkel waiting for two hours before showing up to a scheduled one-on-one. At that meeting, he was asked about attending the climate session and told reporters that it would be “his next stop.” Except he didn’t stop. He skipped it completely.

The subject of that meeting with Merkel appears to be the ISIS fighters that the U.S. has taken into custody and Trump’s threat to send them all to Europe if Germany and others won’t pay more for the U.S. to keep them in facilities without trial. Or international inspectors. Trump slipped in some additional threats that he might have to impose some tariffs on European cars—still not appearing to realize that Mercedes, Volkswagen, and other German carmakers have factories in the United States.

But there was one area where Trump believes he actually made a deal, and it’s so important that it makes up for all the rest. According to Trump, his financially troubled Doral resort near Miami is “perfect” for next year’s G-7 meeting. Also according to Trump, the other leaders “love the idea,” and no other location “matches what his resort ... can offer.” However, like Trump’s other real-soon-now deals, there seems to be no actual agreement that world leaders will be coming next fall to pour a multi-million-dollar windfall into a club whose revenues have fallen by 69% in the last two years.

Which only proves that the G-7 meeting was just like any other week under Trump.