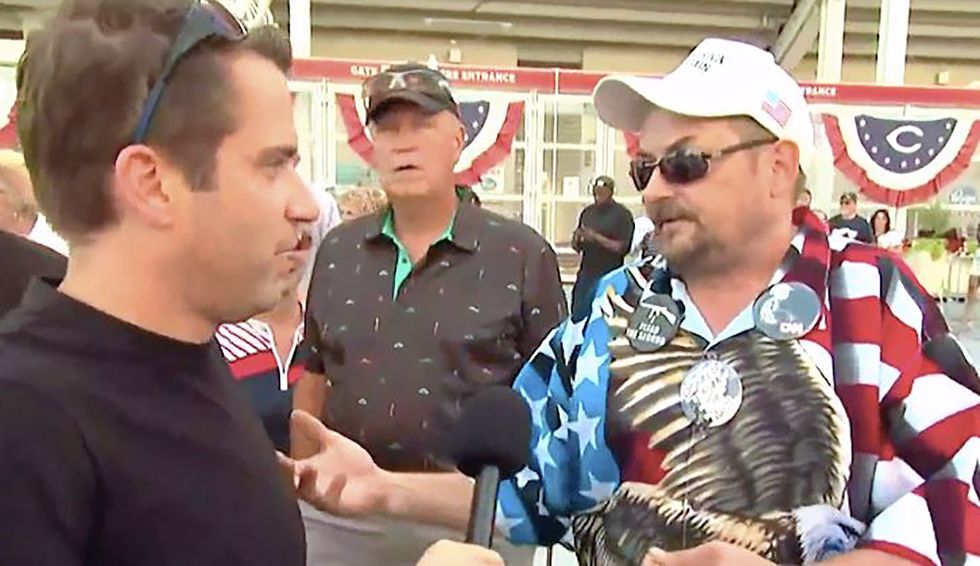 NBC News reporter Cal Perry confronted an Ohio man who allegedly hurled hateful remarks at a protester outside President Donald Trump’s rally in Ohio, but the man immediately backed down and refused to accept responsibility.

A 21-year-old woman claimed the man told her go to shoot herself as she stood outside Cincinnati’s US Bank Arena, holding a sign that read “end white supremacy.”

“I’m going to be honest,” the woman told Perry. “I’ve been pretty strong through a lot of the stuff they’ve been yelling, that one did make me choke up a little bit. It’s just a little too — I don’t know. It hits you. I’m still a person, you’re a person.”

Perry confronted the man, who said he drove four and a half hours from Sandusky in northern Ohio, but he tried to wave away the question and refused to admit he’d verbally harassed the young protester.

Perry pressed the man to explain why he’d told the young woman to shoot herself, but he refused to admit that’s what he had said.

“Did I tell her that?” said the man, who was wearing a polo-style shirt with an American flag and bald eagle printed on it, along with pro-gun buttons.

Perry said that’s what the woman told him, and the man made an exaggerated gesture meant to suggest innocence.

“Did you hear me say that?” he stammered. “You heard me say something. I told her I loved her, you want to go out for dinner?”

The man’s friend, who had a cigarette stuck in his mouth and identified himself as a military veteran, had greeted Perry with “screw you” but later insisted he wanted “everyone to have a great time and support someone who’s good.”

“I do not enforce what you believe in or what anybody else believes in,” he said.

Perry extended his hand and thanked the man for his service, and he tightly gripped the reporter’s hand and pulled him along for several feet, before a third man stepped forward and tried to pull apart their hands.

“You grab my hand again,” the veteran told the man who intervened, “I’ll kick your f*cking ass.”

Perry then caught up with the young woman, who said she felt compelled to protest the president’s rally Thursday night because she was upset by Trump’s administration, and depressed by the pride displayed by his supporters.

“Somehow they’re still very proud of the way people are being treated, and I can’t just sit and listen to that,” she said.