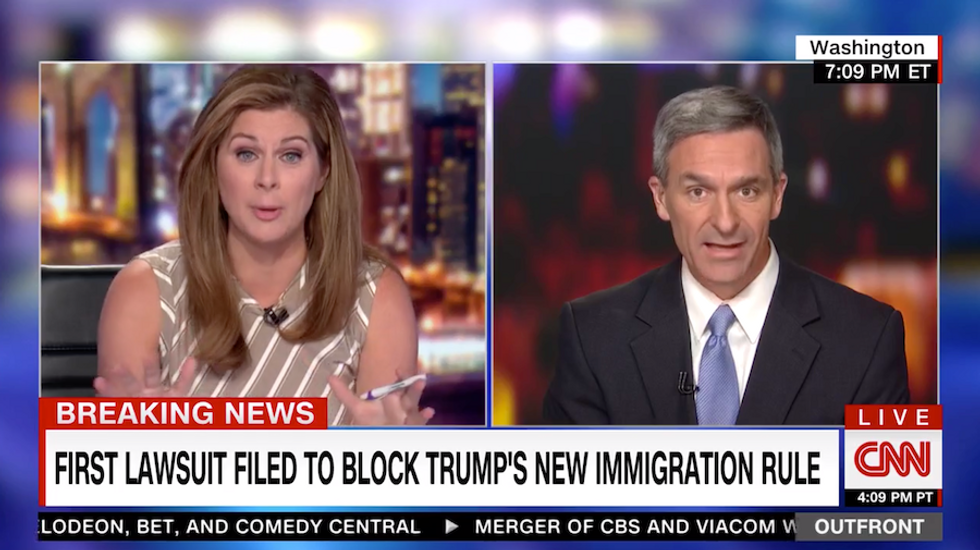 Acting Director of U.S. Citizenship and Immigration Services Ken Cuccinelli came under fire Tuesday for warping the poem on the Statue of Liberty, "The New Colossus," in an NPR interview and suggesting it should restrict its welcome to immigrants who can "stand on their own two feet and not become a public charge." He was trying, poorly, to defend a new administration policy that would limit immigrants' access to green cards if they use certain social services.

And when Cuccinelli tried to defend his callous comments on CNN Tuesday night, he may have made things even worse.

He sparred with host Erin Burnett over pointless technicalities about whether he was "quoting" the poem or who brought it up, displaying a combativeness with the press that Trump officials like to adopt when they have no other defense. But things got really troubling when he suggested that the era the poem was written in was different because immigrants were then "coming from Europe."

"That poem was referring back to people coming from Europe, where they had class-based societies, where people were considered 'wretched' if they weren't in the right class," Cuccinelli said. (The word "wretched," of course, comes from the poem by Emma Lazarus.)

It was a bizarre claim, and it's not really clear why it was relevant to the discussion at all that Burnett was trying to have.  Most immigrants to the United States these days come from Latin America and Asia. It's not obvious what point Cuccinelli was trying to make, but it certainly fed the perception — confirmed explicitly by President Donald Trump's own words — that the administration prefers European (that is, white) immigrants. It also isn't the first time that a Trump official's criticisms of the "The New Colossus" echoed bigoted language.