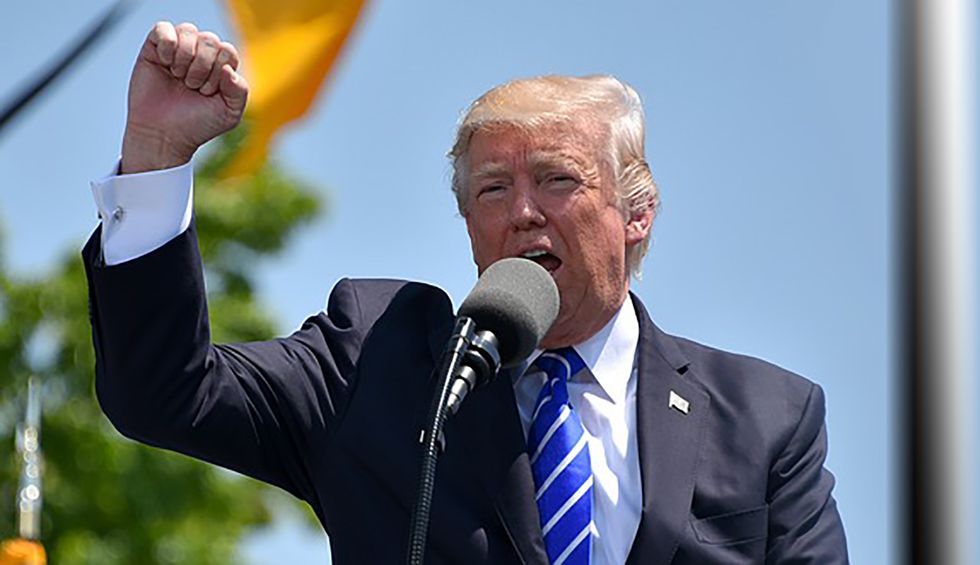 "Have you heard the one about the lawbreaker who got pardoned by President Trump?" writes The Washington Post's Dana Milbank. "It’s so funny it’s criminal."

You had me at “criminal.”

Milbank used the White House's latest claim that Trump has a sense of humor to reflect back on just how many times he and his coterie have tried to explain away his lunacy, lawlessness, and rancor as if he was just joshing. No matter how dire the situation, it turns out that Trump is always up for a laugh.

Like his latest venture in pardon-dangling in order to convince his subordinates to do anything necessary to get his precious wall built. Sure, it sounds like a mobster move, but not so. "Don't worry, I'll pardon you," was actually just the driest punchline in history. "He was joking," the White House assured us, with an eye roll. C'mon, man—what don't you get about "Take the land!" being part of his setup?

I mean, sometimes, when people are reeeeeallly cerebrally funny, it takes a little time to appreciate their brand of humor. If only we had understood that Trump was just masterfully masking his jocular takes as raging outbursts. In fact, Milbank reminds us of just how many punchlines we've missed along the way. Like when Trump asked then-FBI Director James Comey if he would just let go the whole investigation into Michael Flynn. OMG ... hilarious! Or that time he told a bunch of cops they should rough up the "thugs" they "throw into the back of a paddy wagon." Hahahahaha. Or calling Democrats "TREASONOUS" for not clapping at his State of the Union. Oh, oh, oh—and remember that time he joked about being president for life? And then he kept telling that same joke months and even years later. Man! Way to pepper in those callbacks.

And lately, Trump seems to be paying homage to the late great Robin Williams, what with all the words he says that sound more like Martian than anything resembling the English language. Genius! And here I thought he was just losing his mind.