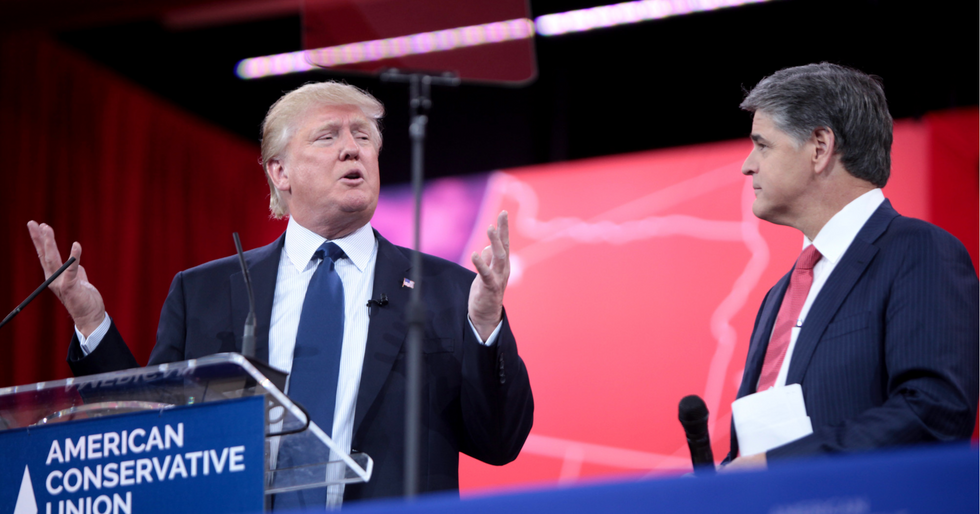 In the aftermath of the white nationalist mass murder at a Walmart in El Paso that left 22 people dead and more than two dozen others injured, Donald Trump and his allies face a conundrum. On one hand, Trump, Fox News and other conservative messengers don't want to curtail the racist rhetoric, anti-immigrant hysteria and winking at violence that inspires domestic terrorism. On the other hand, they don't want to pay a political price for their rhetoric when, inevitably, angry young men pick up guns and decide to do something to fight the supposed "invasion" of Latinos, Muslims and other groups against whom Trump encourages hatred.

Unable to actually defend spreading hateful lies that demonize people of color, Trump and his allies rely instead on a different tactic: False equivalence, trying to argue that "both sides" stoke violence and therefore they're being unfairly targeted with criticism. In this mission, Trump is getting a big assist from hate groups and neo-fascists, who have dedicated themselves to the task of creating a false narrative that "antifa" — a loose coalition of left-wing, anti-fascist activists, some of whom are willing to confront violence with violence — are a terrorist threat equivalent to that of the white nationalists who actually commit the vast majority of hate crimes.

On Saturday, a mere two weeks after the El Paso shooting, a collection of hate groups — headed by the far-right men's group known as the Proud Boys, likely joined by white nationalists and anti-government militia groups — will descend on Portland, Oregon, to help further Trump's propaganda goals.

This gathering is being called the "End Domestic Terrorism" rally but, as usual with the far right, the name is a total troll. In reality, the purpose of this rally is to create cover for people like Trump (and many other Republicans), who deliberately sow confusion about who commits domestic terrorism and what ideologies are inspiring such acts.

The process goes like this: Hate groups show up in progressive communities to hold rallies, usually with some false pretense like "free speech" or "anti-terrorism," but really for the purpose of advocating for racist, neo-fascist ideologies. The hate groups then provoke fights with counter-protesters, in hopes that the scene devolves into violent confrontation. They then use the images of the street fights as "evidence" that antifa is a violent organization. At this point, Fox News, the Trump administration and other Republicans use claims about antifa's violence to advance a "both sides" argument regarding ideological violence. This, in turn, signals to white nationalists that the Republicans have their back, thereby encouraging white nationalists to commit more genuine acts of terrorism.

It's a vicious cycle and one that is only intensifying after the attacks in El Paso. Reports from Portland police and organizers on both sides suggest that that the number of people who show up, both among the hate groups and the counter-protesters, may be much higher than in previous attempts by the alt-right to provoke street brawls in this manner.

This anticipated turnout is not despite the shooting in El Paso, but because of it. In the wake of that dreadful event, Trump and his allies — desperate to find some way to claim that "both sides" commit terrorism — started talking about "antifa" a lot, even though the number of antifa terrorist attacks remains at zero and reports show that 100% of race-based terrorism in 2018 was committed by white supremacists.

Lt. Gov. Dan Patrick, a far-right Republican, along with White House spokeswoman Kellyanne Conway and a virtual army  of right wing trolls have relentlessly worked the same talking points about antifa in an effort to deflect blame over the El Paso shooting.

Seeing so many Republican officials pick up and run with these themes can only be inspiring for hate groups, which is why there's valid reason for concern that they will turn out in large numbers this weekend.

The problem, of course, is that antifa isn't the cause of terrorism, as much as Sen. Ted Cruz, R-Texas, who tried to get antifa labeled a "terrorist organization," might claim otherwise. In order to create the illusion of antifa violence, Republicans rely on hate groups to hit the streets and start fights with antifa counter-protesters. Whatever street violence follows from that is then disingenuously labeled as "terrorism."

In order to pull off this bait-and-switch, the hate groups employ a deliberately confusing messaging strategy. To journalists and outsiders, they play-act the innocents, claiming they want to hold a peaceful protest and have no desire for violence. Among themselves, however, they work each other up for confrontation, framing the rallies not as "peaceful protests" but as deliberate attempts to get into fights.

As David Neiwert, author of "Alt-America: The Rise of the Radical Right in the Age of Trump," detailed at Daily Kos, when Proud Boys member Joe Biggs announced the upcoming rally on Periscope, he wore a T-shirt celebrating the way that former Chilean dictator Augusto Pinochet dealt with political opponents — by throwing them out of helicopters.

"You’re not gonna feel safe when you go out in public," he dramatically declared, speaking to an imaginary antifa audience.

On Twitter, he backed this pro-violence message up with, "Get a gun. Get ammo. Get your gun license. Get training. Practice as much as you can and be ready because the left isn’t playing anymore and neither should we."

The Proud Boys and other fascist groups always frame their tendencies to violence as self-defense, but that's just part of the propaganda push to paint themselves as victims, and antifa as the bad guys. As Neiwert's post makes clear, the bigger picture here is a bunch of fascists working themselves into a frenzy, with an eye towards starting fights. (Anyone familiar with the history of Germany in the 1930s will notice the parallels, of course.)

That's why the far right continues to target Portland for these rallies, as that city has a robust antifa community that's willing to confront fascists in the streets. While the vast majority of antifa protesters are nonviolent, all the fascists need is for one or two of their opponents to throw a punch, and then they can pretend that a small-scale street brawl is somehow morally equivalent to walking into a Walmart store and mowing down innocent families shopping for back-to-school clothes.

Unfortunately, there are always a handful leftists who are also keen on having punch-ups, and who too easily get roped into supplying propaganda cover for actual terrorists. As Will Sommer at the Daily Beast notes, right-wing journalist Andy Ngo took a beating earlier this summer, when the alt-right trawled for a fight in Portland and successfully got one. That event "turned Ngo into a celebrity on Fox News," which is always looking for excuses, however thin, to push the idea that "both sides" are somehow involved in terrorism — when only one side is shooting up synagogues, mosques, garlic festivals and shopping centers.

This is what the Proud Boys and other fascist groups descending on Portland are counting on. Even if 99% of the counter-protesters avoid violence, if even one person throws a punch, the fascists have achieved their goal of feeding the "both sides" narrative Trump and Fox News are pushing so hard.

It's unbelievably asinine to suggest that a few heated words, or even a street brawl, bears any similarity to a mass murder staged by a white nationalist who drove 10 hours to a particular Walmart store in a largely Latino city. But Trump and his allies are so devoid of any sense of shame or decency that they will gladly push this ridiculous notion. Far worse, many in the mainstream media — desperate to appear "balanced" — will also pretend to believe there's some kind of equivalence.

There's no direct or official conspiracy between Trump and the Republican Party and far-right hate groups, but there doesn't need to be. It's clear enough they are working together to construct and promote a narrative meant to minimize and provide cover for white nationalist violence. The result, unfortunately, is likely to be the further emboldening of fascist movements and a further expansion of white nationalist violence.