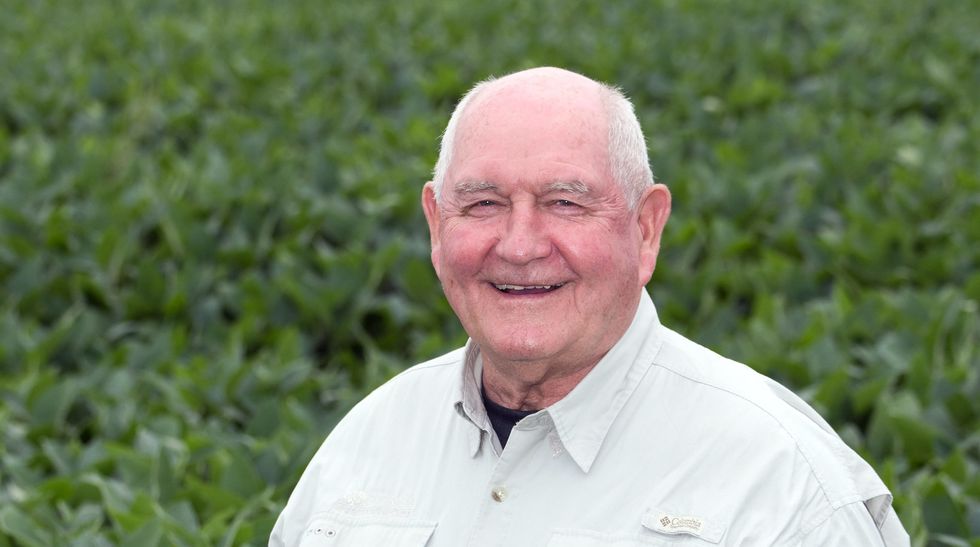 U.S. Department of Agriculture (USDA) Secretary Sonny Perdue and Mrs, Mary Perdue meet with Longley Farm co-owner Kate Danner, her husband and co-owner Jason Danner, and her father John Longley, in Aledo, IL, on Aug. 6, 2017. His stop here is part of a five-state RV tour, featuring stops in five states: Wisconsin, Minnesota, Iowa, Illinois, and Indiana; titled the “Back to Our Roots” Tour, he is gathering input on the 2018 Farm Bill and increasing rural prosperity, Aug. 3-8, 2017. Along the way, Perdue will meet with farmers, ranchers, foresters, producers, students, governors, Members of Congress, U.S. Department of Agriculture (USDA) employees, and other stakeholders. This is the first of two RV tours the secretary will undertake this summer. “The ‘Back to our Roots’ Farm Bill and rural prosperity RV listening tour will allow us to hear directly from people in agriculture across the country, as well as our consumers – they are the ones on the front lines of American agriculture and they know best what the current issues are,” Perdue said. “USDA will be intimately involved as Congress deliberates and formulates the 2018 Farm Bill. We are committed to making the resources and the research available so that Congress can make good facts-based, data-driven decisions. It’s important to look at past practices to see what has worked and what has not worked, so that we create a farm bill for the future that will be embraced by American agriculture in 2018.” For social media purposes, Secretary Perdue’s Twitter account (@SecretarySonny) will be using the hashtag #BackToOurRoots. USDA Photo by Lance Cheung.
Andrea Germanos
and
Common Dreams
August 09, 2019

Brushing off overwhelming public opposition, the Trump administration this week re-approved the use of so-called "cyanide bombs" to kill wild animals on public lands.

Known officially as M-44s, the devices "can't be used safely by anyone, anywhere," said Collette Adkins, carnivore conservation director at the Center for Biological Diversity, noting that they claim the lives of target animals like coyotes as well as non-target animals including foxes, bears, and family pets.

The announcement was posted in the Federal Register, authorizing their use on "an interim basis—until a final decision can be made in 2021," as Newsweek reported. It authorizes their use by Wildlife Services, a program of the U.S. Department of Agriculture, and by state agencies in South Dakota, Montana, Wyoming, New Mexico, and Texas, said the Center for Biological Diversity.

Wildlife Services—which has been in the crosshairs of animal welfare and conservation groups—says its mission is "to resolve wildlife conflicts to allow people and wildlife to coexist." However, critics like the Humane Society say (pdf) it "has shown a preference for lethal methods in resolving conflicts" and has been "exterminating wildlife as a government subsidy for private ranchers and other special interests, using inhumane and ineffective methods, while the U.S. taxpayers foot a large share of the bill."

The devices, known as M-44s, which are implanted in the ground and resemble lawn sprinklers, use a spring-loaded ejector to release sodium cyanide when an animal tugs on its baited capsule holder.

The government halted the use of the devices last year after one of them was responsible for injuring a boy and killing his dog in Idaho.

But the EPA has decided they are still safe for use, after support from rancher groups and "stakeholders" including farmers groups.

It said that the cyanide bombs stopped predators from killing livestock and that a ban would result in farmers losing money.

The Center for Biological Diversity, in a tweet, called M-44s "horrific death traps."

When the EPA earlier this year proposed their reinstatement, the Center for Biological Diversity and Western Environmental Law Center analyzed a batch of over 22,000 public comments.

Public sentiment was clear, said the groups, as 99.9 percent of people supported a ban on the cyanide bombs.

The conservation groups also pointed to Wildlife Services' own data showing that out of the nearly 6,600 animals it killed in 2018, over 200 were non-target animals—a death toll they say is likely an under-count.

"EPA is blatantly ignoring its fundamental duty to protect the public, our pets, and native wildlife from the cruel, lethal impacts of cyanide bombs lurking on our public lands," said Kelly Nokes, a wildlife attorney with the Western Environmental Law Center.

The EPA did add restrictions—including increasing the amount of space between a public roadway and the devices, and the distance between warning signs and the cyanide bombs—but those changes did little to assuage conservation groups' concerns.

"Tightening up use restrictions is turning a blind eye to the reality of M-44s," said Brooks Fahy, executive director of Predator Defense.

"In my 25 years working with M-44 victims I've learned that Wildlife Services' agents frequently do not follow the use restrictions. And warning signs will not prevent more dogs, wild animals, and potentially children from being killed," he continued. "They cannot read them."