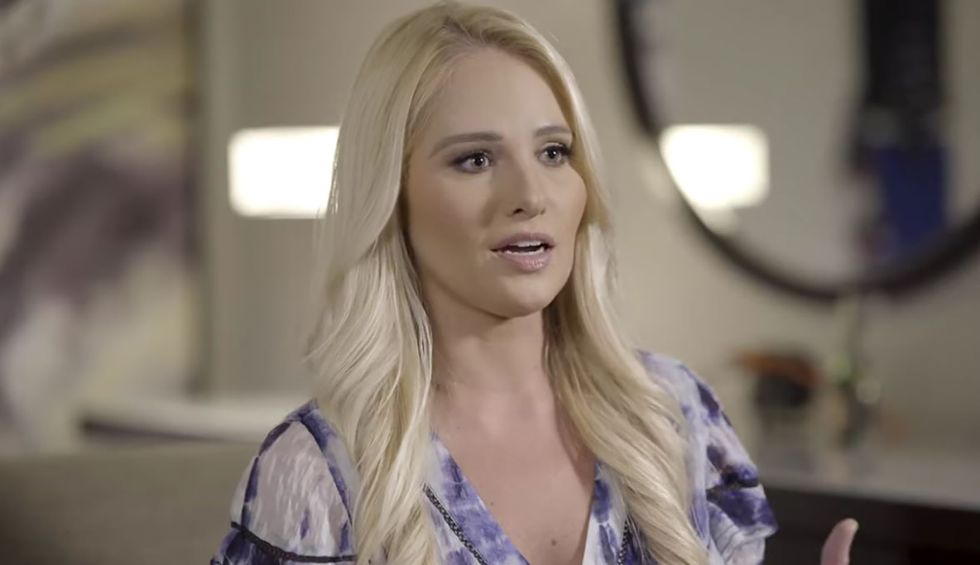 In their decades long resentment fueled quest to achieve government by spite, conservatives have not only sacrificed their souls, but also their wallets. Giving one’s money, time, and effort to horrible human beings in order to achieve disgusting policies is one things. But buying horrible crap just because it has some stars and stripes which these idiots say represent America and Jesus, or diet supplements with a label stating how “alpha” it is and promises to be “rock hard” in making their dick better than liberal cucks, while being promoted and hocked by the latest right-wing dipshit, well ... that’s a whole other sad story.

Late last week, Fox News personality Tomi Lahren announced her “Freedom” line of athletic wear, which is being marketed specifically as “a brand that represents their freedom ... a brand that represents their rights.” Lahren, who seems to be living proof hair bleach may cause brain damage, has made her bones by being Fox’s young conservative voice of millennials. However, she’s also infamous for not being the sharpest knife in the drawer, even among the dull selection of conservative nitwits which make up the pundit stable. Lahren infamously showed her lack of depth when she admitted to still being on her parents’ health insurance moments after criticizing Obamacare, which she wouldn’t have been able to do if the law didn’t exist, and received intense criticism this year when she claimed Sen. Kamala Harris had slept her way to the top.

Partnering with Alexo Athletica, a brand which makes clothing with gun holsters inside of them, the athletic line will include a bra top for $52, a sweater for $69, leggings at $89, and a bomber jacket for $99, designed around having a space for a “small self-defense tool,” which Lahren claims is “about freedom, it’s about the bill of rights, it’s about constitutional freedoms” in support of Donald Trump and the United States. However, there are two problems. Buying star-spangled polyester is a dubious argument for patriotism. And reports indicate that just like many of the bearing the name of the current president, Lahren’s clothing is being made in China.

Lahren’s is but one of many on the right-wing side of things which has embraced merchandising, and linked its sale to support of conservatism and patriotism in America. Trump himself has basically been using his position to grift supporters out of their money in selling t-shirts, straws, and other knick-knacks, and this has been true among other conservative special interests as well. The fact there are people attempting to make money off of bullshit is not new, or is it unexpected. But it is interesting to ponder the market for products whose only distinctive appeal is based on ideology, and the thought-process of the dummies who buy into all of this mess, especially in a country where the values people care about are becoming more divergent among different political ideologies.

When I went to a Trump rally back in 2016, one of the things which stood out was something which happened whil walking into the rally. Around the entrance to the event, there were a throng of vendors selling MAGA hats, Trump books, and other assorted crap which would give trash a bad name. But the juxtaposition between right-wing jagoffs screaming: “Get your ‘Bomb the shit out of ISIS’ buttons,” not far from a Girl Scout troop who had decided to use the rally to sell cookies, seemed to say it all about the combination of projected American values and unseemliness. And that combo has held true into the Trump presidency and become more and more the defining quality of the conservative movement. It comes from the same disgraceful place where the same people who want to defend the American flag from NFL players who kneel in protest then support every policy which defiles what that flag represents, even when it means concentration camps and support for white nationalist rhetoric.

The sale of conservative merchandise embraces the same “fake news” resentment of reality and what is true, and then asks the same group of people who vote against their own interests to now personally spend their money in the same way.

From Christina Zhao on Newsweek:

Lahren, 27, announced her new clothing line, "Freedom," on Instagram last week. "Some have told me I'm too 'controversial' to have an athleisure line, that conservatives should just stick to politics and Trump cheerleading," the Fox personality wrote, alongside a poster advertising the new brand. "My response? Watch me. Introducing Freedom by Tomi Lahren by @alexoathleticafull line available now." Designed to represent patriotism, the line boasts clothing in red, white and blue as well as some items decorated with stars to loosely resemble the American flag. The line was created with active wear brand Alexo Athletica, a company known for producing clothing featuring gun holsters.

Shortly after Freedom's launch, social media users quickly moved to accuse Lahren of producing her line in China. Freelance writer Robyn Pennacchia tweeted a screenshot of a conversation between someone selling a Alexo Athletica piece online and a potential buyer. When asked to list the materials used, the vendor responded: "It's 95 percent polyester and 5 percent spandex. Made in China though." … Twitter user @JordanUhl pointed out that Lahren's allegedly made in China clothing line comes just one month after the television personality called on companies to make their products in America during a Fox Nation "Final Thoughts" segment on July 17th.

"As it stands, products used for government projects can carry the 'Made in America' logo with parts made of 50 percent foreign components but not under this president," Lahren said in the segment. "Trump signed an executive order raising the percentage of American components to 75 percent. That's right baby, made in the U.S.A." … "He talks the talk and walks the walk. In America, it's Americans first. We should come first in our own dang country and in under this president, we do," the 27-year-old host added.

This sort of merchandising is very common among right-wing morons.

From Jed Oelbaum at Vice:

The marketing pitched the diet to a holy trinity of older Americans, religious people, and the heart of MAGA America, with ads that sold it as “Donald Trump’s Plan to Make America Thin Again,” advertorials on sites like Teaparty.org, and spots that warned of “leftist food corporations” that are “terrified” of consumers taking up the diet.

Other pitches clearly targeted Christians with pop-up ads and “one weird trick”–style offers touting the program as a secret technique “hidden in the bible” that “burns fat overnight.” One bit of ad copy claimed “2,000-year-old nutritional scrolls that biblical scholars recently uncovered are bringing new hope to Americans who struggle with knowing what to eat.” Also marketed with alternate brand names like “Biblical Belly Breakthrough” and “The Truth About Fats,” at one point the program was seemingly renamed, switching from primarily “The Shepherd’s Diet” to “The Shepherd’s Code.” (In Spanish, the plan goes by “La Dieta de Jesus.”)

Less than a year later, the Shepherd’s Diet, was gone, leaving a trail of misleading ads, questionable charges, and broken weight-loss dreams. Some fans of the diet say it helped them lose weight and get in shape. But other customers told VICE News that it’s a “scam” targeted at Christian consumers. Either way, its story is a glimpse into the growing online landscape of unaccountable businesses hawking shady products to Christians and conservatives in the Trump era.