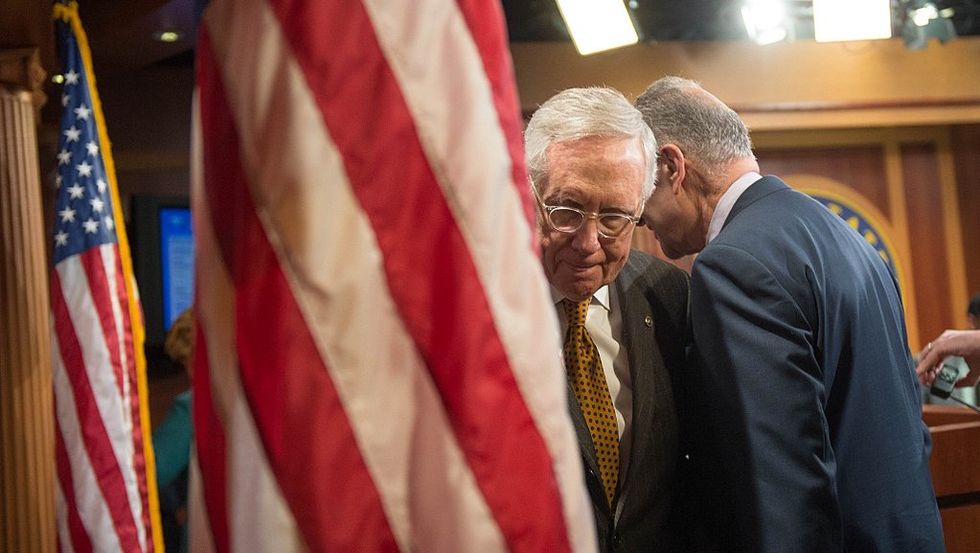 If you put Harry Reid and Mitch McConnell to an objective, head-to-head assessment of which majority leader was truly an institutionalist and who was truly valued and revered in the Senate, Harry Reid would win every time. So when Reid writes in The New York Times "The Filibuster Is Suffocating the Will of the American People," and must end, every serious person should listen.

He points out that the filibuster isn't enshrined in the constitution, and wasn't even adopted until the 20th century, in 1917. That it has become such a tool of Republican obstruction that "virtually all Senate business" and "even the most bipartisan legislation" is subject to getting 60 votes, that means that the "Senate is now a place where the most pressing issues facing our country are disregarded, along with the will of the American people overwhelmingly calling for action. The future of our country is sacrificed at the altar of the filibuster," he writes.

"That is why I am now calling on the Senate to abolish the filibuster in all its forms," he declares. "And I am calling on candidates seeking the Democratic nomination for president to do the same." If any of those candidates becomes president and "wants to tackle the most important issues facing our country, then he or she must have the ability to do so—and that means curtailing Republicans' ability to stifle the will of the American people."

Reid details the litany of issues our Congress is failing—or in the case of McConnell, refusing—to address: climate change, Trump's ripping families apart and putting little children in detention camps, "why the federal government hasn't lifted a finger to stop the growing epidemic of gun violence." It's the filibuster. It also prevented critical policy from being enacted under President Obama. "Millions of undocumented immigrants brought to this country as children would have a pathway to citizenship through the Dream Act; millions of Americans would have a government-run public option as part of health care reform; and the American Jobs Act and the “Buffet Rule” requiring the wealthy pay their fair share of taxes would be law, further strengthening the economy and helping to address the issue of income inequality."

Reid says "I didn't come to this decision lightly." He writes that of a Senate "known as 'the world's greatest deliberative body,' a place where collegiality and compromise held sway and issues could be discussed rationally and agreements could be reached. […] Sadly, we are not living in the same legislative world anymore."

No one could say this better. "This era of obstruction and inaction must come to an end, and I urge our nation’s leaders to join me in calling for the abolition of the filibuster. It's time for the Senate to start working again."