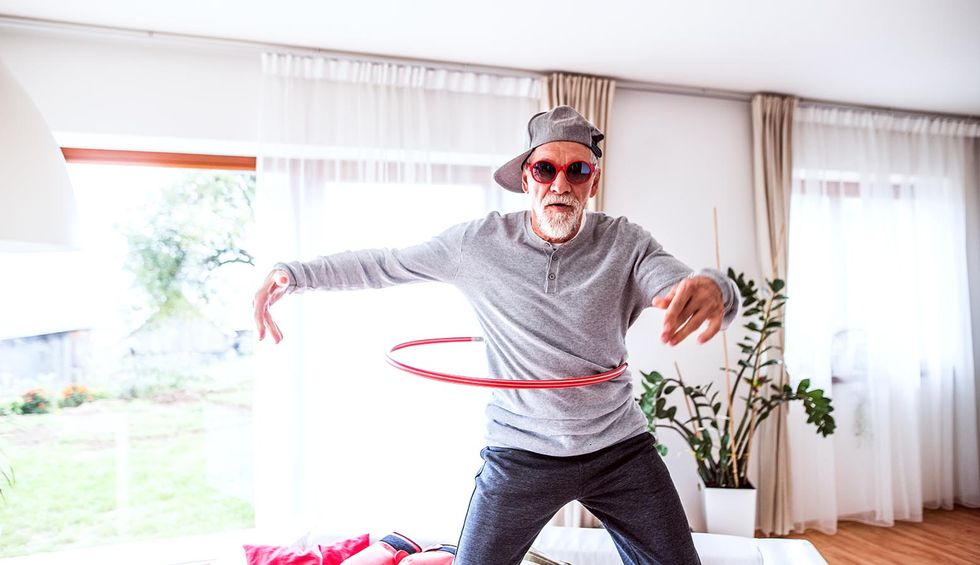 Donald Trump is the great mono-story of our time. Unless you’ve been away from the planet for a while, you know cable news is all Trump, all the time; Trumpworld is social media’s mesmerizingly dystopian subdivision. Yet the fixation with our president’s juvenile leadership style overlooks a deeper one: America’s obsession with eternal adolescence.

Hanging onto youth is an id-driven urge, right up there with sex and counting “likes” on Twitter and Instagram. But for all its pluses— inspiring seniors to trade the recliner for kettlebell training, for instance—it can lead to behavior that disses public norms, evades the bald-face truth, and swaps fevered fantasies for common sense. We get uber-brattishness not only in the Oval Office, but also across the political spectrum.

I didn’t really tumble to the mythic power of adolescence until the 1990s, when my friend Alex Gibney and I created a television history of the 1950s, and I was reminded the decade of Hula Hoops, Frisbees and Silly Putty had invented teenagers, too. Born in 1950, I remember fretting the rock ‘n’ roll boom Big Mama Thornton and Elvis helped ignite would fizzle before I hit the magic No. 13. Little did I realize I was a foot soldier in a cultural revolution.

Teenagers had always been with us, of course. It wasn’t until after World War II, however, that rising prosperity merged with booming birthrates to make the young an irresistible force. In his eponymous bestseller on which we based “The Fifties” TV series, David Halberstam explained: “In the past when American teenagers had made money, their earnings, more often than not, had gone to help support their parents or had been saved for one … long-desired purchase, like a baseball glove or a bike.” In the new affluence, however, teenagers “were becoming a separate, defined part of the culture: As they had money, they were a market, and … they were listened to and catered to.”

But boomers dug the attention—so much so we weren’t about to let adolescence go. According to author Kurt Anderson, “the commitment of Americans, beginning with the baby boom generation, to a fantasy of remaining forever young” meant that “during the 1980s and ’90s, when American adults, like no adults before them — but like all who followed — began playing video games and fantasy sports, dressing like kids, and grooming themselves and even getting surgery to look more like kids.” Anderson called it the “Kids ‘R’ Us Syndrome.”

Is it any wonder, then, we eventually got a “Kids ‘R’ Us” president? Trump’s daily tweet storms, with his “I know you are, but what am I?” tone, his dysfunctional relationship with the truth, and his ducking of personal responsibility, signal off-the-hook traits that once sank public careers, pronto. But let’s be honest: Isn’t the Donald an example, albeit extreme, of the degree to which our society has normalized such behavior?

When Trump was born in 1946, America was revving up twin revolutions in communication technology and transportation that would help fuel the drive to extended adolescence. The first big impact, dramatically shrinking time and distance, manifested in how ordinary Americans were growing hungry for flashier, sped-up lifestyles.

In an interview for “The Fifties,” McDonalds founder Dick McDonald told me that after the war, he and his brother Mac McDonald witnessed the new appetites at their San Bernardino restaurant. “[A]ttitudes were completely different …,” said Dick. “We were beginning to get many complaints [about] how slow the service was. We decided, if the customer wants fast service, we’re going to give them fast service”; Dick and Mac started rolling out orders in 20 seconds, instead of 20 minutes.

Meanwhile, new technologies accelerated everything from book publishing and telecommunications to automobile and air travel. As the world got smaller and information gushed in, sociologist C. Wright Mills argued that faster times required new mental habits to let people make sense of the larger forces influencing their lives. “What they need, and what they feel they need,” wrote Mills, “is a quality of mind that will help them to use information and to develop reason in order to achieve lucid summations of what is going on in the world and of what may be happening within themselves.”

Fat chance of that. By the late 1950s, TV had swept the nation and, for broadcast impresarios, introspection didn’t monetize. A “great media-metaphor shift” was underway, as cultural critic Neil Postman put it in his landmark 1985 book “Amusing Ourselves to Death.” Americans were briskly moving from a print-based culture to an electronic-centered one. “[U]nder the governance of the printing press …,” Postman wrote, “discourse in America was … generally coherent, serious and rational.” Tailoring messages to fit the new TV medium meant fewer words and more pictures, less reflection and more emotion, and ended up rendering our national conversation “shriveled and absurd.”

That may be overstating the case, but it’s true that more and more Americans were traveling faster and lighter. Upwardly mobile, they more easily distanced themselves from many of the stark facts of life of only a few years before—backbreaking physical labor; lack of proper health care leading to untreated illness, poor teeth, and premature death; and limited access to higher education and comfortable retirements.

Fast-forward to the early 1990s, when personal computers and the rise of the internet induced the next great media shift. Suddenly, our wildest teenage dreams were now only a click or two away, stoking on-demand fantasies of leisure-time exoticism, sex and ever-unfolding material wonders. Ensorcelled, adult-adolescents suspended disbelief to a degree that, in the past, had been the preserve of dreaming, questing teenagers.

Today, in our lucid moments, we know that social media moguls have actively encouraged some of our worst behavior. Pushing angry, hate-filled content that swamps reason, they lock in eyeballs and profits. As internet pioneer Jaron Lanier, put it: “So if they can find a group in which they can elicit those emotions … they’re going to keep on reinforcing that because they can get more engagement, action, and more money out of that group ... .” And, of course, today’s ease of access to our primitive passions allows the world’s real fake-news artists to inflame the public mind and mess with our elections.

Too often, internet-abetted outrage spills into violence; yet more often, in an adolescent society, it shows up with its passive-aggressive twin, complacency. The upshot is we have a hard time knowing our own minds or maintaining our focus on serious matters. “It’s very easy to ignore the world when the internet is fun and, at the margin, it’s cheap,” said economist Tyler Cowen. “You can protest politically on your Facebook page or write a tweet and just put it aside, get to the next thing” without breaking a sweat.

Cowan argues that our complacency derives from a long-term decline in “American dynamism.” “We now have a society where we’re afraid to let our children play outside,” he said. “We medicate ourselves at much higher rates. We hold jobs for longer periods of time. We move across state lines at much lower rates than before …. But once you’re on a track to make everything safer, it’s very hard to stop or restrain yourself along appropriate margins.”

What is surely is true is that, try as we might to minimize risk, the door can never be shut tight. Instead, the failure to act on underlying problems typically opens the window to compounded trouble.

Which may explain what’s eating at our teenagers. Not only are kids taking longer to mature today, they’re coping with a hollowness at the heart of their digital lives that concerns psychologist Jean Twenge. “Parenting styles continue to change, as do school curricula and culture, and these things matter,” she wrote in The Atlantic. “But the twin rise of the smartphone and social media has caused an earthquake of a magnitude we’ve not seen in a very long time, if ever.” Pointing to a spike in teen suicide rates, Twenge said, “There is compelling evidence that the devices we’ve placed in young people’s hands are having profound effects on their lives—and making them seriously unhappy.”

You have to think that even C. Wright Mills would be shocked at the speed with which information technology has separated us from reality and amped up self-inflation. Who among us hasn’t posted Facebook items that elevate our achievements, and tout fancy friends or vacations? In such a world, maxims that once guided life, like “To thine own self be true,” can sound unbelievably trite. Meanwhile, our digital imps, like teen hoods haunting a fifties’ street corner, whisper that only suckers resist the urge to self-inflate.

It isn’t exactly Holmesian to deduce that trouble with setting sensible limits on our actions and aspirations has made it harder to talk sensibly with one another. President Trump’s spokespersons have talked unabashedly about “alternative facts” or insist that “truth isn’t truth”—prime examples of what Neil Postman called “dangerous nonsense.” Meanwhile, bloviators, left and right, insist on minor points of political dogma, and go haywire at any whiff of apostasy.

Such juvenile behavior is hard on a democracy. As Tom Nichols wrote in his 2017 book “The Death of Expertise,” when the concept “is understood as an unending demand for unearned respect for unfounded opinions, anything and everything becomes possible, including the end of democracy and republican government itself.”

To be sure, reasonable folks can understand how tempting it is for fellow citizens suffering the hard knocks of low pay or no pay, and reverse social mobility, to entertain a lazy slogan like “Make America Great Again.” But yearning for halcyon days when the economy was headed for the stars, sock hops were the groove, and a white, male-dominated supermajority told everybody, at home and abroad, how things were going to go down is, at best, a pipedream.

In our TV series, David Halberstam, that clear-eyed observer of American life, cautioned that hindsight is invariably 20-20. “There’s a tendency to romanticize the fifties and to forget the narrowness, the prejudice …” he said. “But I think there’s a generally far greater freedom and a sense of possibility, economic and other, today than in the past.”

That’s still true enough. Had David lived to see the changes churned up by our present decade (he died in 2007), however, I’m willing to bet he’d remind us that the greatest of cultures can develop bad habits of mind, lose their edge to adolescent whimsy or outright chicanery—and nations in that fix get the leadership they deserve.

Tracy Dahlby teaches journalism at the University of Texas at Austin. His latest book is “Into the Field: A Foreign Correspondent’s Notebook.”