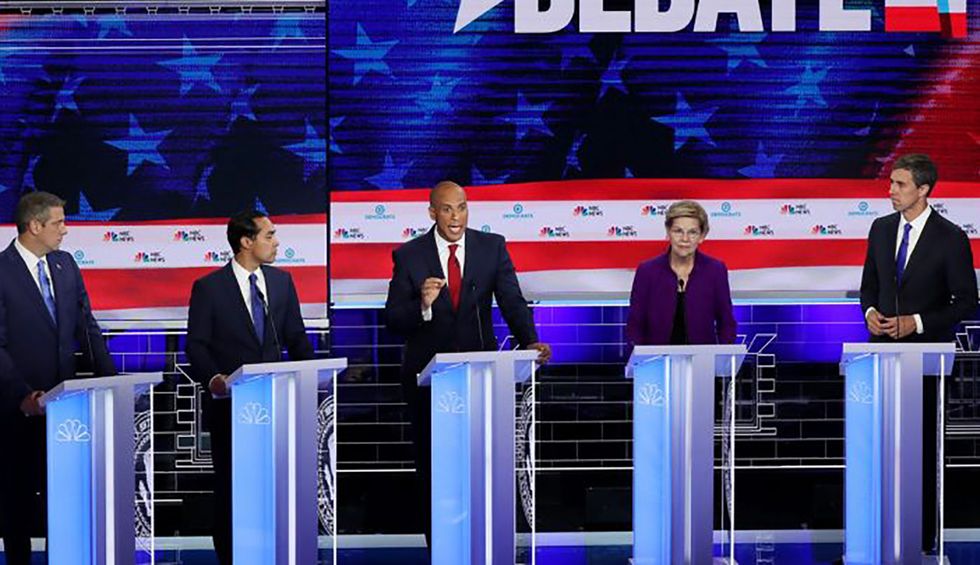 The Democratic debates turned into exactly what they should have — a war between the progressives and the neoliberal centrists (aka corporatists).

Guess which side the corporate media, the pundits, the think tanks, foundations, the DNC, and the rest of the Democratic establishment is lining up behind?

You got it. The corporatists. Not surprising when you consider most of the mainstream media is owned by corporations, and corporations fund the rest of the neoliberal institutions supporting the party.

These are the same folks who, back 2016, assured us Hillary would win and that Trump couldn’t.  Undaunted by their complete failure to predict Trump’s victory and undaunted by the fact that they have no satisfactory explanation for why they were so wrong, they’re busy dispensing advice and issuing dire warnings against progressivism once again.

The problem is, their advice is likely to result in the same outcome as it did in 2016—a Trump victory.

For example, they label as “unrealistic,” “impractical,”  “unpopular,” “fantasies,” and “wish list platforms” ideas like Medicare for All, the Green New Deal, a rational immigration policy, a fair and equitable tax structure, a trade policy that favors workers not corporations, a sane gun control policy, and cutting the so-called "Defense" budget—a budget that’s based on not defending us from the corporate welfare system that Pentagon contractors live on.

Here’s the thing.  Every one of those proposals are popular with the majority of the people.  Every one.  And that’s true even though they are being attacked by both Republicans and centrist Democrats.  Imagine how popular they would be if there were a coherent, party-wide campaign being conducted in support of them?

Take Medicare for All (M4A). Right now, centrist Democrats and the mainstream media are essentially repeating Republican talking points.  But imagine if the entire party fully embraced Medicare for All and countered Republican talking points about taking away your insurance program and raising middle class taxes with a simple, coherent message like this:

Nobody loves their insurance program, they love their doctors, nurses and hospitals.  Medicare for All offers you a choice to pay a smaller premium to the government for better care, guaranteed coverage and access to more doctors and hospitals, rather than paying a higher premium to private insurance companies for uncertain coverage, fewer choices, higher copays and inferior care.

Most people understand at some level that a system built around profits and wealth won’t be very good at delivering low-cost, high-quality health.  That’s why a majority of folks back M4A.  A party-wide message like the one above would go a long way toward convincing those who don’t already get it, and would help carry the Democrats to victory in 2020, just as health care did in 2018.

So why aren’t the Democrats embracing a popular program—one they could easily make even more popular with a little effort—that addresses the voter’s number one concern? One reason: The pharmaceutical lobby and the health insurance lobby are both major contributors to leading Democrats. “Practical” and “realistic” may have more to do with how neoliberals raise their money than it does with how viable M4A is.

Or consider the Green New Deal (GND).  In the face of a climate crisis that is literally an existential threat, the GND calls for laying out a blueprint designed to tackle climate change in a way that makes it an economic opportunity, not an economic burden.  Yes, it calls for some fundamental restructuring of our economy, but that’s exactly what’s needed to avoid an ecological Armageddon.  And that’s not hyperbole—that’s the scientifically accurate description of the path the “realists” want us to stay on.  To the extent the realists have a climate policy, it amounts to trying to jump the Grand Canyon in ten-foot increments.  Yeah, that’s “practical.”

So why are centrist Democrats ridiculing the GND?  Again, the answer is simple—they are reluctant to take on the fossil fuel industry.  In fact, the DNC overturned a party policy not to take campaign contributions from fossil fuel companies.  Turns out, it’s more “practical” to keep the corporate spigots open that it is to protect our life support systems.

Or consider trade.  While the corporate centrists would like to continue with the business-first strategy that has allowed corporations to export jobs and capital in order to avoid taxes, pay lower wages, avoid environmental laws, and do an end run around worker safety, food safety and product safety laws, progressives are advocating trade agreements that force corporations to consider those things. This would mean fewer jobs going overseas, higher tax revenues, and better lives for both domestic and international workers.

Talk about a winning issue in the battleground states.  A labor friendly trade policy—one that didn’t have to be negotiated in secret—would help Democrats carry Pennsylvania, Ohio, Michigan and Wisconsin. And it’s a great alternative to Trump’s damaging tariff war. But the MSM and the neoliberal establishment has been coming out in force against it.  Apparently, it’s not “practical” to help workers here at home, and win key states in the next election, if it means opposing the interests of big multi-national corporations.  The same seems true of a tax policy that benefits the middle class, by the way.

On another of the issues voters care about, immigration, the MSM and the centrist politicians and pundits have been giving great weight to gotcha questions like “will you criminalize folks who come in illegally?” or “will you give free medical care to illegal immigrants?” effectively making neoliberal Democrats allies to Trump’s hate, fear, and blame campaign.  We’re seeing the fruits of that now in the gut-wrenching rise of mass shootings and hate crimes.

The corporate media and other mainstream outlets have to do better.  They must begin to recognize the relationship between Trump’s vile rhetoric, and the increase in domestic terrorism, on the one hand, and acknowledge that he has no solution to the problem, other than mass incarceration in for-profit prisons and for-profit holding tanks (aka concentration camps).

In contrast, progressives have advocated a two-pronged strategy to deal with the influx.  First, they propose to increase our capacity to handle the legitimate requests for asylum coming from the sharp rise in immigrants from poverty-stricken and unsafe nations, and second, they advocate putting together a coherent plan to help Guatemala, Honduras and El Salvador cope with the crime, corruption, and climate catastrophes that are the root cause of their instability.  In contrast, Trump has cut aid to these countries, effectively increasing the number of immigrants, and he’s counting on for-profit prisons and concentration camps on the border to deal with the problem.

How can the elite pundits, centrist Democrats, and their neoliberal cheerleaders focus on Republican talking points about health care and criminalizing immigrants, when the demagogue-in-chief and his henchmen are contributing to domestic terrorism and pursuing policies that exacerbate the root cause of the immigration crisis? One hopes it has nothing to do with for-profit concentration camps.

But the larger tragedy unfolding before us, is that the confederacy of dunces who allowed Trump to win in 2016 still controls the media and the party and they are—once again—pursuing the same corporate-friendly policies and the same anti-progressive crusade that gave the nomination to a centrist neoliberal who was destined to lose, and there’s no reason to expect a different outcome if they’re successful again.