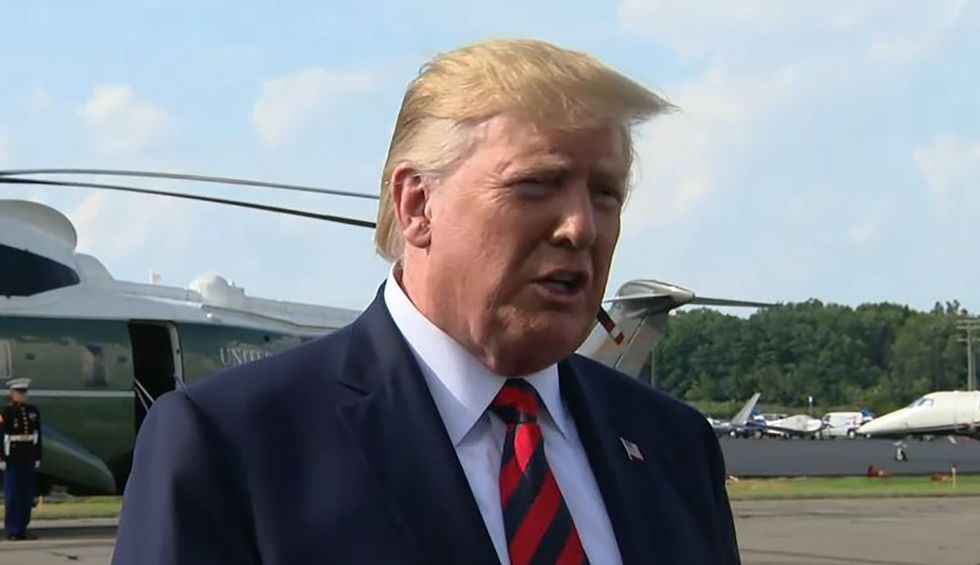 The New York Times (8/10/19) ran an article this month with a headline saying that the 2020 Democratic presidential contenders faced a major problem: “How to Be Tougher on Trade Than Trump.” Serious readers might have struggled with the idea of getting “tough on trade.” After all, trade is a tool, like a shovel.  How is it possible to get tough on a shovel?

While this headline may be especially egregious, it is characteristic of trade coverage that takes an almost entirely Trumpian view of the topic. Trump portrays the issue as one of some countries, most obviously China, benefiting at the expense of the United States. The media take a somewhat different tack on this country versus country story, but they nonetheless embrace the nonsense Trumpian logic.

For Trump, at least in his rhetoric, the trade deficit is the central measure of winners and losers. In the case of China, its huge trade surplus with the United States ($420 billion, or 2.1 percent of GDP in 2018) makes it Trumpian enemy No. 1. The trade deficit certainly is a problem for US workers, but this doesn’t mean that China is winning at the expense of the United States because of “stupid” trade negotiators, as Trump puts it.

The US trade deficit with China was not an accident. Both Republican and Democratic administrations signed trade deals that made it as easy as possible to manufacture goods in China and other countries, and then export them back to the United States.

In many cases, this meant that large US corporations, like General Electric and Boeing, outsourced parts of their operations to China to take advantage of low-cost labor there. In other cases, retailers like Walmart set up low-cost supply chains so that they could undercut their competitors in the US market.

General Electric, Boeing, Walmart and the rest did not lose from our trade deficit with China. In fact, the trade deficit was the result of their efforts to increase their profits. They have little reason to be unhappy with the trade deals negotiated over the last three decades.

It is a different story for workers in the United States. As a result of the exploding trade deficit, we lost 3.4 million manufacturing jobs between 2000 and 2007, 20 percent of the jobs in the sector. This is before the collapse of the housing bubble led to the Great Recession. We lost 40 percent of all unionized jobs in manufacturing.

It is also important to point out—contrary to what you generally read in the paper—the loss of manufacturing jobs in this seven-year period was not part of a longer downward trend. There had been only a modest decline in manufacturing employment over the prior three decades. The claim that we suddenly saw massive job loss in this sector due to automation, which just happened to coincide with the explosion of the trade deficit, is what economists refer to as “nonsense.”

This job loss not only reduced the pay of manufacturing workers, but as these displaced workers flooded into other sectors, it put downward pressure on the pay of less-educated workers more generally. This is a pretty awful story, but it is not a story of China tricking our stupid negotiators; it is a story of smart negotiators who served the people they worked for well.

For some reason, the media always accept the Trumpian narrative that the large trade deficits the US runs with China and most of the rest of the world were the result of other countries outsmarting our negotiators, or at least an accidental result of past trade deals. They never say that large trade deficits were a predictable outcome of a trade policy designed to serve the wealthy.

There is a lot at stake in the myth that ordinary workers were hurt as just an accidental byproduct of globalization. The story is that it just happens to be the case that hundreds of millions of people in the developing world are willing to do the same work as our manufacturing workers for a lot less money.

Yeah, that’s a sad story, but there are also millions of smart ambitious people who are willing to do the same work as our doctors, dentists, lawyers and other professions for a lot less money than our professionals make. But our professionals, who are winners in the global economy, along with the big corporations, got their good fortune because they rigged the process, not because of anything inherent in the nature of globalization. (Yes, this is a major point in my [free] book Rigged: How the Rules of Globalization and the Modern Economy Were Structured to Make the Rich Richer.)

The fact that trade is a story of winners and losers within countries rather than between countries is especially important now that our trade conflicts are entering a new phase, especially with China. While not generally endorsing Trump’s reality TV show tactics, most reporting has taken the position that “we” have genuine grounds for complaint with China.

The complaints don’t center on the undervaluation of China’s currency, which is a problem for manufacturing workers. Rather, the issue that takes center stage is the supposed theft by China of “our” intellectual property.

Although this sort of claim is routinely asserted, in fact the overwhelming majority of people in the United States have never had any intellectual property stolen by China. In reality, the complaint is that companies like Boeing, GE, Pfizer and Merck are upset about China not respecting their patent and copyright claims, and they want the rest of us to have a trade war to defend them.

While these companies would be hugely outnumbered if it were a question of putting goals in trade policy to a vote, they can count on strong support in the media on both the opinion pages and, more importantly, the news pages. The issue is entirely framed in their favor, and dissenting voices are as likely to be heard as in the People’s Republic of China.

Trade reporters will never even apply the same logic to the alleged theft of intellectual property that they always apply to the United States getting lower-cost imports from China. In the latter case, reporters and economists routinely give us the happy news that cheaper imports increase the purchasing power of people in the United States. This is supposed to be especially good for those at the bottom, who are now able to buy lower-cost clothes, shoes and other items at Walmart.

Imagine we had some reporters and economists who valued consistency. China’s “theft” of the intellectual property of US corporations will mean that we have new products using artificial intelligence and other cutting-edge technologies available to us at lower prices. The same will be true with prescription drugs, software and other sectors where the trade warriors claim that China is not fairly compensating our corporations.

This would hurt the US corporations that allegedly are having their intellectual property stolen. It would also likely mean fewer jobs and lower pay for the highly educated workers employed by these companies to produce intellectual property. But just as manufacturing workers were expected to make sacrifices for the greater good in the last decade, there is no reason that we shouldn’t expect sacrifices from this more privileged group of workers in the next decade.

Incredibly, the simple logic of the gains from trade story is altogether absent from news reporting and opinion pieces on the topic. Rather, we get a jingoistic rally-round-the-flag sort of discussion that would make Donald Trump proud.

It would be great if trade reporters could get a bit more serious and give some thought to winners and losers from trade policy, and not pretend that everyone in the United States is in the same boat. But that is probably asking too much from the media. Instead, we are likely to get more pieces pushing Democrats to get tough on shovels.