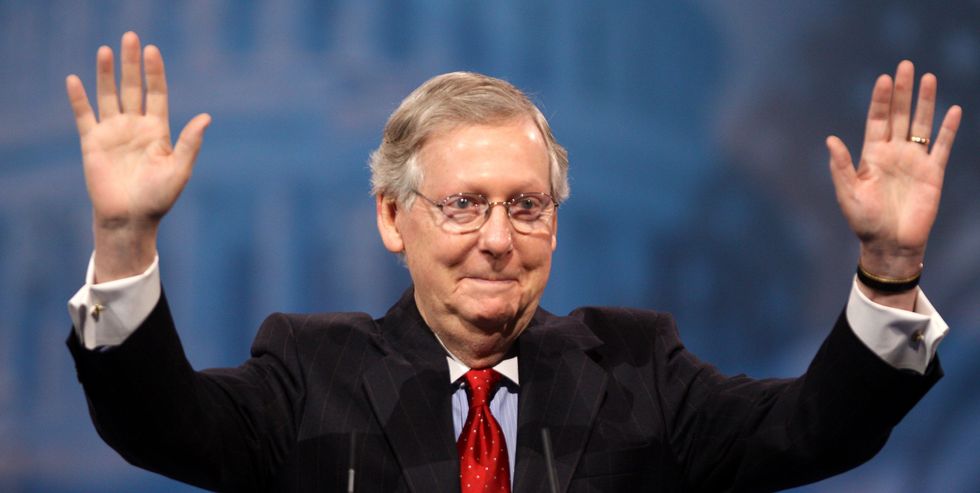 The office of Senate Majority Leader Mitch McConnell is reporting that the 77-year-old Republican is at home recovering from an accident that left him with a fractured shoulder.

David Popp, McConnell’s communications director, said in an official statement, “This morning, Leader McConnell tripped at home on his outside patio and suffered a fractured shoulder. He has been treated, released and is working from his home in Louisville.”

Popp went on to say that McConnell had contacted two fellow senators following mass shootings in their states over the weekend: Sen. John Cornyn of Texas and Sen. Rob Portman of Ohio, both fellow Republicans. McConnell, according to Popp, expressed to Cornyn and Portman to “his deepest sympathies” and wanted to “discuss the senseless tragedies.”

Some Twitter users have been quick to respond that McConnell is lucky to have first-rate health insurance funded by taxpayers — the same taxpayers he would like to deprive of health insurance by ending the Affordable Care Act of 2010, a.k.a. Obamacare.

Twitter user @jivekata posted, “Good thing he has good healthcare that we pay for.” And similarly, @wagner_rob posted, “Good thing he has insurance” — an obvious reference to the millions of Americans who don’t have health insurance.Twitter user Dorothy Higgins, @itsybitsydotsie, sarcastically posted, “Since the fall was due to a pre-existing condition called old age, his insurance will not cover treatment costs.” Equally sarcastic was @NYCanegirl, who posted, “Need to see the x-ray, please.”

@jgjg123321 wondered how the “death panels” — that is, insurance companies known for denying treatment — are “gonna score this one.” And @Darren_in_Vegas tweeted, “Sounds like a pre existing-condition to me.”