Roy Moore: 'Do you know what transgender is? That’s not biblical' 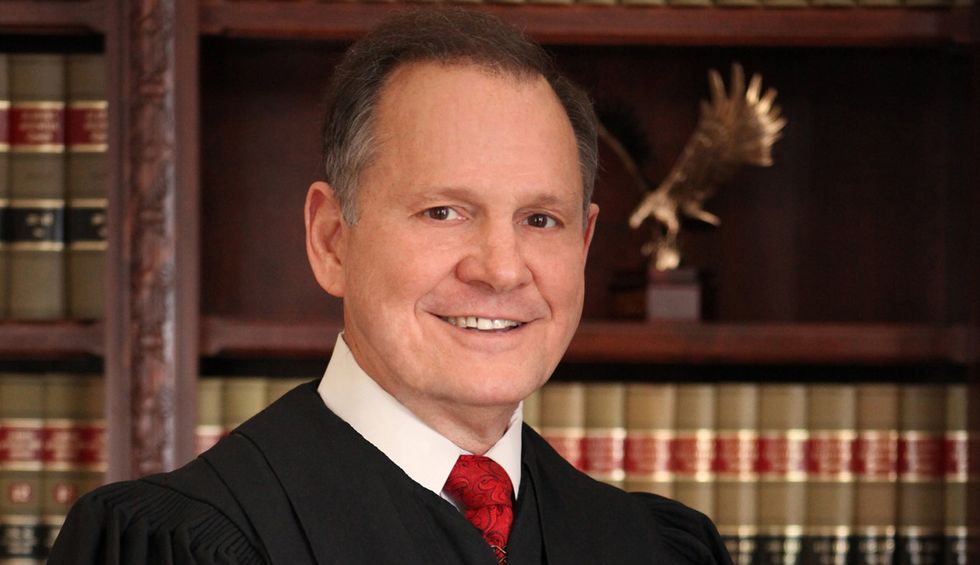 Roy Moore, the disgraced Alabama Senate candidate who is seeking to win the Republican nomination again in 2020, attempted to justify the ban on transgender military service by invoking both the Bible and an old episode of the hit sitcom “M*A*S*H.”

The comment from Moore, who was twice removed from his seat on Alabama’s Supreme Court, was prompted by a question about civil unions during a Dekalb County Republican Breakfast Club meeting Saturday in the Alabama community of Fort Payne, according to Yellowhammer. A long-term opponent of same-sex marriage, Moore said he would oppose civil unions as a substitute, because he believes the government should not recognize any act involving “sodomy.”

"Civil unions — I would have been against civil unions. I think people want to live together — fine, if two people want to live together and do what they want to do in private,” Moore reportedly told the audience. “I don’t think we should recognize it if it deals with sodomy. Sodomy used to be against our laws. I can’t support sodomy. I can’t support it. If a Christian supports sodomy, I wonder what the reason would be.”

Invoking “M*A*S*H,” Moore then proceeded on a diatribe about the ban on transgender military service.

"You know, the LGBTQ-VRSTUV. I don’t know what it is — LGBTQ? When they first came out, I said, ‘Transgender? Never. That’s dumb.' We’d never have that. Do you know what transgender is? That’s not biblical. If that’s biblical, God created man and woman. And when men want to be women? I was watching ‘M*A*S*H’ the other day — talking about Korea, Vietnam. I was watching ‘M*A*S*H,’ talking about what’s his name — Klinger? He wanted to get out of the Army, because they didn’t accept transgender. Now, I guess he would get a promotion," Moore continued.

Moore further claimed that his opposition to LGBTQ rights resulted in his being “smeared," most likely a reference to the scandals that led to his defeat in the 2017 special election for the Senate seat vacated by former Attorney General Jeff Sessions in Alabama.

"LGBT have an agenda. They won’t even put my name on a billboard now on church, because they would get attacked. Who speaks against LGBT?” he continued. “Tell me the last politician you heard to talk about transgender rights. Even the Supreme Court hasn’t recognized transgender rights."

Moore, whose 2017 Senate campaign was derailed by multiple accusations of sexual misconduct, has been urged not to run for the Senate again after becoming the first Republican nominated for a seat in the upper chamber to lose an election in Alabama in more than two decades when he was defeated by incumbent Sen. Doug Jones.

In May, President Donald Trump tweeted that "Republicans cannot allow themselves to again lose the Senate seat in the Great State of Alabama. This time it will be for Six Years, not just Two. I have NOTHING against Roy Moore, and unlike many other Republican leaders, wanted him to win. But he didn’t, and probably won’t....."

He added, "...If Alabama does not elect a Republican to the Senate in 2020, many of the incredible gains that we have made during my Presidency may be lost, including our Pro-Life victories. Roy Moore cannot win, and the consequences will be devastating....Judges and Supreme Court Justices!"