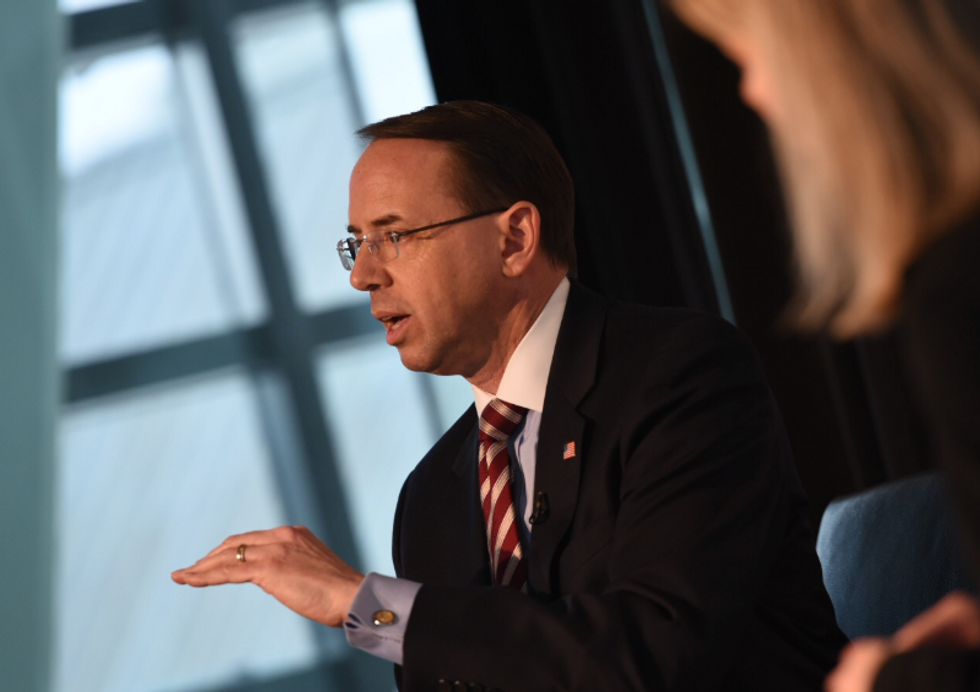 Since leaving the Justice Department tarnished by his complicity in Attorney General Bill Barr's deceptions, former Deputy Attorney General Rod Rosenstein has taken to the habit of journalists, people who have too much time on their hands, and presidents of the United States: being snide on Twitter.

And in a new, condescending broadside aimed at CNN legal analyst Asha Rangappa, Rosenstein showed that he's still willing to perform a key job from his old position, pro bono: covering up for Barr.

Rangappa had mockingly addressed a video of Rosenstein in which he gave advice on discerning fact from fiction: "Check multiple sources. If you get the news from TV, change the channel. 'The most important thing is to read broadly, because when you read broadly, you develop a sense of what is and isn’t right.'" In reply, Rangappa referred to the fact that Rosenstein had stood by and watched while Barr misled the world about Special Counsel Robert Mueller's report (so much so, in fact, that Mueller himself wrote Barr a letter complaining about this fact.)

For instance, if the Attorney General gets on TV and claims that the reason the President wasn’t indicted had nothi… https://t.co/tArL3MGe4z
— Asha Rangappa (@Asha Rangappa) 1567191933.0

This pundit has the right approach - read and decide for yourself - although she does not quote a source. (Nobody i… https://t.co/oZgOSZPNth
— Rod Rosenstein (@Rod Rosenstein) 1567196425.0

Legal analyst Renato Mariotti, who is friends with Rangappa, noted that Rosenstein had completely missed the point of her remarks.

"This is misleading and misses Asha's point," he said. "Mueller didn't even consider an indictment of Trump because OLC policy precluded an indictment. Barr misled the public by suggesting Mueller instead wrestled with 'difficult questions.' You stood with Barr while he did so."

Now, on the one hand, this is just a petty exchange that shows a former deputy attorney general really should find better things to do with his time.

But it's also revealing. It shows Rosenstein is defensive about his actions at the end of the Mueller investigation — and he has good reason to be ashamed of them — and he is still engaging in Barr's cover-up.

Because while Rosenstein is correct that Mueller never recommended prosecution of the president, Barr misled the public by suggesting the special counsel simply gave up on making a prosecutorial decision. Instead, Mueller concluded that he had an obligation not to conclude that Trump committed a crime, because Justice Department policy prevents the indictment of sitting presidents. This confusion, which was clearly intentionally fed by Barr and in which Rosenstein was complicit, still remains in the American public misleads voters about the nature of the president's conduct.

Rosenstein's tweet is also a reminder that, despite his claim that the release of the Mueller report means "everybody can critique the decision [Barr] is accountable for making," this is completely false. In fact, Barr is not accountable for his actions at all. He reports directly to the president — the person for whom he conducted a cover-up. Barr could theoretically be impeached by Congress, but the practical barriers to such an outcome are immense. And indeed, the success of the attorney general's cover-up makes congressional accountability essentially impossible.

Moreover, Barr and Rosenstein's joint conclusion that Trump's actions as described in the Mueller report don't constitute any crimes has actually never been explained. Barr simply announced their final conclusion but provided no analysis or argument that this conclusion is correct. This is especially galling since more than 1,000 former prosecutors say Trump has broken the law by criminally obstructing justice.

Without any analysis, it's fair to say that Barr and Rosenstein's position is not just wrong, but indefensible and undefended.

That Rosenstein pretends otherwise just shows that he's much more cowardly and deceptive than he led many to believe while in office. Congress should call him to testify publicly and explain himself; it would be much more enlightening than his tweets.