Rep. Steve King keeps defending white supremacy. This Democrat is ready to oust him in 2020 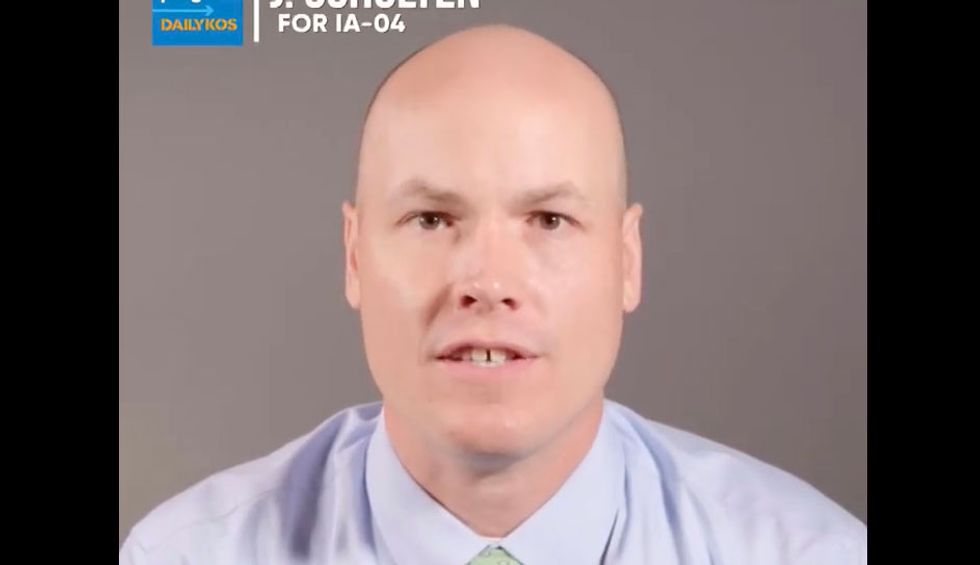 J. D. Scholten is running for Rep. Steve King’s seat in Iowa’s 4th Congressional District. If Scholten’s name sounds familiar, it’s probably because you remember that he ran against King before: In last year’s midterm elections, Scholten nearly defeated King, losing by just a 3% margin. King, whose xenophobia, hate, and racism are unquestionably dangerous, is a Republican that voters around the country are hoping to see ousted in 2020.

And as Scholten told Daily Kos at this year’s Netroots Nation, he’s learned a lot from his first run against the GOP congressman who promotes white nationalism and neo-Nazis on Twitter.

What did Scholten hear a lot back in 2018? “Oh, God bless you,” Scholten remembers being told at town halls in northwest Iowa, “someone should run against Steve King.” Before long, people got to know the paralegal and former semiprofessional baseball player for his own progressive values, and the dialogue shifted. People started openly identifying themselves as Democrats and putting signs for Scholten in their yards, he recalled in his Making Progress interview with Daily Kos.

“We did a great job of getting people uncomfortable,” he said with a smile.

Scholten reflects on how he approached his last run, what he now knows for his second, and what advice he’d give his teenage self, all in the exclusive video below.

Question 1: You were a long shot in 2018 and yet you nearly won a district that Trump won by 27 points. How did you get so close to winning a traditionally conservative district?

And when we went the first time, you got the, "Oh, God bless you, somebody should run against Steve King", the second time you got, "Oh, he's just not Steve King, he's standing for something," and that third time is when you really saw hope, and that, where we talked to Democrats who were a little shy to call themselves Democrats at the end were putting yard signs and just, we created a grassroots movement and it's something that I'm proud of and the fact that I pretty much lived out of an RV for three months.

The biggest lesson I learned was just kinda how campaigns are run. I mean, I came from way out in left field, I played baseball in my 20s, I'm a paralegal, I'm not a conventional candidate by any means. And so what we learned and the lessons along the way, just how to do things not necessarily harder but far more efficient, and just to see where we could start off now compared to where we were two years ago when we didn't have a dime, we didn't have name recognition, and most people in the district didn't know me, and so it's light years from that and we ran the best field program this district's ever seen last time and at best I would say we were probably a C- and we have a chance to, if we do an A field program, to win the race.

Question 3: Iowa’s farmers rely so much on immigrant labor. Do you know how the president’s proposed ICE raids and immigration policies have been affecting both these vital workers and the farmers who depend on them?

There's no doubt that our nation needs immigration reform, and it's definitely in Iowa's 4th District. The reason why we have sanctuary cities, the reason why we haven't had immigration reform in the last 17 years is because of people like Congressman Steve King, and we need a workforce in the 4th District. I remember when I launched the campaign, some consultant was trying to help us out and said, "Oh, don't talk about immigration.”

But the first time I went to all 39 counties and I just stopped in downtown Main Streets, the number one thing people talked about was a need of workforce, and when I started talking to grain elevators and we have in Greene County their grain elevator needed 39 employees to help with the harvest, and they didn't get one American citizen to apply for that job, and that's what we're seeing throughout the district.

And so it's so bizarre to have a congressman who is so distant from what the district actually needs, and that's why our message was picked up so well. And so it's strange to live in the 4th District and not understand the just drastic need of immigration reform.

Bonus Question: What advice would you give your teenage self?

Whether it was chasing baseball, playing baseball in seven different countries, having the opportunity to work in different places in America, but you always remember where your home is and my home is in Iowa, and to be able to go back and do something that you're passionate about, there's an article in The Atlantic that changed my life forever and it said, "Life's not about the pursuit of happiness; it's about the pursuit of meaningfulness.”

I was happy playing baseball, I was happy traveling and meeting amazing people, but my meaning is in Iowa, and nowhere did I see that more relevant than when I ran for Congress in 2018.

Want to catch more Making Progress interviews? Check out our recent interviews with Black Lives Matter co-founder Alicia Garza and Pennsylvania State Rep. Summer Lee. You can check out interviews with four people running for the Democratic presidential nomination at Daily Kos’ YouTube channel. We’ll release a new and exclusive interview with a progressive organizer, leader, or politician every Tuesday.