Remember the tan suit? Media 'optics' police who hounded Obama and Clinton for years now give Trump a pass 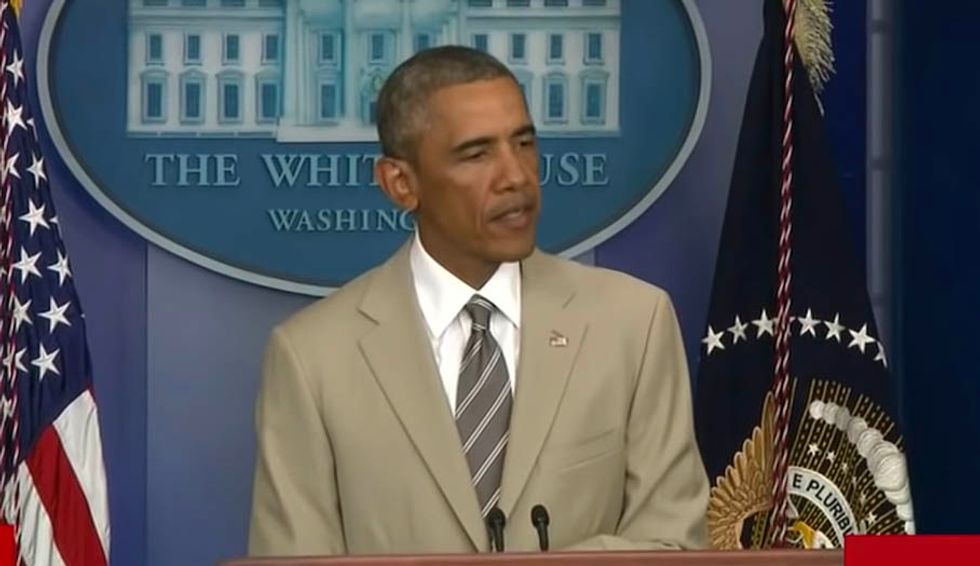 What a difference a new administration makes. After spending years as self-appointed patrollers of so-called political optics, relentlessly ticketing Democrats Barack Obama and Hillary Clinton for supposedly major and minor infractions, the D.C. press has dropped that pursuit under Donald Trump.

No longer obsessing over how things look or bemoaning a lack of proper theatrics, Beltway journalists have shelved that pursuit under the current Republican president, whose optics are routinely horrendous as he tweets out racist taunts, bullies adversaries, and buddies up to foreign dictators. Faced with an openly corruptpresident who doesn't even try to hide his misdeeds, the media's police squad has gone into hiding and stopped handing out tickets altogether.

As a rule, there was no brazen corruption or lawbreaking when recent Democratic presidents were in office, so the press had to lean into "optics" in order to create drama and allegations of wrongdoing. The optics-based attacks also helped amplify Republican narratives and attacks on Democrats. The media's same misguided approach was applied to Clinton's 2016 campaign. And the press claims were always the same: We can't find any actual evidence of wrongdoing, but we just don't like the way things look.

Interestingly, the optics beat was recently resurrected—not to judge and assess Trump, but to belittle former special counsel Robert Mueller and his congressional testimony on Russian interference in the 2016 election. Donning their theater critic caps, reporters and pundits rushed out to announce that the optics of the testimony were flat, and that the hearings had been a "flop" for Democrats and their push for impeachment. It was a GOP-friendly conclusion that turned out to be completely erroneous.

Most people look back and laugh at the media kerfuffle that erupted when President Barack Obama wore a tan suit to a press briefing during the summer of 2014. People laugh because, in hindsight, the press outrage seems to be so ridiculously petty and pointless. (It's a suit!) But at the time, it was a big deal for the Optics Police, and journalists were serious in their anger.

Obama was sending the wrong message, they claimed. Obama misread the room. Obama was ignoring Beltway traditions. On and on that kind of nitpicking coverage continued for all eight years of Obama’s presidency, as pundits kept insisting America's first black president just couldn’t quite find his groove and hit the right savvy optics chord. (Why didn't he schmooze more?)

And let's not forget that the media's entire Clinton Foundation witch hunt, which raged through 2015 and 2016, was built entirely around supposed bad optics.

Journalists were completely open at the time that they could not find any wrongdoing by the Clintons or the foundation—no evidence of conflicts of interest or of Clinton selling State Department access to donors—yet the story remained hugely important because, they said, it looked bad. Indeed, “optics” became the go-to campaign theme for journalists who couldn't find any proof of Clinton malfeasance. (See also: the campaign coverage of her paid speeches.)

“Let’s be clear, this is all innuendo at this point. No pay for play has been proven. No smoking gun has been found,” announced NBC’s Chuck Todd. “But like many of these Clinton scandals, it looks bad.” "There's no question the optics are bad for Clinton and the Clinton Foundation," NPR said, while conceding that "no proof has emerged that any official favors—regulations, government contracts, international deals—were curried in exchange for donations or pledges." And from CNN's Anderson Cooper: "At the very least, there is an appearance of a conflict of interest for the foundation.”

It got so weird that some newspaper editorial boards demanded the Clintons shut down their A-rated landmark global charity simply because the optics were bad, because it didn't "look good" in the eyes of the accusatory Beltway press. The Optics Police were furious.

Most of that type of commentary got packed away once Trump was sworn into office, but was dutifully brought back last month in order to ding Democrats once again. Mueller’s testimony before congressional committees about the Russia investigation painted a devastating picture of a White House hijacked by a criminal enterprise and a president who does not shy away from obstructing justice and betraying his country for personal gain. But, uh oh! The optics were all wrong.

"On substance, Democrats got what they wanted: that Mueller didn’t charge Pres. Trump because of the OLC guidance, that he could be indicted after he leaves office, among other things," NBC's Chuck Todd announced. "But on optics, this was a disaster."

Fox News' Chris Wallace called the hearings "a disaster for the Democrats." “Impeachment’s over,” ABC News' Terry Moran announced, noting that Democrats “needed more fuel for any kind of impeachment effort.” CBS News' Major Garrett claimed that Mueller lacked the look of a "matinee idol or the central galvanizing figure of that drama." And CNN's David Axelrod said the hearings were “very, very painful to watch.”

"The grossness continued Thursday morning as both the Washington Post and the New York Times ran articles declaring that Mueller's inability to play to the cameras means that any hope of impeachment is probably dead," noted Amanda Marcotte at Salon.

This is where I will remind readers that the Mueller hearings were such a "disaster" for Democrats—indeed, such an optics failure—that 25 (!) additional members of Congress have since come out in favor of impeachment proceedings against Trump. Talk about the media completely missing the story. But that's what happens when they're blinded by a Democratic "optics" pursuit.

It's so strange that they have so little interest in applying those same optics standards to Trump.