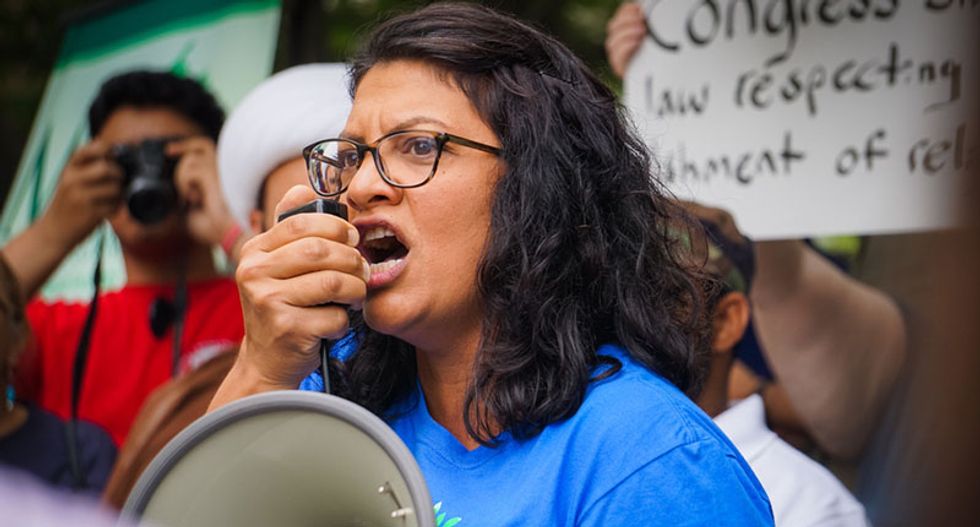 After receiving permission from Israel to visit her grandmother in the occupied West Bank on humanitarian grounds, Rep. Rashida Tlaib decided Friday morning to forego the trip, calling the restrictions an example of "oppressive conditions" that represent everything the congresswoman stands against.

According to The Washington Post, "Tlaib said she had decided not to travel to Israel under conditions that would have included a pledge in writing not to 'promote boycotts against Israel' while there," an unacceptable provision for the Michigan Democrat.

In a statement announcing her decision, Tlaib was defiant.

"I am a duly elected United States Congresswoman," Tlaib said, "and I will not allow the Israeli government to humiliate me and my family."

Tlaib's decision came after a tumultuous 24 hours in which the Israeli government banned Tlaib and her colleague Rep. Ilhan Omar (D-Minn.) from entering Israel based in part on the encouragement of U.S. President Donald Trump and on the lawmakers' support for the nonviolent resistance movement known as BDS—short for Boycott, Divestment, and Sanctions—which aims to use economic pressure to end the occupation.

According to The New York Times:

An Israeli official close to the prime minister's office said on Thursday that a call came from the Trump administration as recently as this week pressing Mr. Netanyahu to bar the congresswomen. The official, who spoke on the condition of anonymity to discuss delicate information, said the prime minister found himself in a "lose lose" situation, having to choose between upsetting Mr. Trump or the Democrats.

As Common Dreams reported Thursday, the decision to bar the congresswomen angered progressives who saw it as an "attempt to silence hard truths about the occupation will backfire."

And, wrote New York Magazine's Eric Levitz, it may already have backfired:

It's hard to imagine a better way of hardening young, nonwhite Democrats' skepticism toward Israel than prohibiting two of America's most prominent nonwhite Democratic politicians from visiting the country. Which is to say: On Thursday, Trump and Bibi did more to aid the BDS movement (and less radical allies of the Palestinian cause) than Omar and Tlaib's trip ever could.

The Israeli government said that it would reconsider if Tlaib applied to enter the country on humanitarian grounds and refuse to engage in boycott activities. Tlaib acceded to that demand, and received permission, but reversed her acceptance of the conditions hours later.

In a series of tweets, Tlaib explained that despite her desire to see her family, particularly her grandmother, the conditions on Tlaib's visit were too onerous and were seen as intended to kill her spirit.

"I have decided that visiting my grandmother under these oppressive conditions stands against everything I believe in," said Tlaib, "fighting against racism, oppression, and injustice."

Attorney and professor Noura Erakat tweeted that Tlaib was faced with an impossible decision.

"What Israel proposed to Rashida Tlaib was their age-old proposition: you can stay in your homeland as a humanitarian exception—without political rights— and on condition you surrender and cease to resist," said Erakat. "Thank you Rashida for rejecting these terms and making it clear what is at stake."

What Israel proposed to @RashidaTlaib was their age-old proposition: you can stay in your homeland as a humanitaria… https://t.co/KYtG6gmDwO
— Noura Erakat (@Noura Erakat) 1565961453.0

Journalists weighed in on Tlaib's choice to reject the Israeli offer of a visit on restrictive grounds.

"Rashida Tlaib was offered permission by the Israeli government to visit her family in the West Bank—on the condition she doesn't talk about the boycott, divestment, and sanctions movement which seeks to end the system of occupation that her family lives under," said Novara Media editor Ash Sarkar. "This is disgusting."

Jewish Currents editor David Klion delivered a blistering couplet of tweets on Tlaib's decision and the bad faith interpretations of her choice to not visit Palestine.

"I'm going to go a step further," said Klion. "To weigh in on this like it's open for debate, like you individually have the right to determine whether her conduct makes sense and is worthy of being granted a visit, is racist, in a way that precisely replicates the racism of Israel's occupation."