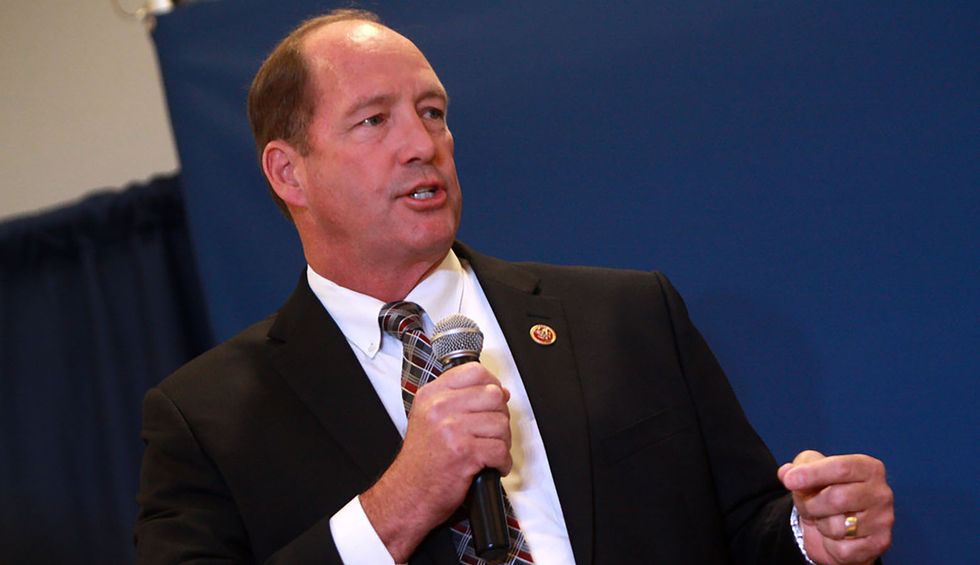 On Monday, Rep. Ted Yoho (R-FL) was the only Republican lawmaker willing to come on CNN to talk about next steps in the wake of the mass shootings in Texas and Ohio — and he flailed frantically as reporter Jim Sciutto shot down his NRA talking points one by one.

“I know you represent Florida, Parkland, you have experience in this,” said Sciutto. “Let’s start with what happens now. You know what needs to be done. You heard the president in a tweet raise the issue of background checks. He’s going to speak shortly. We’ll see if he follows through on that again. Would you support universal background checks as a piece of legislation?”

“I’d have to look how the legislation is written,” said Yoho. “I support background checks now. If it gets too inclusive or encumbering, I’d have to wait to see it before I can answer that … I don’t want to have a knee-jerk reaction that we move on a motion instead of coming together for a solution for this long-term.”

“That part is not,” said Yoho. “When a grandfather wants to pass on a gun to his grandchild or a friend wants to pass it to his friend, I think you can get into just the Second Amendment where people have the freedom to do those things. What we don’t talk about is the responsibility people have. We as Americans, this is a mental health issue and this is a responsibility of all citizens from the family members to the school members to the church members to the local community to make sure that the people that are having challenges like these young men that we’re seeing, that they get directed in the right areas and that the red flag laws that we have on the books are enforced by the local police force, by the FBI.”

“I know speaking to mental health is something of a safe space for lawmakers,” said Sciutto. “Let me show you a picture of the weapon used in Dayton, the magazine. I want to ask you if this weapon and this magazine that has 100 rounds — I spent ten years covering wars in Iraq and Afghanistan. Congressman Yoho, I never saw anything like that there. Does an American have the right to buy that? That allowed him to kill nine people in less than a minute. Should that be legal?”

“The way I understand it, it’s already illegal in the state of Ohio,” said Yoho. “My personal belief is, no, I don’t need something like that.”

“State laws — you know as well as me state laws don’t do the job,” said Sciutto. “In the Gilroy shooting, the weapon was illegal in California so he bought it in Nevada and drove it across the border. You know these have to be national laws to make a difference.”

“They do. You can get rid of the guns, and we saw what happened in Japan. People used arson and killed 30 some people. Somebody used a knife and they killed three people. Bad people are going to do bad things.”

“You can’t kill nine people in 40 seconds with a knife, Congressman, to be fair,” said Sciutto. He walked in there with a semiautomatic weapon.”

“Can you grant that the weapons make a difference?” said Sciutto.

“I mean, what about that young man that was blowing up things in Texas, you know, or Timothy McVeigh,” said Yoho. “Of course that was a terrorist attack against the government. He blew up that whole building and killed hundreds of people. Bad people are going to do pad things if they are intent on doing that. What we can do is do everything we can to keep guns out of people’s hands that post things on the Internet. Big Tech has a big responsibility in this. They are searching this. Information, collecting this data. They have been doing this for these things need to be reported and they need to have these people look into that that are posting manifestos out there. They have the ability to do that instantaneously.”

“Congressman, forgive me. It just sounds like this moment will be no different,” said Sciutto. “The points you’re making, making an issue of mental health not the guns or magazines, questioning universal background checks, those are points I and viewers have heard before after tragedies like this. I have to ask the question, what’s different this time? Based on what you’re saying, it doesn’t strike me there’s support among Republicans in Congress to do something different this time. Do I have that wrong?”

“Yeah, I think you have that wrong,” said Yoho. “You’re asking me to comment on something I haven’t seen legislation. That would be irresponsible … To have a knee-jerk reaction and say we’re going to Washington and we’re going to fix this in two or three days is a joke.”