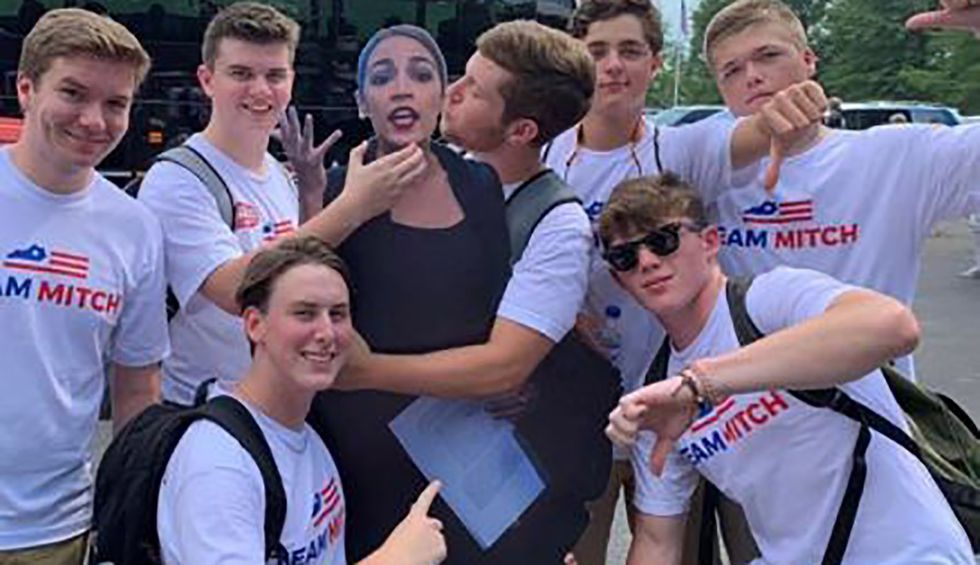 "Hey Senate Majority Leader—these young men look like they work for you."

That was Rep. Alexandria Ocasio-Cortez's response on Monday to a photo of several young men in "Team Mitch" t-shirts kissing, groping, and choking a cardboard cutout of the New York congresswoman.

The caption of the photo of Sen. Mitch McConnell (R-Ky.) backers, originally posted on Instagram, reads: "Break me off a piece of that."

"Just wanted to clarify: are you paying for young men to practice groping and choking members of Congress with your payroll, or is this just the standard culture of #TeamMitch? Thanks." Ocasio-Cortez tweeted Monday evening.

The photo of the McConnell supporters went viral after it was posted to Twitter by user @emrazz.

"Pictured: seven young white men in 'Team Mitch' t-shirts, gathered round a distressed looking cardboard AOC, groping and kissing her," she wrote. "The caption, 'break me off a piece of that.' Future federal judges of America."

McConnell's spokesman said in a statement that the Kentucky Republican "in no way condones any aggressive, suggestive, or demeaning act toward life-sized cardboard cutouts of any gender" and said the young men are not officially affiliated with McConnell's Senate campaign.

But as HuffPost reported, "Some of the same men also appeared in a photo on the official 'Team Mitch' Instagram account for the Fancy Farm picnic, holding aloft cutout faces of Supreme Court Justices Brett Kavanaugh and Neil Gorsuch."

"The photo was the second controversial image to come out of Team Mitch’s participation at the Fancy Farm picnic," according to HuffPost. "Another photo showed cardboard gravestones, including one with the name of the Kentucky senator's Democratic challenger in 2020, Amy McGrath. The campaign tweeted the image under the headline: 'The Grim Reaper of Socialism.'"

The photo was posted hours after the racist massacre in El Paso, Texas, which left 22 people dead.