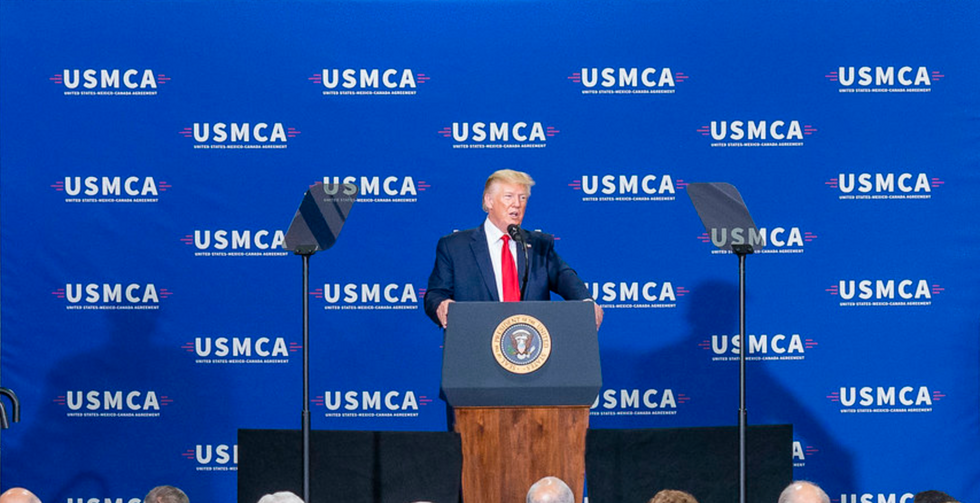 Democrats are still smarting from their 2016 loss in Wisconsin and handful of other swing states, despite Hillary Clinton's success in winning the popular vote, so figuring out how to win over these key areas had become a major priority for the party as eyes turn to 2020.

With that in mind, Change Research in conjunction with Crooked Media conducted a poll in the Badger State to assess President Donald Trump's strengths and weaknesses.

"Anyone who thinks Donald Trump will be easy to beat in Wisconsin is sorely mistaken, and the path to the White House for a Democrat gets very narrow without Wisconsin," wrote Dan Pfeiffer, a former adviser to President Barack Obama. "But our poll reveals a path to defeating him there."

Jon Favreau, another former Obama aide and founder of Crooked Media, pointed out one of the poll's most interesting findings:

According to the poll, 50 percent of voters said that message made them less likely to vote for the president.

Some disputed the "nearly $1 trillion" figure, and Favreau said that the actual number is $875 billion, $300 billion or so of which is reallocated to the Department of Health and Human Services in Trump's budget. Politifact has disagreed with similar claims when made by Joe Biden, arguing: "A more accurate figure lies between $515 billion and $595 billion. Just about all of the reductions target providers and there’s broad agreement that hospitals and other providers could be more efficient."

But Favreau argued that these exact figures are not likely to matter too much, especially when other proposed cuts to Medicaid and Social Security can be included. The main point of the poll is that it suggests emphasizing Trump's tax cuts for wealthy people and contrasting them with his proposed cuts for valued social services may be a strong way to convince voters in key states to vote against the president.

Other persuasive messages that moved voters: - Trump used the White House to enrich himself and his family busines… https://t.co/Qr0KLjXFUY
— Jon Favreau (@Jon Favreau) 1565879159.0

It seems Democrats will need a strong message if they want to beat Trump in Wisconsin and similar states. As it stands, the poll shows the 2020 race in the state as essentially a dead heat.

Of course, all this is subject to change in the near year, as the economy remains in flux and the Democratic primaries continue.