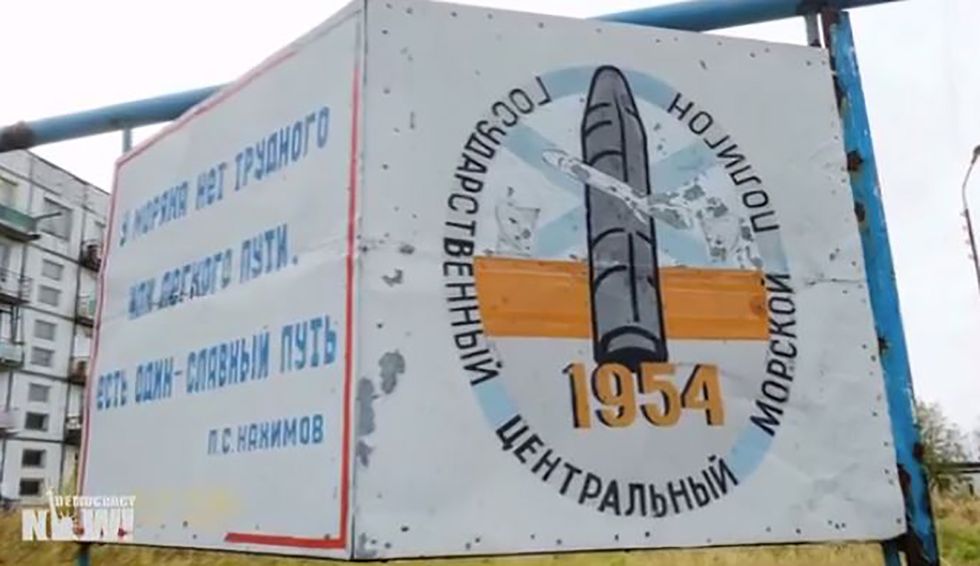 Questions are swirling over a mysterious nuclear accident in northern Russia on August 8. Seven people, including five nuclear scientists, died in an explosion, which caused a radiation spike in the surrounding area — and possibly as far as Scandinavia. U.S. experts suspect the explosion was caused during a test of a nuclear-powered cruise missile. Russia initially denied a radiation leak, but earlier today its state weather agency confirmed radioactive isotopes have been found in test samples in the city of Severodvinsk near the military test range. Norway’s nuclear test ban monitor now believes two explosions likely occurred on August 8, with the second one being the likely source of radiation. Russia’s handling of the nuclear accident has drawn some comparisons to the Soviet Union’s cover-up of the 1986 nuclear disaster in Chernobyl, which is considered the worst nuclear accident in history. We speak with Kate Brown, a professor of science, technology and society at MIT specializing in environmental and nuclear history. Her new book is “Manual for Survival: A Chernobyl Guide to the Future.”

AMY GOODMAN: Questions are still swirling over a mysterious nuclear accident in northern Russia August 8th. Seven people, including five nuclear scientists, died in an explosion which caused a radiation spike in the surrounding area, possibly as far as Scandinavia. At least two of the deaths have been linked to radiation sickness. U.S. experts suspect the explosion was caused during a test of a nuclear-powered cruise missile. Russia initially denied a radiation leak had occurred, and four Russian nuclear monitoring stations went silent after the blast. But earlier today, Russia’s state weather agency confirmed radioactive isotopes have been found in test samples near the military test range. Russian agencies have also given out conflicting information about what was happening at the time of the explosion. Norway’s nuclear test ban monitor now believes two explosions occurred August 8th, with the second one being the likely source of the radiation. Norway has also said it has found small amounts of radioactive iodine near its Arctic border with Russia.

Russia’s handling of the nuclear accident has drawn some comparisons to the Soviet Union’s cover-up of the far more severe 1986 disaster at the nuclear plant in Chernobyl, which is considered the worst nuclear accident in history. It sent a cloud of radioactive fallout into Russia, Belarus and over a large portion of Europe. Fifty thousand people living in Chernobyl’s immediate surroundings had to be evacuated, and a vast rural region became uninhabitable. The death toll from Chernobyl remains unknown. Estimates range from under 100 to up to 4,000.

We go now to Boston to speak with Kate Brown, professor of science, technology and society at MIT specializing in environmental and nuclear history. Her new book is Manual for Survival: A Chernobyl Guide to the Future.

Professor Brown, welcome to Democracy Now! It’s great to have you with us. Can you talk about what we know so far about this nuclear accident in Russia, where it is, the fact that the four closest nuclear monitoring stations have been silent since the blast?

KATE BROWN: Yes. I mean, what people are saying in the Russian blogosphere is this is Chernobyl redux. And this is a big problem with any nuclear installation. They are under lock and key. They are surrounded by gates and guards. And the public has very little access to it. So, there are 40 closed nuclear cities in Russia, and this area where — Nyonoksa is another closed nuclear city, near Arkhangelsk up in the Russian north. And when this explosion occurred, there was lots of confusion, as you said. The monitors were shut down. People went to the web, and they recorded, with their own Geiger counters, different, varying accounts.

But we think there was about a 16 times higher spike than background that occurred because of the accident. It was definitely a tragedy, seven people dying because of it. And the doctors at the hospital were really angry because they weren’t told they were working with people who had been exposed to radioactivity. They were in a critical ward where there was perinatal babies, there was people in critical condition. And the doctors themselves were exposed because of these bodies that were brought in that had had radioactivity on them.

AMY GOODMAN: And the reports now of two people who didn’t die in the actual explosion — I don’t know if it was two of the nuclear scientists — but on the way to the airport, of radiation sickness and exposure.

KATE BROWN: Yes, yes. And this has caused a lot of consternation in Russia. And it’s led us to think again about situations like Chernobyl, where leaders in Russia and in other parts of the world have these accidents, it’s difficult to detect, and certainly you can’t sense radioactivity, but it is something that causes — has lethal consequences, and it also has subacute consequences that make people very sick. People get nervous. They don’t know what’s going on. And governments control the landscapes in which these accidents occur, and are not terribly forthcoming about what’s going on. And Russia is a prime example of this.

AMY GOODMAN: U.S. experts suspect the explosion was caused during a test of a nuclear-powered cruise missile. What do you understand caused this explosion?

KATE BROWN: Well, they were fueling — from what I understand from reports, they were fueling with radioactive isotopes the combustion of the missile. So, that makes this missile a very long-lasting one, one that can be controlled. And it doesn’t burn out easily, so it can sort of circumnavigate the Earth. It’s a new class of nuclear missiles. And it makes — it amps up the arms race. Both the U.S. and Russia have committed trillions of dollars to renewing their nuclear weapons. And I think this often is beneath — goes beneath the radar of the media. During the Cold War, there was lots of threats made back and forth, and people knew we had a nuclear arms race going on. We’ve forgotten about that since the end of the Cold War, even though we’re still in the midst of the same kind of process as during the Cold War.

AMY GOODMAN: So, you have that, which was a possible test of a new nuclear cruise missile. And then you have the U.S. sort of boasting, putting out video of its own test of a cruise missile, off Long Beach in California. And then you have President Putin saying he’s going to respond, saying that the U.S. pulled out of the INF agreement, the Intermediate Nuclear Forces — the INF agreement, just recently Trump pulled the U.S. out of it, simply so he could test that missile.

KATE BROWN: Yeah. I mean, we’re heading towards a dangerous situation. In 1963, the major powers, including the Soviet Union, the United States, banned the testing of nuclear weapons into the atmosphere. That testing caused a great deal of damage. I mean, if we look at relative numbers, 45 million curies of radioactive iodine, which is a very dangerous short-live iodine that goes right to human thyroids and causes cancers and disease and all kinds of other fallout problems in the body — 45 million curies from Chernobyl accident, 20 billion curies from the U.S. and the Soviet Union alone testing nuclear weapons in the 1960s. So, if we’re going to go back to a period of testing weapons, I fear that our already escalating rates of cancer, especially thyroid cancers, which are off the chart, will continue to cause a real problem for human health globally.

AMY GOODMAN: You just came from Estonia. Were people in the Baltics concerned about what’s taking place?

KATE BROWN: Yes, people are concerned about what’s taking place, but they’re even more concerned about how they’re going to solve their fossil fuel problems. They have shale oil, is what powers their electricity in this tiny country in the Baltics, and they know that they make a very big footprint in terms of producing carbon into the atmosphere. So, there’s two Green parties in Estonia. They’re both on the right. And they both want to commit to nuclear reactors. And a lot of people are nervous about it. They’ve lived in the shadow of Chernobyl for the last 30 years.

AMY GOODMAN: We’re going to go to a break and come back to talk about what happened in Chernobyl and what lessons can be learned. Kate Brown, professor of science, technology and society at MIT, the Massachusetts Institute of Technology, specializing in environmental and nuclear history. Stay with us.