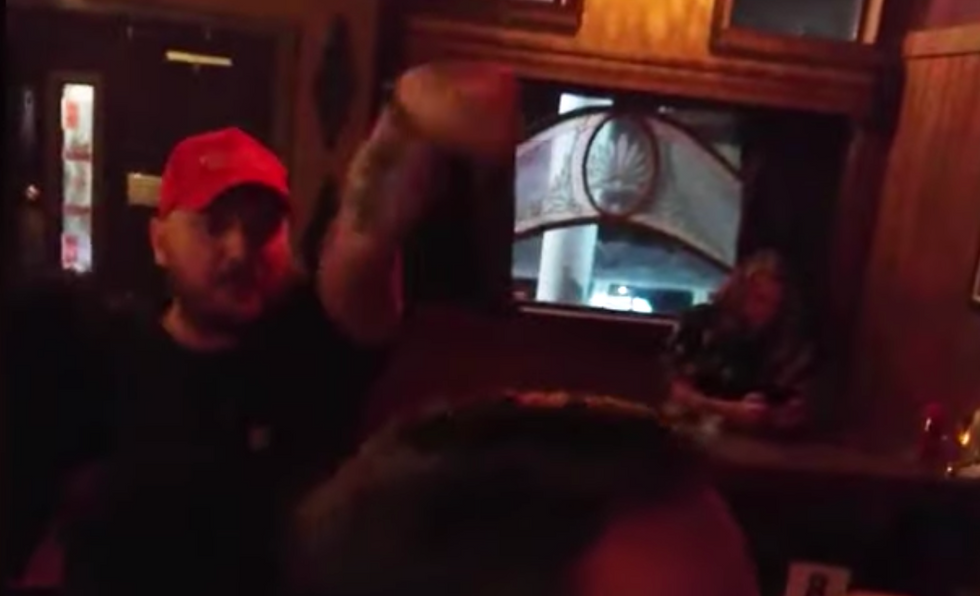 Portland media reported Sunday that two bar patrons were arrested, after a confrontation with MAGA-hat wearing Luke Lenzner left Lenzner with a black eye—but his story continues to fall apart. The Trump supporter told KPTV that he was out having a nice calm evening on a date night with his wife, when everybody suddenly started being mean to him, just because he was wearing a MAGA hat. Things escalated from verbal to physical when the couple went outside, according to Lenzner, "I got mobbed by everybody that was in that bar outside. People came from the inside out—just circled me and my wife."

Security footage didn’t exactly prove Mr. MAGAmacho’s account to be true, but he does seem to have been assaulted by a couple—22-year-old Leopold A. Hauser and 23-year-old Adebisi A. Okuneye—who Lenzner had a conflict with during his and his wife’s brief time inside of Growler’s Taproom. The report says that Mr. and Mrs. MAGAromance went into the bar, but last call was already over and the bar was closing.

An affidavit says that Lenzner’s wife told her husband to wear the hat around to a bunch of bars, in order to see how people responded. Sort of a classic MAGAdatenight type of activity. At the time, Mr. MAGAmushybrain told KATU that “We have never felt so much hate in Portland as long as we lived here it [sic] really sad that people think they can harass people because of a hate there's so much hate in this city and it's sad.” According to that same affidavit, Okuneye said that Lenzner came out of the bar and yelled, “B---- do you like my hat?” She said she was pulled away, and did not know who punched Mr. MAGAafterhours.

Then, on Tuesday, new footage appeared, showing Mr. Lenzner in a yelling fight with patrons at a different bar, the Vern, just a couple of hours before he got a black eye at Growlers. In the video, Mr. MAGAdranktoomuch screams “You live in America, right? I serve for fucking you!” Mr. MAGAuniverse is then calmly asked to leave. The bar employee even says “please.”

He drops another F-bomb, while others talk about wanting to de-escalate the situation. Mr. MAGAmazing then yells “Come on outside, see what happens,” to which a couple of people reply, “No one wants to fight,” and “Nobody wants to fight you, dude.” People clap after he leaves. Later, of course, Mr. MAGAfantastic did find someone who was willing to “come on outside,” to “see what happens,” in response to his classic MAGA display of self-aggrandizing cowardice and victimhood.

In the least surprising turn of events, it was soon revealed that Mr. Lenzner didn’t serve in our armed forces, any more than his revered Donald Trump has. It’s not necessarily a case of “stolen valor,” the term used for frauds pretending they are decorated military folks, but it’s the MAGA-low level equivalent. Mr. MAGAmightymilitaryman told KATU that he “regretted” saying that and blamed it on being in the heat of the moment. Let’s think about that for the briefest of moments. And … [coughs] … we’re done.

Michael Radosevich, who shot the video at the Vern, explained to the Oregonian that he rolled camera because the moment Mr. MAGAmindinghisownbusiness came into the bar, Radosevich knew he was looking for a fight. “It’s not adult behavior to go out and troll people. And that’s all this was. One giant troll.”

When asked about his outburst at the Vern, Mr. MAGAstorychanging told KATU that he and his wife had been sitting at the end of the bar, just minding their own business, when someone placed a toilet seat cover on his head. After reports of the toilet seat cover emerged, a man, known only as “Jim,” came forward.  said placed it on his head, but that that wasn’t actually what happened. According to “Jim,” Mr. MAGAmakeitupncame into the Vern, glaring and “mean mugging,” everyone. “Jim” admitted that after a trip to the bathroom, he brought Lenzner a souvenir.

JIM: I came up. I sat down my empty glass. I put the toilet seat cover next to him on the bar top, and I said “Hey man, I got you this [expletive] hat. It’ll be a step up from the one you’re currently wearing.”

KATU then went back to Lenzner, who did concede that “Jim’s” account was the truth.

Like virtually all of his fellow MAGA hat wearers, Luke Lenzner is a MAGAmess. You can watch Mr. MAGAssh*le lie below.