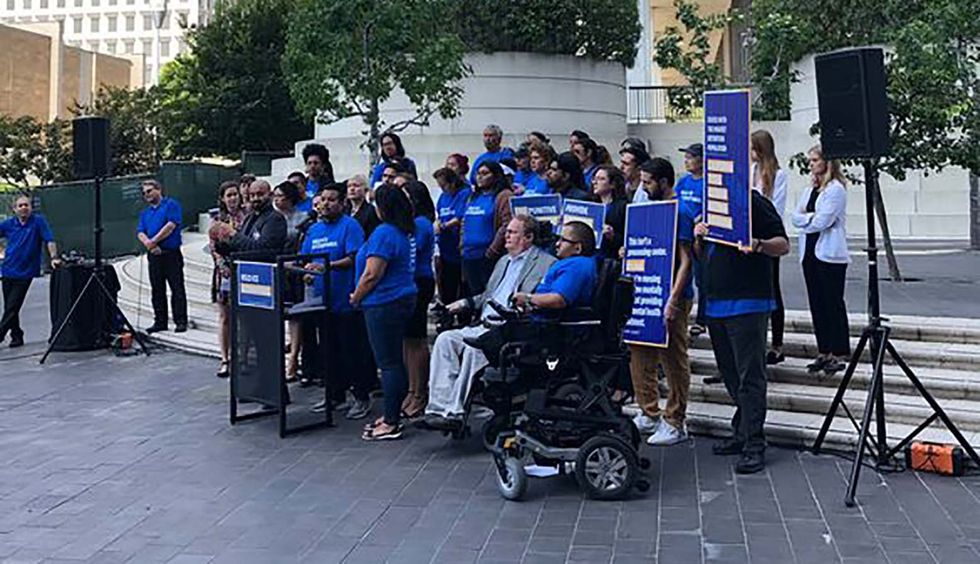 A class-action lawsuit filed in Los Angeles Monday on behalf of 55,000 detainees accuses the Trump administration of systematically denying adequate food, medicine, and other basic necessities to migrants in ICE facilities nationwide.

The suit alleges that the widespread mistreatment and brutal conditions inside the Trump administration's detention centers amount to torture and have driven some asylum-seekers to "accept deportation out of a desperate desire to escape."

"The atrocious conditions in immigrant detention are an open secret," said Tim Fox, co-executive director at the Civil Rights Education and Enforcement Center, one of several advocacy groups that joined the suit.

The lawsuit details the horrific experiences of a number of detained immigrants, including some with chronic illnesses and disabilities.

As the Guardian reported:

Melvin Murillo Hernandez suffered allergic reactions so bad he had to be hospitalized four times. Martín Muñoz had no access to insulin for ten long days. Denied a wheelchair, Faour Abdallah Fraihat was unable to get to the cafeteria...

The plaintiffs, who live with conditions ranging from cerebral palsy and bipolar disorder to blindness and schizophrenia, accuse the US government of denying jailed migrants food, medicine, surgeries, and the most basic accommodations for disabilities.

The suit filed in Los Angeles on Monday outlines individual experiences at eight different facilities, but immigration lawyers say the mistreatment is representative of systemic problems that affect tens of thousands of people. The complaint comes as the Trump administration escalates its efforts to make it harder for asylum seekers and migrants from certain countries to come to the U.S.

Lisa Graybill, deputy legal director for the Southern Poverty Law Center, noted in a statement that conditions in ICE facilities are often deadly and likely to get worse as the Trump administration rapidly expands its detention dragnet.

"This administration's horrific mistreatment of immigrants is not limited to individuals at the border," said Graybill. "The fact that immigrant detention is supposed to be civil, and not punitive, is a distinction without a difference when it comes to how detained immigrants are treated."

"At least 26 people have died [in ICE custody] since Trump took office," Graybill added, "and tens of thousands have suffered as a result of the federal government's abject failure to provide basic medical care at the facilities where taxpayers are spending billions to detain immigrants. More will suffer, and more will die, without court intervention."