Julián Castro buys ad on Fox News to tell Trump: 'Americans were killed because you stoked the fires of racists' 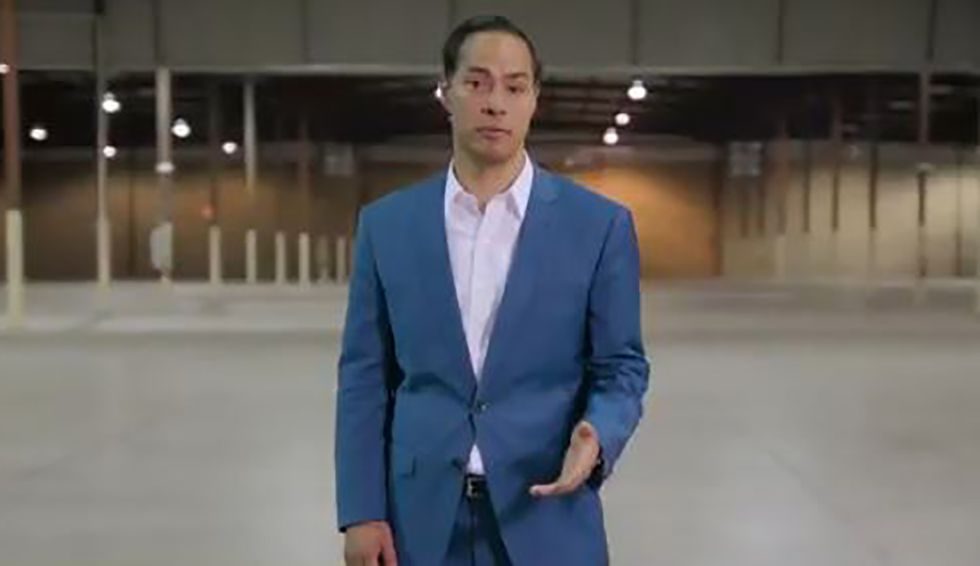 Julián Castro, a Democratic candidate for president, plans to release a television ad Wednesday on Fox News connecting President Donald Trump to a recent attack in El Paso that federal law enforcement officials have classified as an act of domestic terrorism.

The ad will speak to Trump directly — linking his rhetoric toward immigrants and people of color to that of the shooter in El Paso who killed 22 and left more than two dozen wounded. A spokesman for Castro’s campaign told The Texas Tribune that the ad — a small buy of $2,775 — will air throughout the day on Fox News in Bedminster, N.J. That is where Trump is spending the week at his private golf club, according to The Washington Post.

“President Trump: You referred to countries as shitholes,” Castro is seen saying in an empty Iowa warehouse. “You urged American congresswomen to ‘go back to where they came from.’ You called immigrants rapists.

News of the ad comes more than a week after the shooting at an El Paso Walmart. Besides Castro, several other prominent officials and politicians, including U.S. Rep. Veronica Escobar, D-El Paso, and fellow Democratic presidential candidate Beto O’Rourke, have cited Trump’s divisive rhetoric for inspiring the attack. Authorities are investigating a hate-filled manifesto, allegedly authored by the shooter in El Paso, warning of a “Hispanic invasion of Texas” along with other racist and xenophobic language.

“I don’t know who Joaquin Castro is other than the lesser brother of a failed presidential candidate (1%) who makes a fool of himself every time he opens his mouth,” Trump tweeted, referring to Julián Castro. “Joaquin is not the man that his brother is, but his brother, according to most, is not much. Keep fighting Joaquin!”

Julián Castro responded to Trump a short time later with his own tweet, but ahead of the September Democratic presidential debates — which Castro has yet to qualify for — the ad gives the former housing secretary an outlet to show voters he’s not afraid to take on Trump directly.

In a statement, Castro’s campaign manager, Maya Rupert, denounced Trump’s racist comments about immigrants and painted Castro as the candidate best equipped to stand up to Trump.

“Julián isn't afraid of Donald Trump or his bigoted agenda, and will continue to expose his racism and division until he defeats him next November,” Rupert said in a statement.