'It is a f**king circus': Trump is running a media access con game — and winning 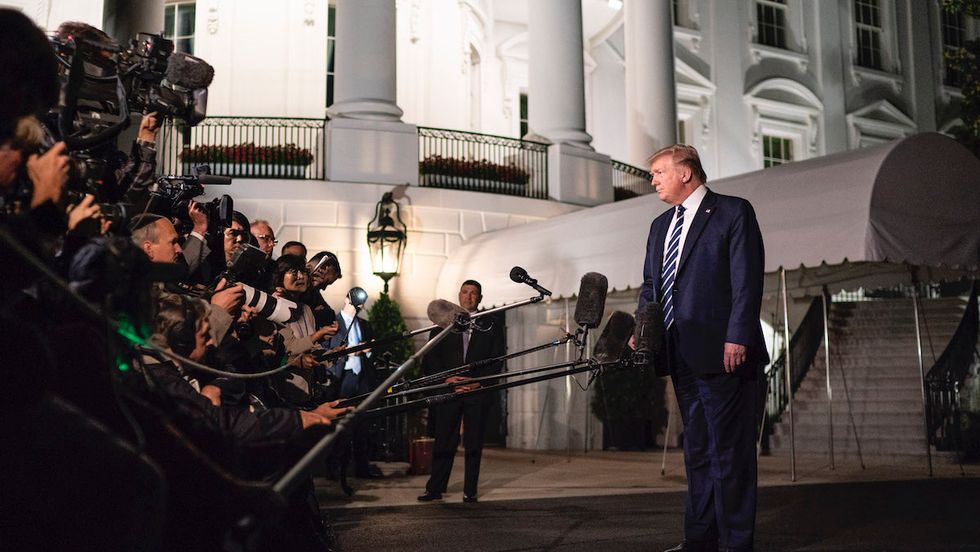 President Donald J. Trump talks to members of the press on the South Lawn of the White House Friday, Aug. 23, 2019, prior to boarding Marine One to begin his trip to France where he will attend the G7. (Official White House Photo by Joyce N. Boghosian)
Eric Boehlert
,
Daily Kos
and
Eric Boehlert
August 27, 2019

The White House is perpetrating a scam on the Beltway press corps, bragging about how much access Donald Trump gives reporters. The whole thing is a ruse, though, and unfortunately, it's another example of how key institutions of American journalism are lying down in the face of Trump’s bullying, not even mustering a fight on behalf of transparency or in the name of maintaining their watchdog status for voters.

Having dismantled White House daily briefings, a longtime hallmark of media access at 1600 Pennsylvania Avenue, the Trump team now has the gall to boast about how much face time reporters get with the president. Press secretary Stephanie Grisham, who has never given a briefing since being hired this summer and likely never will, bragged recently that Trump is “so accessible” that she doesn’t “know what any of the press could complain about." She contemptuously told Politico that “President Trump communicates directly with the American people more than any President in history. The fact that the White House press corps can no longer grandstand on TV is of no concern to us."

The media's supposed overflowing access to Trump comes from the useless sessions that regularly take place on the White House lawn, as a scrum of reporters shout questions at Trump as he prepares to board the Marine One helicopter.

According to research compiled by Martha Joynt Kumar, director of the White House Transition Project at Towson University, Trump surpasses his predecessors in holding these short Q&A sessions with reporters. According to Kumar, the shouting sessions make up 60% of Trump's interactions with reporters, compared to just 17% of Barack Obama's. To date, Trump has stopped more than 80 times for question-and-answer sessions while departing or returning to the White House aboard Marine One or on the tarmac before getting on or off Air Force One. But note that at this juncture of his presidency, Obama had given 24 solo press conferences, compared to just eight from Trump.

What's wrong with the outdoor shoutfests that Trump prefers? He's answering questions from reporters, so that's a good thing, right? Wrong. The controlled chaos, where reporters yell simplistic questions, allows Trump to pick and choose reporters at random, and to simply ignore questions he doesn't like. He’s also immune from follow-up queries and is free once again to lie indiscriminately, without being held accountable.

"From a practical standpoint, the question-and-answer sessions represent something of a free-for-all where President Trump is the ringmaster," noted Kumar in her findings. "While other presidents have held these sessions, they have done so more as a way of responding to reporters between the more formal press conferences than as a substitute for them."

The sessions "are terrible for reporters," one White House reporter recently conceded to Politico. "It is impossible to hear, have a substantive dialogue, ask a follow-up question or do any serious pressing of the president. It is a fucking circus." And that's exactly how Trump likes it. He grants "access" to the media completely on his terms, and often uses the sessions to bash reporters.

And because the sessions are strangely covered as breaking news, the Trump lies are instantly boosted by the press, without providing proper context for them. Media Matters found that "the press is particularly vulnerable to Trump’s gaggle falsehoods, often amplifying his inaccurate claims without correction in cable news chyrons and social media postings." In fact, "roughly a third of the chyrons the networks appended to those gaggles referenced a false or misleading Trump statement -- and ... 95% of those chyrons did not dispute his misinformation," Media Matters' Matt Gertz noted.

This accelerated strategy to choke off press briefings is part of a historic, incremental effort by the Trump administration to lock out the press—and, by extension, the public—from the government’s official duties and business.

Of course, the backdrop for all the phony access talk from the White House is the fact that the Trump team has eliminated daily briefings for the press corps, thereby unplugging the daily give-and-take reporters for decades had enjoyed with the White House press secretary. It was during those sessions, which had been televised for past 20 years, that journalists were allowed to pry at length into administration policy. But all of that evaporated under Sarah Huckabee Sanders, and news outlets never put up a fight.

Rather than take a definitive, collective stand and demand access and accountability, news organizations opted for tentativeness, which allowed the White House to erase the briefings in slow motion—to make their absence the new normal. At this point, the fact that the briefings no longer really exist doesn't matter much, since they have been completely useless for a very long time.

Sanders' no-shows at press briefings became such a problem that White House reporters were forced to dash out onto the grounds when they found out she was  giving a live, friendly interview to Fox News on the White House lawn. That was the only way they were able to ask Sanders questions on camera. Now, rather than being humiliated while effectively chasing the press secretary across the grounds, reporters are instead demeaned during Trump’s outdoor shoutfests.

By the way, all of this was telegraphed at the outset of the administration. "Routine media access to the White House could be a thing of the past under Donald Trump’s presidency," PBS reported in January 2017. And that's exactly what happened. Yet, more than two years later, the largest news outlets in this country appear flat-footed and unsure of how to respond to the unprecedented Trump White House campaign to choke off all meaningful access.