Immigration cruelty may be hurting Trump — but he can't stop 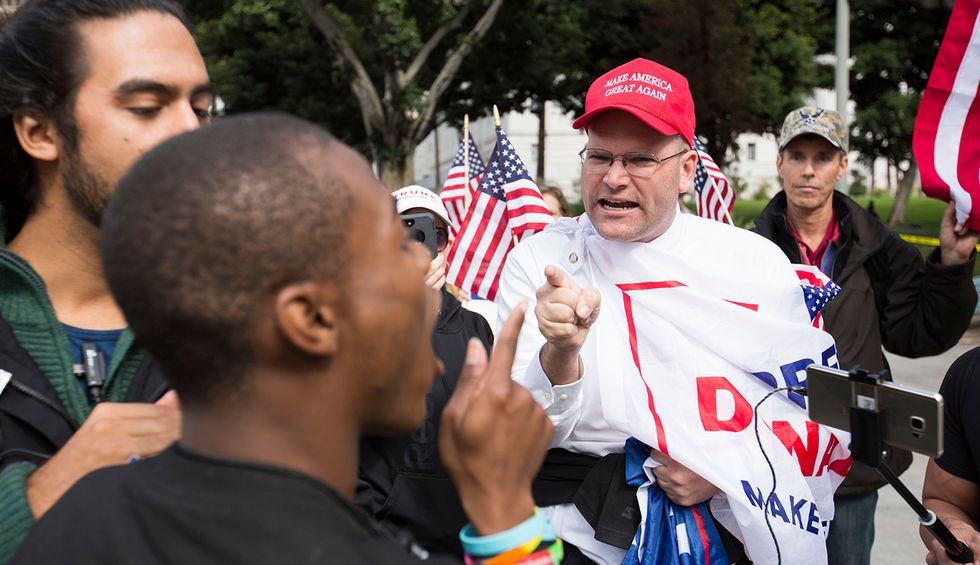 The Trump administration has sought to implement its racist ideology without democratic consensus, a process that has increased with alarming haste this summer. Seemingly every week brings a new barrage of coordinated attacks of cruelty against immigrants, both documented and undocumented. From holding children in crowded detention facilities with no deadline for release to deporting 30-year residents who were brought to the U.S. as six-month-old children to jailing U.S. citizens suspected of appearing Hispanic, summer has brought an unprecedented crackdown on whole communities.

Whether such displays of cruelty are the cause of Trump’s plummeting polling on his signature issue — Trump is now deeply underwater on immigration, with even non-college-educated white voters, a large portion of his base, evenly divided at 47-48 on the issue — or its effect is still up for debate. But the brutality is no longer in question.

Already this week, Trump has followed up on his anti-immigrant campaign with attacks on U.S. service members, children receiving cancer treatments and congressional staffers attempting to engage in oversight. He’s also diverted disaster preparedness funds ahead of hurricane season to his pet project and dangled the possibility of a presidential pardon to incentivize lawlessness in fulfilling his campaign promise of building a border wall between the U.S. and Mexico.

An explosive report published Tuesday night by the Washington Post alleges that Trump has ordered aides to "aggressively seize private land" for the border wall and "told worried subordinates that he will pardon them of any potential wrongdoing should they have to break laws to get the barriers built quickly.” It appears as wanton a case of corruption, if true, as we’ve seen thus far from the Trump White House. The White House has not responded to request for comment on the president's alleged conspiracy to obstruct justice.

On Wednesday, ABC News reported on a Trump budget document that diverted more than $155 million from the Federal Emergency Management Agency, which responds to natural disasters in the U.S., specifically to immigration courts. The plan also calls for $116 million, including nearly $14 million from federal air marshals and $4.3 million for cybersecurity, to pay for nearly 7,000 detention beds and to transport asylum seekers to detention facilities, where the Trump administration announced last week it planned to indefinitely detain families seeking legal passage. Another $155 million would help pay for the administration’s "Remain in Mexico" policy.

"Congress appropriated these funds to meet the American peoples' priorities and I strongly oppose this effort to undermine our constitutional authority," Senate Minority Leader Chuck Schumer, D-N.Y., said in a statement.

Earlier this summer, Trump sent troops to the border to paint the fence for a better "aesthetic appearance" after he diverted military housing funds to pay for his border wall.

This latest planned diversion of congressional funds comes as the Trump administration clamps down on oversight attempts by Congress. On Wednesday, Fox News reported that the Department of Homeland Security had blocked staffers for House Oversight Committee Chairman Elijah Cummings, D-Md., from inspecting detention facilities along the border, an apparent violation of the U.S. Constitution via implied powers, the necessary and proper clause, and federal law.

Democratic staffers have reportedly been blocked from entry due to the staff's tendency to "conduct interviews and take photographs" which "could jeopardize" the department's ability to meet legal obligations.

The Trump administration also abruptly sent notice this week that it would no longer observe the "medical deferred action" program that allows non-citizens to remain in the U.S. to continue receiving life-saving treatment. Families in this program have instead been alerted that they only have 33 days to leave the country, a death sentence in some cases. The administration never even announced the drastic policy change.

“We as a country, we are losing our humanitarian side,” a lawyer for a young girl with cerebral palsy told the Miami Herald. “We’re not reviewing case by case, but we’re just giving a blanket ‘no’ to everyone.” The medical deferral program had been in place for decades, ensuring that individuals could receive medical care that isn’t available in their home countries. USCIS reported that it has received about 1,000 deferred action requests annually over the past few years, but the majority have not been approved by the Trump administration.

Finally, in a not-so-cleverly disguised attack on birthright citizenship under the Constitution, the Trump administration issued a new guidance late Wednesday that threatens to rip apart military families: (emphasis added).

Previously, children born to U.S. citizen parents were considered to be "residing in the United States," and therefore would be automatically given citizenship under Immigration and Nationality Act 320. It is likely this policy change will most directly target service members who adopt children overseas — but what becomes of children born to service members on overseas deployment remains unclear. Considering the Trump administration's longstanding pattern of assaults on the 14th Amendment and birthright citizenship, this new restriction looks to be a first attempt to lay the legal groundwork for a dramatic redefinition of citizenship.