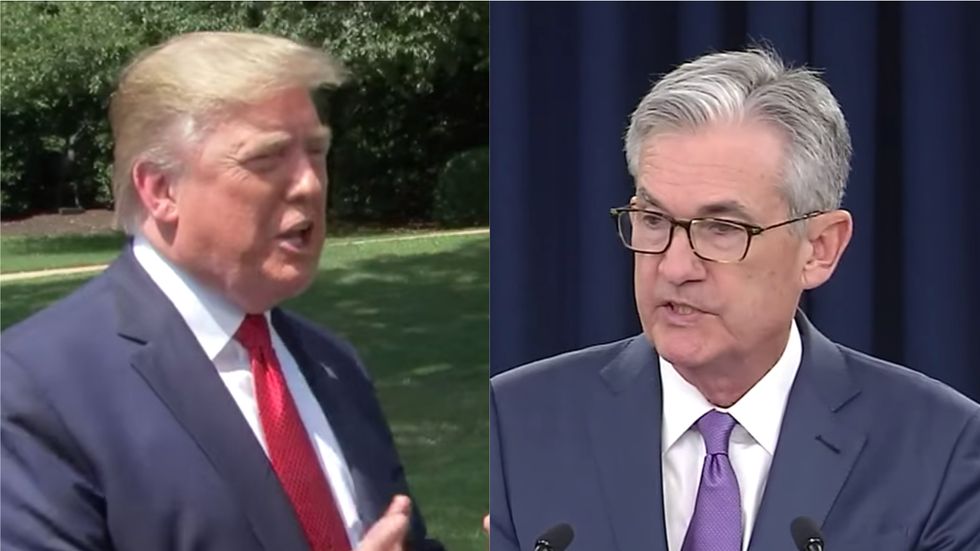 Despite having handpicked Jerome Powell to lead the United States' central bank, President Donald Trump has come to deeply loath and consistently deride the chair of the Federal Reserve. While tensions between a president and the Fed are virtually inevitable, Trump has taken the clash to new extremes, and it is raising the possibility of a real crisis.

A warning sign about how bad things could get came from former New York Federal Reserve President Bill Dudley in a new column for Bloomberg.

Dudley floated the contentious idea that the Federal Reserve shouldn't "play along" with Trump's reckless trade war. Essentially, he's suggesting that the Fed's decision to cut interest rates in part to mitigate that harm done from Trump's tariffs was a mistake because it encourages Trump to continue with bad policy without suffering the negative effects.

This is a controversial view of monetary policy. Many argue that the Fed should simply stick to its mandate of keeping inflation and unemployment without passing judgment on political decisions. But the idea really does raise some vexing questions. What if the Federal Reserve really thinks that the long term policy pursued by the administration will drastically harm the economy down the road, and thus that short-term monetary policy boosts are actually counterproductive? Such thoughts present genuinely difficult puzzles that are not easy to sort out. (Though Vox's Matt Yglesias argues that this idea is almost always used to suppress Democrats' policies, so it's an argument progressive should be reluctant to make.)

But Dudley takes this line of argument much further than is reasonable in the final paragraph of his piece:

There’s even an argument that the election itself falls within the Fed’s purview. After all, Trump’s reelection arguably presents a threat to the U.S. and global economy, to the Fed’s independence and its ability to achieve its employment and inflation objectives. If the goal of monetary policy is to achieve the best long-term economic outcome, then Fed officials should consider how their decisions will affect the political outcome in 2020.

This is a truly provocative and even perilous view. Dudley is basically saying that the Fed could engineer — or at the very least, permit — a recession to hurt Trump's re-election efforts and raise the chances that the country will elect a better president who will pursue better economic policies.

It's exactly these kinds of views that feed the paranoia that Trump and his ilk thrive on, and it's important to realize that Dudley's view is incredibly marginal. It received immediate pushback, and there's basically zero chance that it will happen.

The Fed is not going to do what Dudley suggests for three clear reasons:

But while Dudley rightfully received pushback for his column, we must recognize the role Trump has played in getting us to this point.

Trump's attacks on the Fed's independence and on Powell personally have been bad enough. But calling Powell an "enemy" truly crosses a line, especially when it's already been seen that Trump can inspire his fans to carry out attempts at vigilante justice on his behalf.

The president is playing with fire. We shouldn't expect Powell to respond in kind — he is, by all appearances, keeping his head down and doing what he thinks the economic situation demands, regardless of the president's tweets. There's no reason think he'll neglect to use monetary policy to prevent or mitigate a recession if he can, and there's no reason to think he would tank the economy to keep Trump from re-election.

But Trump's own rhetoric can spiral upon itself, especially when someone like Dudley — who, once again, no longer works for the central bank — adds even the smallest amount of fuel to the fire. Trump was already prone to be suspicious of Powell no matter what happens; now, he has one more reason to accuse the chair of "treason."

So what happens if the country really does fall into recession, and Trump decides his own appointee is to blame? He may try to remove Powell, but it's unclear whether the president has the authority to do this. Powell himself has said that he does not believe Trump can fire him. Trump might be able to demote Powell — but the Federal Open Market Committee could decide to vote to make him its chair anyway, essentially nullifying such a move.

This power struggle may wind up in court, and the ongoing tensions and confusion would surely only roil the markets more. Trump, of course, would blame Powell for this chaos.

It's impossible to predict where all the chips would fall in such a scenario. But suffice it to say that Trump has placed the country on a potentially perilous path.