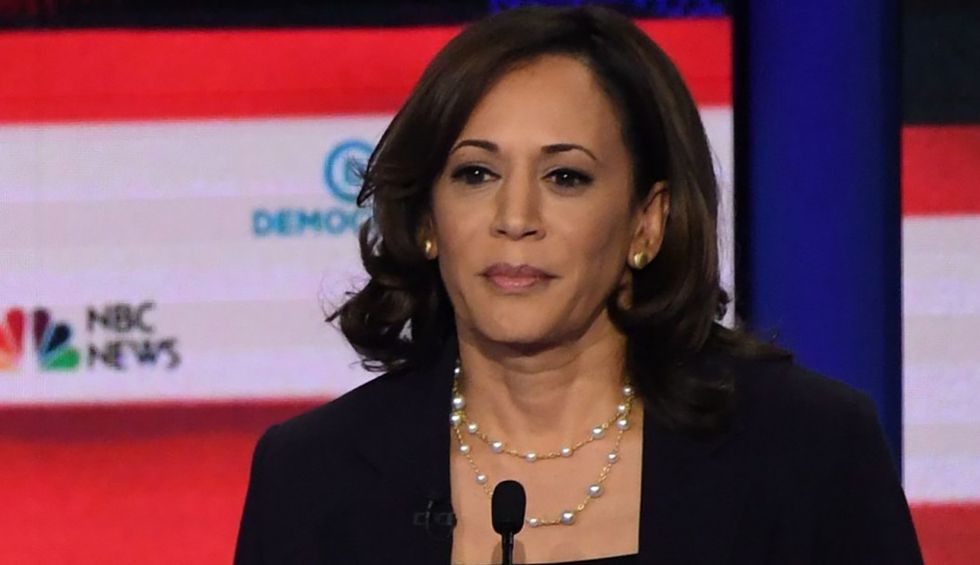 The 2020 presidential campaign has been notable for its focus on policy (Thanks, Senator Warren!), with candidates drawing distinctions through plans and proposals. But we should reserve at least some thought for the backgrounds of the advisers helping candidates construct the policies. Campaigns often turn to experts in various fields, as well as a network of policy advisers with whom they feel comfortable, and these are the people a victorious candidate usually hires for their cabinet, too.

“Voters really should want those questions asked and answered,” says Jeff Hauser. “Who is an adviser now would be who will be an executive adviser [to the president later].” Hauser, executive director of the Revolving Door Project, specializes in political corruption and has driven the idea that personnel, at least in the case of presidential campaigns, is policy.

For this week’s debates, the Prospect has compiled some background on the main policy influencers in the leading five candidates’ campaigns. Some of those mentioned are officially employed on the campaign, and some are outside advisers consulted on particular questions.

Here’s what you need to know:

Biden’s policy personnel—like much of his staff—have been with him for years if not decades. His policy director, Stef Feldman, has worked for him in various capacities since she started in the Office of the Vice President in 2011, according to her LinkedIn. Grace Landrieu is his deputy policy director. Before working for Biden, she attended Harvard’s Kennedy School of Government and worked for the Nevada State Democratic Party.

But among Biden’s other advisers, there’s some controversy. His climate adviser, Heather Zichal, earned a million dollars from a natural gas company, and she was the one who expressed that Biden intended to seek middle ground on climate. Not exactly what progressives like to hear.

Biden also recently unveiled a new health plan, which some have called largely a preservation and modest expansion of Obamacare. But he doesn’t seem to have a health policy director on staff. This is perhaps a bigger problem: Biden appears to be rolling out policy with a very lean group of policy advisers, perhaps outsourcing the development of the concepts. Even whether the lead advisers are inside or outside of the campaign is hard to pin down.

According to one source, the plan may have been influenced by Sarah Bianchi. According to her LinkedIn, she does not seem to have an official capacity on the campaign but is currently chair of the advisory board of the Biden Institute, the school of public policy and administration at the University of Delaware. While Bianchi does have health-care expertise dating back to work on the 2000 Gore campaign, her career also involves lots of corporate work. Bianchi was managing director at asset management firm BlackRock, an investor at the hedge fund Eton Park (where she invested in numerous health insurance companies during the Obamacare rollout), and worked in policy for Airbnb.

Like Bianchi and Zichal, Eton Park’s founder and former Goldman Sachs partner Eric Mindich is part of the cadre of advisers that Biden hired at the Biden Institute at the University of Delaware last spring. Others that make up this group of advisers are corporate names like Peter Scher of JPMorgan, Don Graves of Cleveland’s KeyBank, and former Treasury Secretary Larry Summers—briefly reviewed as a possible pick for Obama’s chair of the Federal Reserve after Ben Bernanke left. Graves also lists the position of adviser to former VP Biden and the Biden Institute on his LinkedIn.

Ben Harris seems to be Biden’s policy guy for budget. Now at Northwestern’s business school, Harris lists that he was the chief economist and economic adviser to the vice president.

The mayor of Indiana’s fourth-largest city has become a big hitter in the polls and among donors. And he’s hiring to prove it. His website lists dozens of open positions, and many policy-specific ones, including a climate and energy policy lead, an economic policy lead, an education policy lead, a policy writer, and a traveling policy lead.

While playing catch-up, the initial hires are revealing. Sonal Shah is a former Google and Goldman Sachs executive brought on as national policy director. This makes sense, given the reported direction Wall Street’s donors have turned. Shah was also former deputy assistant to the president under Obama and worked for the Clinton-era Treasury. Google had a famously close relationship with the Obama administration, and Shah was part of developing that. Hauser told Politico that the Shah hire was a “signal to the tech world that the Buttigieg administration would be a reboot of the Obama administration.”

Buttigieg also counts among his friends Silicon Valley funders such as Mark Zuckerberg’s roommate Joe Green, according to the Prospect. Jess O’Connell is also now a senior adviser to the Buttigieg campaign. She was previously the CEO at the DNC and worked for the Center for American Progress and Emily’s List.

For the senator, everything goes through her sister, Maya Harris. Senator Kamala Harris’s younger sister is her campaign chairwoman. She spent time at the Ford Foundation and the Center for American Progress, but most importantly, was one of three top policy advisers to Hillary Clinton’s 2016 presidential campaign, part of all of that campaign’s policy rollouts. And it shouldn’t be surprising that the Harris campaign shares numerous links to Clinton’s 2016 run.

On economics, BlackRock’s Michael Pyle is advising Harris. He served as an economic aide in the Obama administration before joining BlackRock, and was an outside economic adviser to the Clinton campaign. Harris’s deputy policy director is Corey Ciorciari. Ciorciari has worked for Democracy Forward and was also previously a policy adviser for Hillary Clinton. Others among her team include Drew Spence, her policy chief of staff. Spence has worked for the senator since 2012, previously as a legislative aide and at the California Department of Justice.

Instead of listing available positions on the campaign, clicking the jobs link opens an email addressed to resumes@kamalaharris.org.

Harris just announced her own Medicare for All plan, which was swiftly castigated by the Biden team and does seem oddly devoid of necessary specifics. But another Harris policy proposal, on black entrepreneurship, has been turned into a meme, which surely isn’t a good sign. Oddly specific Kamala Harris policy generator, anyone?

Sanders’s strength lies in his consistency. Most of his advisers have been with him in one form or another for decades, though there are a few new faces in 2020.

Warren Gunnels is Sanders’s senior policy adviser and has worked for the senator for more than 20 years. A graduate of Denison University in Ohio, Gunnels previously worked for Senator Tom Harkin, the Iowa senator best known for being the chief sponsor and author of the Americans with Disabilities Act. Also on Sanders’s team is 2016 holdover Stephanie Kelton, a specialist in monetary policy whose big ideas—that governments with fiat currencies cannot run out of moneyand deficits are only constrained by inflation, as well as a job guarantee program—have started to become more accepted in policy circles. Kelton advises Sanders on economics, and her ideas are clearly seen in his policy proposals.

One of Sanders’s most prominent policy minds is a rising star among progressives. Matt Duss, Sanders’s foreign policy adviser, told The Nation in a profile of him that he was from a family of refugees, and his values stem in part from his evangelical Christian background. He was formerly at the Foundation for Middle East Peace and also worked as a senior policy analyst for the Center for American Progress. He has also written about the Middle East for this magazine.

Heather Gautney is senior policy adviser to Sanders and is an associate professor at Fordham University and the author of the book Crashing the Party: From the Bernie Sanders Campaign to a Progressive Movement. Other advisers include senior adviser and policy director Josh Orton, a graduate of the University of Wisconsin, Madison, law school who previously worked for Senator Harry Reid and President Obama. Keane Bhatt, who has written for Jacobin and Truthout as well as had appearances on Democracy Now!, and Alex Jacquez, who previously worked in the Obama White House and for USDA Secretary Tom Vilsack, are also both policy advisers to Sanders.

Warren turns to intellectuals and academics for her policy positions. But as her policy director Jonathan Donenberg explained, her policies are ultimately all her own ideas—and that’s why she can explain each in a 30-second elevator pitch or a 10-minute policy speech. A Politico piece detailed many of the “Ivory Tower team of wonks” behind Warren’s policies, noting that many have Ivy League credentials and other elite accolades. Donenberg attended Yale Law and was a Fulbright scholar. Moreover, many have worked with Warren in the Senate, creating almost an in-house think tank for her policy vision.

Bharat Ramamurti is a key domestic policy adviser. He worked in Warren’s Senate office on banking and economic policy. Many Warren aides and advisers, like Representative Katie Porter of California, are former law school students, and have become a network of experts on which Warren has relied.

Warren also consults with the likes of Paul Krugman, a New York Times columnist and noted economist at CUNY, and Berkeley professors Emmanuel Saez and Gabriel Zucman, inequality experts who assisted Warren in developing her wealth tax. Ganesh Sitaraman, a Vanderbilt professor and another former Warren student, is not on the campaign payroll but is a longtime Warren adviser. Full disclosure: Sitaraman is a board member at the Prospect.

Sasha Baker is Warren’s policy adviser on national security and was formerly the deputy chief of staff for Obama’s secretary of defense, Ash Carter. Mehrsa Baradaran advised Warren’s campaign on its child-care proposal and is now a law professor at the University of California, Irvine. She also serves on the board of this magazine.