George W. Bush is a war criminal — and the media is still helping cover up his crimes 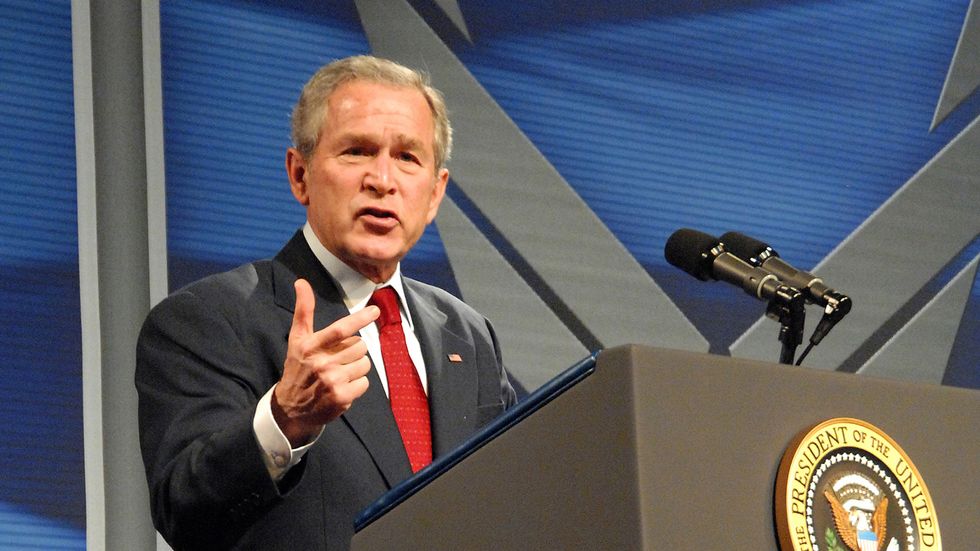 President George W. Bush discusses the war on terrorism with about 1,100 attendees at the National Museum of the U.S. Air Force March 27. The president landed at nearby Wright-Patterson Air Force Base, Ohio, and traveled to the museum, where he spoke for about 40 minutes. President Bush thanked Airmen for their role in the fight against terrorism and outlined the need for continued support to Iraq. (U.S. Air Force photo/Ben Strasser)
Common Dreams
August 16, 2019 Human Rights

I’ve got a stone in my shoe.

It’s been there for 18 painful years. I can’t seem to accommodate myself to it. Because every so often it grows another sharp edge. Those familiar with the "Americans Who Tell the Truth" portrait project know that the stone planted itself in my shoe shortly after 9/11 when the Bush administration launched the propaganda for attacking Iraq. This was a war crime. At Nuremberg after World War II we hung Nazis for similar crimes against humanity.

Instead of demanding accountability, our political, corporate, media and military powers keep working to make all that history of  lies disappear. They want to make the stone invisible, the hobble in our walk imaginary. That cover-up is another crime. I wouldn’t care so much except that this is not about George W. Bush being a dishonest human being. It’s about the millions of dead and traumatized, the landscape and economies destroyed, the weapons we used still causing terrible birth defects, the cultures destroyed—and all the profit made by the US war industry. The greater the chaos, the bigger the profit. The more invisible the stone, the more it hurts. Let me give you an example of how this works.

A few days ago I happened to see some photos on the CBS News morning show of ex-president George W. Bush holding his newly born grandson. A quick Google search showed all the networks sporting similar coverage. In the photos we see the young mother, Bush’s daughter Jenna, her two little girls, her newborn son Harold who will be called ‘Hal,’ and the exuberant grandfather, George W. Bush, president of the US from 2001 to 2009. In many of the photos is also Laura, passive wife of the former president.

I was enraged; but what sort of twisted curmudgeon flies into a rage upon seeing  photos of a happy grandfather, alongside his radiant daughter, holding his grandson? I guess that sort of curmudgeon would be me—for even though the photos were taken in a brightly lit hospital room, I saw only darkness. I saw propaganda. I saw the cynical re-writing of history and reputation. I saw fatuous news anchors smiling along with this granddad, celebrating the birth of a baby.

These folks love it when the rich and famous have babies. Pushes their saccharine pander button, I guess. Don’t we all love (read envy) this fortunate family! But it’s worse than that. This isn’t about corporate news actors fawning over celebrities.  I saw those news folks—this is the dark part—enabling the restitution of the granddad’s reputation the same way they had enabled his criminal war. Actually, they were purposely refurbishing his reputation because they had enabled his war. Right in front of our jovial, baby-happy eyes, we were watching history being erased. Because implicit in the happy birth chatter was the question: “How could anyone think this smiling guy cradling his little grandson could ever hurt anyone?”

I suspect some of you have heard of the great work of the  Innocence Project. Begun in 1992, the Innocence Project works to have wrongfully convicted people (there are lots of them) exonerated and to reform the legal system to prevent future injustices. What was taking place in this Texas hospital room, though,  was another kind of innocence project, not an idealistic but deeply cynical one, part of the political, corporate and media elite project to present W as a compassionate hero—a hero for our veterans, a hero for children.

I certainly wish Hal well, as I would any new inhabitant of  this planet—oak sapling, platypus baby, or human newborn. Some of you might  think my well wishes irrelevant. Hal is by birth a one percenter. ‘Privilege’ is his first, last and middle name. Nevertheless, I worry about him. At some point a rude person, a person who, unlike the news anchors, remembers history—a person like me, for instance—will inform Hal that his doting granddad lied shamelessly and persistently to instigate war. An imperialist war. An illegal and immoral war. This rude person will also inform Hal that such preemptive war is classified as a crime against humanity, that this war caused a cascade of events resulting in incalculable (and ongoing) suffering for millions of people—all while granddad and his cronies profited enormously.  Granddad should be in prison. That rude truth may be a bitter pill for Hal and precipitate a storm of questions, a storm violent enough to rattle the Bush family tree.

But back to the news anchors. Why do they seem so exuberantly happy? Are they members of the Bush family? In fact, yes, they are members of the family. In late 2001 and throughout 2002 they renounced their free press obligations in a democratic society. They refused to investigate the lies and propaganda of the Bush administration, and chose to trumpet the same fear and lies as the Bush team.  They crawled on their bellies begging adoption into family Bush. Adopt us and you can have your war.  We’ll reap profits, too.  And it came to pass.  Those media conglomerates owned by defense contractors profited twice.

The operational theme of the pathologically smiling news team is gee whiz innocence—a happy multi-generational, privileged family on the one hand and a cluster of very attractive 30 somethings being paid big network bucks to gush over the new grandfather on the other. It’s meant to appear as run of the mill, feel-good, celebrity news. An innocent antidote to the world’s ugliness, carefully omitting the cause of much of that ugliness.  Bush uses the cardboard corporate media to power wash his image. The media use the sweet, goofy grandfather to power wash theirs. A win-win. Meanwhile, a truly innocent little Hal lies swaddled in a huge lie.

I remember in 2001 when Bush, Cheney, Condi, Rumsfeld, Wolfowitz, and Powell, et al., trotted out their righteous fear and lies campaign to attack Iraq. It all seemed  so transparent to me, as though the mask of government probity had been yanked aside for anyone to see the deceit underneath, the ruthless willingness to choose war over dialogue, the ruthless appetite for indiscriminate murder for empire, profit and resource control. But the corporate press scurried to their rescue, made sure the mask never slipped. They paraded ex-general after goose stepping ex-general in front of their cameras to soberly underline Iraq’s imminent threat. Practically every one of those ex-generals was either a defense company executive or a defense contractor’s lobbyist. Or soon would be.

I wonder if some of those smiling anchors feel a moral twinge, carry a tiny burden  of their complicity in war promotion, the making of entire regions and populations collateral damage for US corporate interests. Dr. King liked to say the moral arc of the universe is long but it bends toward justice. What we see here is the purposeful bending of that arc in the opposite direction—twisted and knotted beyond recognition.

Bush is a war criminal, guilty of crimes against humanity, a serial killer. I have no trouble with him being delighted at the birth of his grandson, but if he really wanted to do something for his grandson and for this country, he’d admit his crimes. How likely is that? I’m afraid it may be left to teenage Hal to tally the children killed in Iraq, Afghanistan, Yemen, Syria, Libya, Somalia, etc.. Maybe Bush, in passing,  will even tell Hal how he censored his administration’s climate science to benefit the fossil fuel industry.

When we hear the survivors of mass shootings relate their trauma—their  terror as the racist and/or deranged executioner in the next aisle mows down shoppers and children, we try to  imagine the horror. We try, but we really can’t. The trauma belongs to the survivors.

But do we even try imagining the horror on a scale infinitely worse—the civilians of Iraq under "Shock and Awe" ordered by Bush and championed by vice president Dick Cheney and secretary of defense Donald Rumsfeld. Years of bombs, missiles, machine guns, torture, humiliation—on and on and on. About that horror we are not encouraged to imagine the trauma. We are encouraged to exult as conquerors. Or, at the worst, dismiss all that terror and blood as merely a policy mistake.

It’s a cliche to remark on the short attention span of citizens of the digital world. The assumption is that technology and information overload cause rapid memory saturation. Perhaps, though, the real reason for the reduced brain space is that  we’d rather not know. Yes, the politicians and the press lied. But, do we really want to carry the moral burden of crimes committed in our names? It’s OK to have some soldiers traumatized with PTSD, but not the entire country! We’d rather see "Dubya" as a good natured, harmless, innocent granddad and join his innocence project. It’s a lot easier on us. Real history is a tough business. But to erase it is to erase your own identity. That’s what Bush and all his enablers don’t seem to get. They’ve helped to create a culture with no will to name the crimes, and in the process made themselves nonentities. Financially rich, ethically worthless. Historical abominations. They are executioners with black masks pulled over their faces. We can see them, but they can’t see themselves. Because they can’t see themselves, they think their crimes are invisible, and that baby Hal will help shield them.

And about the stone in my shoe? I don’t expect relief any time soon.