Experts and lawmakers say time to call racist shooting what it was: 'Trump-inspired terrorism' 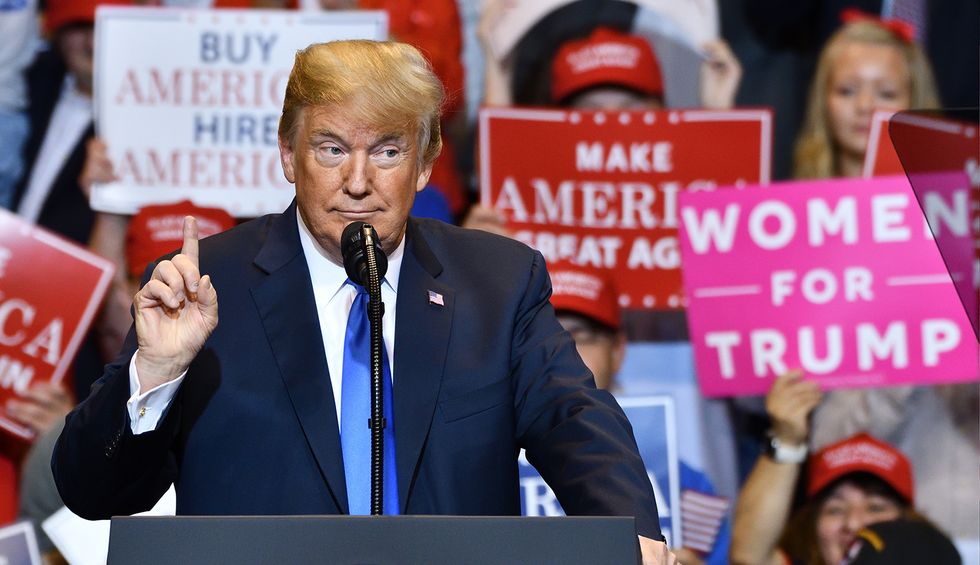 With President Donald Trump set to address the nation Monday following mass shootings in Texas and Ohio over the weekend, lawmakers, commentators, and experts said it is past time to dispense with euphemisms and call racist attacks like the massacre in El Paso what they are: "Trump-inspired terrorism."

"Trump has launched his 2020 re-election campaign this summer by doubling down on the theme of racial and ethnic division and anti-immigrant hysteria," David Schanzer, professor at the Sanford School of Policy at Duke University and director of the Triangle Center on Terrorism and Homeland Security, wrote in an op-ed for The Guardian on Monday.

Schanzer was alluding to the racist "send her back" chant at a Florida rally that Trump provoked with his xenophobic attacks on Rep. Ilhan Omar (D-Minn.)—a Somali refugee—and other women of color in Congress.

"And as sure as the sun rises in the east, a mere month into this racially charged atmosphere," wrote Schanzer, "an extremist suspect fearful of Hispanics gaining political power in Texas decided to go kill as many Hispanics as possible at an El Paso Walmart. It is Trump-inspired terrorism yet again."

Mehdi Hasan, a columnist for The Intercept, echoed Schanzer on Sunday, writing that "we can no longer ignore Trump's role in inspiring mass shootings."

"Thanks to his hate-filled rhetoric, his relentless incitement of violence, and his refusal to acknowledge the surge in white nationalist terrorism," wrote Hasan, "the president poses a clear and present danger to the people, and especially the minorities, of the United States."

Social media users also tied Trump to the attack in El Paso, and the Twitter hashtag #TrumpsTerrorists trended on Sunday.

Texas authorities believe the El Paso shooter, 21-year-old Patrick Crusius, is the author of a racist manifesto that stated the planned massacre was "a response to the Hispanic invasion of Texas."

Trump, as numerous commentators pointed out, has repeatedly likened immigration across the U.S.-Mexico border to an "invasion" and described asylum seekers as criminals in speeches and tweets.

"People hate the word invasion, but that's what it is," the president told reporters in March.

More terrorists have cited Donald Trump as an inspiration for attacks on the US homeland over the past three years… https://t.co/1Tgefe13Ih
— Samuel Sinyangwe (@Samuel Sinyangwe)1564865796.0

The Washington Post on Sunday offered just a small sampling of the racist language Trump has deployed in recent months to gin up his supporters and channel dangerous hatred toward immigrants, religious minorities, and people of color:

President Trump has relentlessly used his bully pulpit to decry Latino migration as "an invasion of our country." He has demonized undocumented immigrants as "thugs" and "animals." He has defended the detention of migrant children, hundreds of whom have been held in squalor. And he has warned that without a wall to prevent people from crossing the border from Mexico, America would no longer be America.

"How do you stop these people? You can't," Trump lamented at a May rally in Panama City Beach, Fla. Someone in the crowd yelled back one idea: "Shoot them." The audience of thousands cheered and Trump smiled. Shrugging off the suggestion, he quipped, "Only in the Panhandle can you get away with that statement."

Beto O'Rourke, a 2020 contender who represented El Paso in Congress, ripped the media on Sunday for not doing enough to link Trump's language to white supremacist violence.

"What do you think? You know the shit he's been saying," O'Rourke told a reporter who asked what Trump could do to confront racist violence.

"He's been calling Mexican immigrants rapists and criminals," said O'Rourke. "I don't know, like, members of the press, what the fuck? Hold on a second. You know, I—it's these questions that you know the answers to. "I mean, connect the dots about what he's doing in this country. He's not tolerating racism, he's promoting racism."

Tim O'Brien, executive editor of Bloomberg Opinion, similarly hit the media for its systematic failure to tie the president's rhetoric to massacres like the shooting in El Paso on Saturday.

"I think the media has soft-pedaled Trump and the GOP's racism," O'Brien told the Washington Post. "Trump has opened the door to tragedies like this and I think we can expect more. Nobody in the GOP has the political courage to come out strongly against him—and, in fact, many are happy to be complicit."

Trump, meanwhile, showed no sign of straying from his typical course following the mass shootings in El Paso and Dayton, Ohio, which left 29 people dead.

In a series of tweets Monday morning, the president blamed "fake news" for stirring up hatred and called for "immigration reform" to be tied to background check legislation.

The Media has a big responsibility to life and safety in our Country. Fake News has contributed greatly to the ange… https://t.co/0qoxJBDezb
— Donald J. Trump (@Donald J. Trump)1565004774.0

The racist massacre in El Paso did not come out of the blue. Kenneth Roth, executive director of Human Rights Watch, pointed to a "prescient" New York Times op-ed by former FBI counterintelligence specialist Frank Figliuzzi, who warned that the U.S. is "headed for trouble in the form of white hate violence stoked by a racially divisive president."

"It doesn't really matter whether Mr. Trump is truly a racist or merely playing one on television to appeal to his base," wrote Figliuzzi. "Either way, his path can lead to bloodshed. When that happens, we will hear White House officials and the Republican leadership claim their hands are clean because malicious people can’t be stopped from acting out."

Schanzer warned in his Guardian op-ed Monday that if the president is not stopped, massacres like El Paso could become more frequent as Trump ramps up his xenophobic rhetoric in his bid for reelection.

"We remain 15 months from the 2020 election," wrote Schanzer. "It is staggering to imagine how much more violence this president may motivate if he continues down this deeply disturbing path."