Exclusive: Why Joe Walsh is the perfect wingnut to primary Trump (for Democrats) 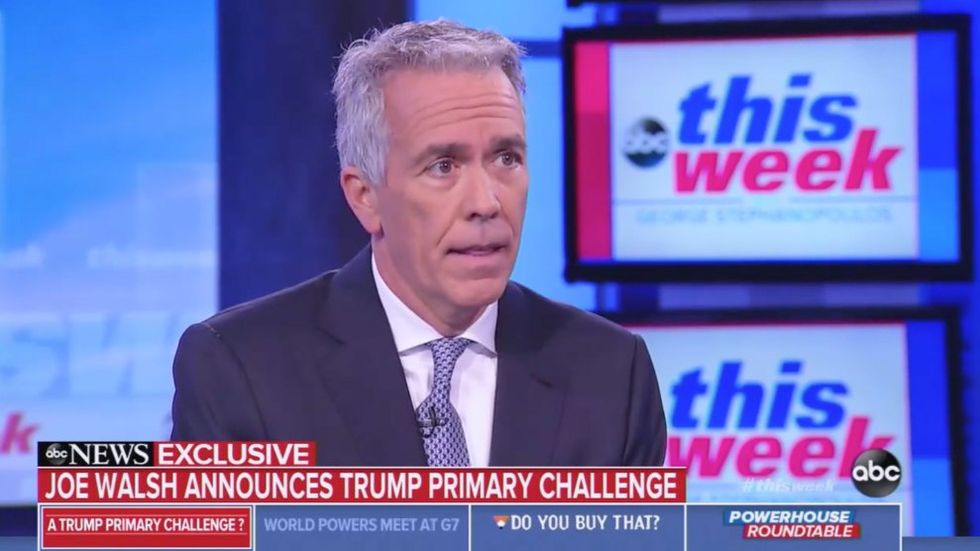 Former Rep. Joe Walsh's primary challenge against Donald Trump has been greeted by many Democrats and progressives with skepticism and a lot of reminders of what a toxic, bigoted and extreme right-winger Walsh has always been.  They should be embracing his run with open arms, and perhaps even supporting his campaign. Doing so could prove to be a strategic investment that brings a handsome return.

In all likelihood, Walsh will only pull a few percent of the popular vote and win no delegates. But votes and delegates don't matter.  The process of someone like Walsh hitting Trump from his right flank during the primary season, wheh Democrats are otherwise occupied with their own race, has the potential to weaken Trump with the GOP base and Republican-leaning independents and yield dividends in the general election.

Since World War II ended, only one sitting president (Richard Nixon in 1972) has overcome a primary challenge (by someone who wasn't an obscure kook) to win re-election.

Primary challenges expose a weak incumbent's vulnerabilities and force him to litigate his party's internal conflicts. A Monmouth poll conducted in February found that 43 percent of Republicans wanted Trump to face a challenger from within his own party;  A University of New Hampshire survey found from around the same time found that only 56 percent of likely GOP primary voters in the Granite State say they  definitely plan to back Trump in the primary.

Walsh can attack Trump from his right in ways that Democrats cannot. He can argue that Trump's presidency has been a failure because he was unable to repeal Obamacare, build a wall on the Mexican border or significantly decrease immigration flows. He can hit him for the explosion of spending and debt that's occurred on his watch.

More importantly, those arguments have a chance of being heard by his co-partisans. Because of negative partisanship and media siloing, even the best lines of attack Democrats can offer often fall on deaf ears within the Republican coalition, even if they're perfectly accurate. Toward that end, Walsh's belligerence and the fact that he doesn't have a moderate bone in his body makes him an ideal messenger to take those arguments to Trump. While former Massachusetts Governor William Weld and 2016 candidate John  Kasich might make arguments that appeal to the college-educated white suburbanites who have been moving toward the Dems in the past three years, Trump can easily dismiss them as squishy RINOS who are out of touch with the party's base.

And Walsh, who promises to run a "TV-centric" campaign, will surely get under Trump's skin. Any other incumbent with the overwhelming support of his base would stay above the fray and leave the primary fight up to surrogates, but Trump's narcissism and feral instincts will force him to lash out and keep Walsh's attacks in the news. Instead of focusing all of his energy attacking the Democrats while they navigate their own primaries, he'll end up firing off childish taunts at people on both his left and his right rather than fighting on only one flank.

It's unlikely that primary challenges by Walsh and other Republicans will have a major impact on the race, but they don't have to. In 2016, Donald Trump won the Electoral College thanks to 80,000 votes cast in three states. If Nevertrump Republicans can bring down GOP turnout by a percentage point or two, and perhaps swing a handful of votes out of their column, it could make the difference in the contest or help decide a close Senate race or two. The possibility alone makes it a worthwhile effort.