Exclusive: Bernie Sanders has a transformative-but-not-at-all-radical plan to roll back 50 years of rising inequality 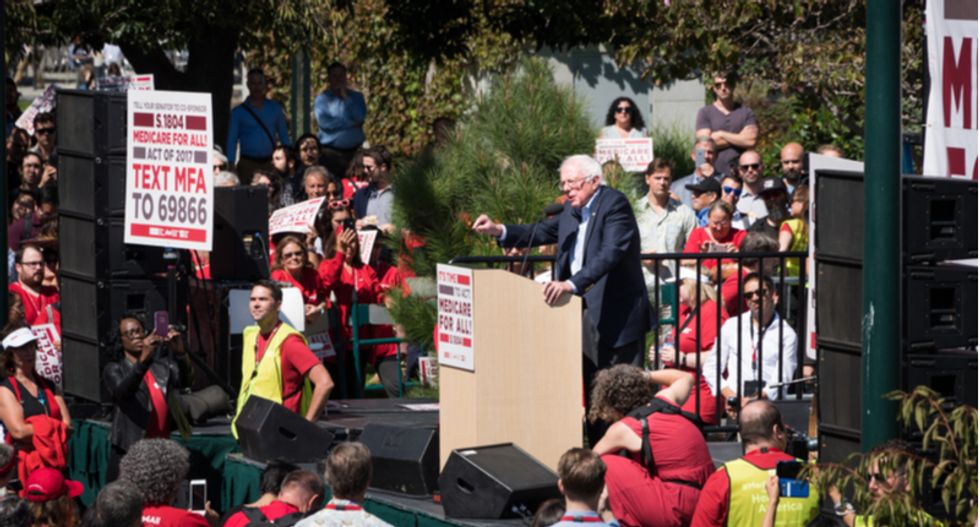 Last week, Sen. Bernie Sanders unveiled his "Workplace Democracy Plan," an ambitious proposal to bring U.S. labor law in line with that of the rest of the industrialized world. It has the potential to roll back 50 years of growth in income inequality. It is, in the American context, a radical plan. But it is important to understand that the United States currently gives employers power over their workers that would be shocking to the citizens of most wealthy countries. That imbalance is radical, and it is directly tied to American workers facing the second highest level of income inequality, after Mexico, among the countries in the Organization for Economic Cooperation and Development (OECD), and arguably the most economic insecurity in the world's wealthiest economies.

You probably know about the relationship between the health of labor and the American economy sharing its gains. In broad strokes, in the years after World War II, almost four in 10 workers belonged to a union and for the next few decades wages rose side-by-side with productivity growth and a middle class emerged, at least among whites.

The war on organized labor, which began in earnest during the 1970s but really accelerated under Reagan, broke that relationship, as this chart via Brookings shows.

And there's a really strong correlation between that trend and the rise in income inequality (via economist Steve Maas) ...

Sanders is proposing some bold remedies for this and other serious problems American workers have faced for so long that they've come to be seen by many as just the way the world works.

First, he would do away with at-will employment. As Americans, we take for granted the idea that we can lose our jobs for any reason, or no reason at all (as long as it can't be proven that we were sacked due to discrimination based on race, gender or religion). But there is no other country in the world where employers enjoy such tyrannical power over their workers' lives. It's unheard of.

It also defies economic logic; a company's value derives from its employees' contributions just as much as solid management. Under Sanders' plan, you could be fired for "just cause" if you're not pulling your weight but if you're contributing to a successful company's prosperity you know that you'll keep your job regardless of your boss's disposition.

“Just cause” empowers workers to have a voice. It gives them the power to say, “No.” “No” to requests that fall outside of a job description, to unwanted sexual advances or jokes, to an employer’s demand that the worker lobby the government on its behalf. It gives workers the right to engage in free speech outside the workplace, to flip off the president, to attend a protest, and to engage in all manner of non-work-related speech, without risking their jobs.

It also makes it harder to fire workers for union organizing. (At present, that's illegal but can be difficult to prove if a company plays it carefully.)

But the provision in Sanders' proposal that might have the greatest impact on wage inequality is his call for what's known as "sectoral bargaining." Instead of workers fighting to negotiate contracts with individual employers, wage boards made up of management, union representatives and possibly other stakeholders would set a floor for wages and benefits across entire industries. Unions could then negotiate with individual employers for a better deal above that floor.

Again, this may seem radical at first blush, but as The European Central Bank noted in a policy brief, "in Austria, Belgium, Denmark, Germany, France, Greece, Italy, Japan, the Netherlands, Norway, Portugal, Slovenia, Spain and Sweden the sectoral level is the dominant one for wage bargaining." Sectoral bargaining was supposed to be part of The New Deal when it was introduced in FDR's National Industrial Recovery Act of 1933 but it was struck down by that era's arch-conservative Supreme Court.

France is known for its feisty labor movement and has low levels of income inequality relative to other wealthy countries, but its unionization rate, at 8 percent, is lower than that of the U.S. (10.5 percent). And that's because French unions represent the interests of all workers in their industries, whether or not they belong to a union.

The French model is also instructive because despite having that very low rate of union membership, when French labor strikes it really strikes. That's not so in the United States, which puts onerous restrictions on the right to strike. In fact, in most of the democratic world, courts have interpreted freedom of expression and freedom association to give workers an affirmative right to strike, meaning that restrictions on such actions must be justified by a compelling public interest--like limiting the ability of first responders to walk off the job because chaos might ensue.

Sanders' plan would again bring the US in line with other democracies in this regard. He would repeal a 1947 law that makes it illegal for workers to strike in solidarity with others, and give public sector workers a right to strike in the first place.

In 2007 and 2008, unions were counting on Democrats to pass The Employee Free Choice Act, which centered around a provision making it easier to unionize if a majority of a company's workers filled out cards saying they wanted to bargain collectively. Their hopes were dashed.

Twelve years, one crippling recession and yet more increases in inequality later, that kind of moderate approach is no longer sufficient. And just as he has done with healthcare, Sanders is again pushing the entire discussion about workers' rights within the Democratic coalition to the left. Whatever you think of the candidate or his campaign, he deserves a lot of credit for that.

"The Workplace Democracy Plan" has a number of other worthy provisions, which you can check out here.