Embattled Rep. Steve King jokes about imprisoned Muslims who were forced to eat pork in China 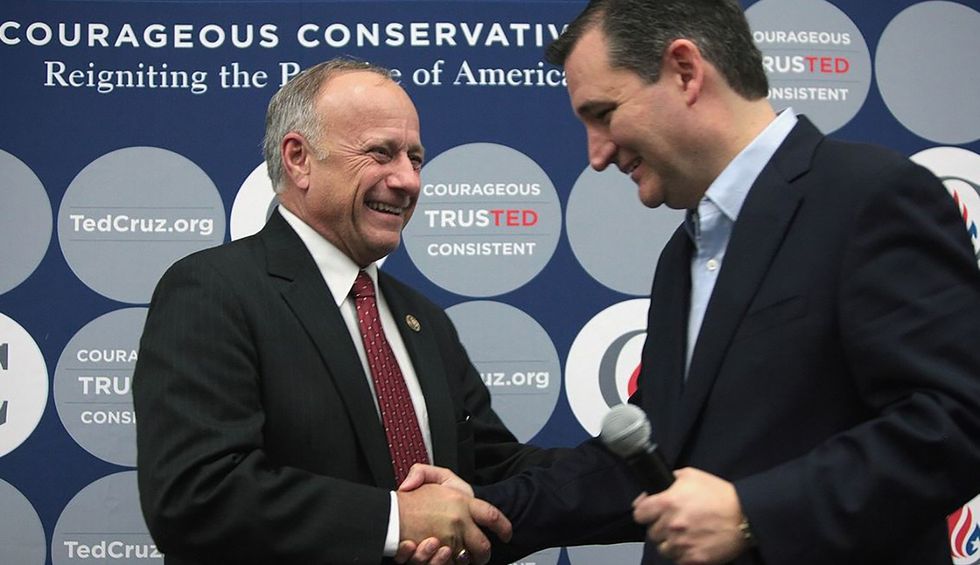 Rep. Steve King, R-Iowa, who has been largely abandoned by Republicans in Congress following his seemingly endless series of racist and offensive remarks, added more insult to injury Tuesday after he appeared to endorse efforts to force-feed pork to Muslims.

During a town hall event in his home state, King appeared to make light of the alleged abuses of Muslims in China, who have been rounded up by the government and held in what resembles a "massive internment camp that is shrouded in secrecy," according to the U.N. The Chinese government is believed to be cracking down on Uighurs and other Muslims minorities in the nation.

Speaking about China's latest effort to implement a social credit system, King discussed how the Asian country treats Muslims. He noted how the nation's government had put Muslims in camps, forcing women to undergo forced sterilization and taking their children away. Then, he appeared to joke about how the government had forced Muslims to eat pork, which is strictly forbidden in the Islamic religion.

"They want them to put on Chinese clothing and eat Chinese diet, which includes trying to force the Muslims to eat pork," King said. "That’s actually the only part of that that I agree with. Everybody ought to eat pork. If you have a shortage of bacon, you can’t be happy."

In recent weeks, King has come under mounting scrutiny for questioning whether there would be any population if not for rape or incest. He made the remarks as he explained his opposition for exceptions for rape and incest in anti-abortion legislation.

"What if we went back through all the family trees and just pulled those people out that were products of rape or incest?" King asked. "Would there be any population of the world left if we did that?"

"Considering all the wars and all the rapes and pillages that's taken place, and whatever happened to culture after society, I know that I can't certify that I'm not a product of that," he added. "And I'd like to think every one of the lives of us are as precious as any other life."

The congressman's remarks were widely condemned, even from within his own party. Amid the controversies, King is reportedly struggling to attract donors and has been largely abandoned by Republicans in Congress in the wake of his latest bout of controversy.

The GOP's decision to leave King high and dry is notable, although not unexpected. The lawmaker has a long and documented history of making racist and offensive remarks. He lost nearly any clout he still had within his party earlier this year after he asked why the terms "white supremacy" and "white nationalism" were considered offensive.

As he gears up for his most challenging path to re-election, King has not received a single donation from political action committees (PACs) associated with his colleagues in Congress, or from corporate PACs or interest groups. During the first six months of the year, King received only two contributions from third-party political entities: $2,000 from PACs associated with former GOP Reps. Lamar Smith of Texas and Todd Akin of Missouri.

King will be the most vulnerable he has ever been in 2020. Next year, he will again face off against J.D. Scholten, the Democrat who came within 3 points of unseating him last cycle. Iowa State Sen. Randy Feenstra is seeking to force King out of the GOP primary. Feenstra's campaign reported having $337,314 cash on hand in June, while King reported just $18,365.