El Paso to meet Trump visit with protests against hate: 'Your rhetoric and your actions led us to this terrible moment' 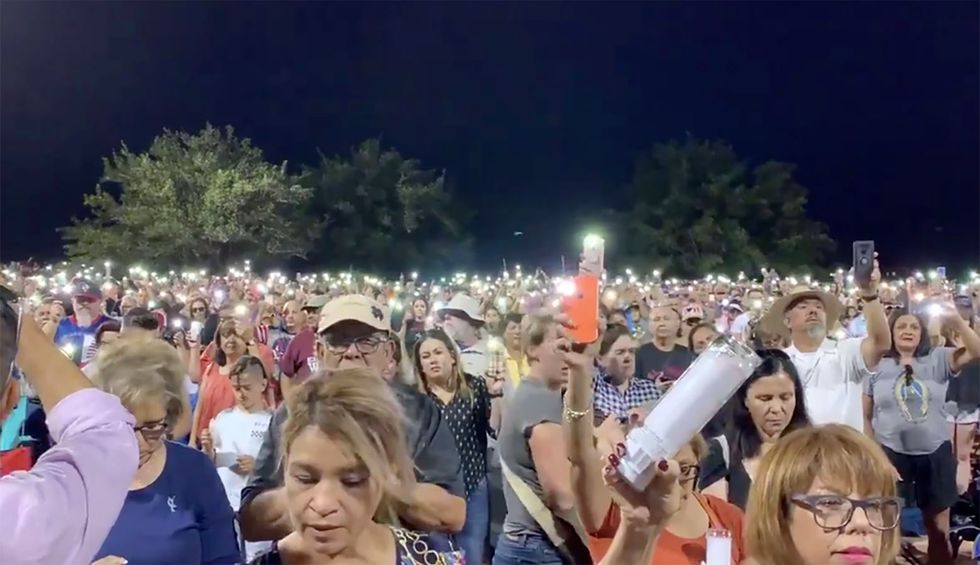 With President Donald Trump set to visit El Paso, Texas on Wednesday—just days after a gunman who echoed the president's anti-immigrant rhetoric massacred 22 people—city residents and lawmakers are planning to protest the trip with a simple message: hate is not welcome.

"We do not need anybody fanning the flames of hate, anger, and racism," activist David Nevarez told the Washington Post Tuesday. "There's enough in this world already."

A coalition of community organizations, including Border Network for Human Rights and Women's March El Paso, organized a demonstration in the city to coincide with Trump's visit, which was scheduled in the face of strong objections from grieving residents and local officials.

"El Paso was targeted for the horrific shooting because we are a welcoming city that advocates for immigrant families," reads the Facebook page for one protest, which hundreds are expected to attend. "We were targeted for fighting against the dehumanization of our immigrant brothers and sisters, for pushing back against the criminalization of our border, and for denouncing President Trump's attempts to paint our communities as something they're not."

"President Trump is not welcome in El Paso," the event page continued, "and his narrative around immigrants and Central Americans should not be welcome anywhere."

As Vox's Aaron Rupar reported Tuesday, Trump riled up a rally crowd with dehumanizing rhetoric against undocumented immigrants during his previous visit to El Paso in February.

As Rupar wrote, "The footage is chilling to watch six months later in light of what happened last Saturday."

Rep. Veronica Escobar (D-Texas), who represents El Paso in the House of Representatives, echoed the sentiments of immigrant rights groups, telling MSNBC on Tuesday that Trump "is not welcome" in El Paso.

"From my perspective, he is not welcome here. He should not come here while we are in mourning," said Escobar. "I would encourage the president's staff members to have him do a little self-reflection. I would encourage them to show him his own words and his actions at the rallies."

In a series of tweets Tuesday evening, Escobar said she attempted to schedule a phone conversation with the president about his anti-immigrant rhetoric but was told Trump was "too busy" to talk.

Escobar also said she declined an invitation from the White House to join Trump's visit to El Paso, instead opting to rally with "fellow El Pasoans who are dealing with the pain and horror left in the wake of this act of domestic terrorism fueled by hate and racism."

"I declined the invitation because I refuse to be an accessory to his visit," tweeted Escobar. "I refuse to join without a dialogue about the pain his racist and hateful words & actions have caused our community and country."

The Border Network for Human Rights, an El Paso-based humanitarian organization, sent a letter to Trump urging him to respect the wishes of the people of El Paso and city officials by canceling his trip.

"We, the undersigned, organizations and individuals who make El Paso and Southern New Mexico our home, and our friends and allies across this great land, send you this letter in the hope that, in the aftermath of this heinous crime, you will NOT come to El Paso, our home," the letter reads.

"We say this because we recognize that it is your rhetoric and your actions that led us to this terrible moment," the letter continues. "This shooter was inspired by your words and your attitudes. Your portrayal of asylum seekers as an 'invasion,' of Mexicans as 'rapists and criminals,' of unauthorized immigrants as 'animals,' your constant reliance on sowing hatred and fear, your embrace of racism and white supremacy, all of this over these past years has brought us to this place of pain."