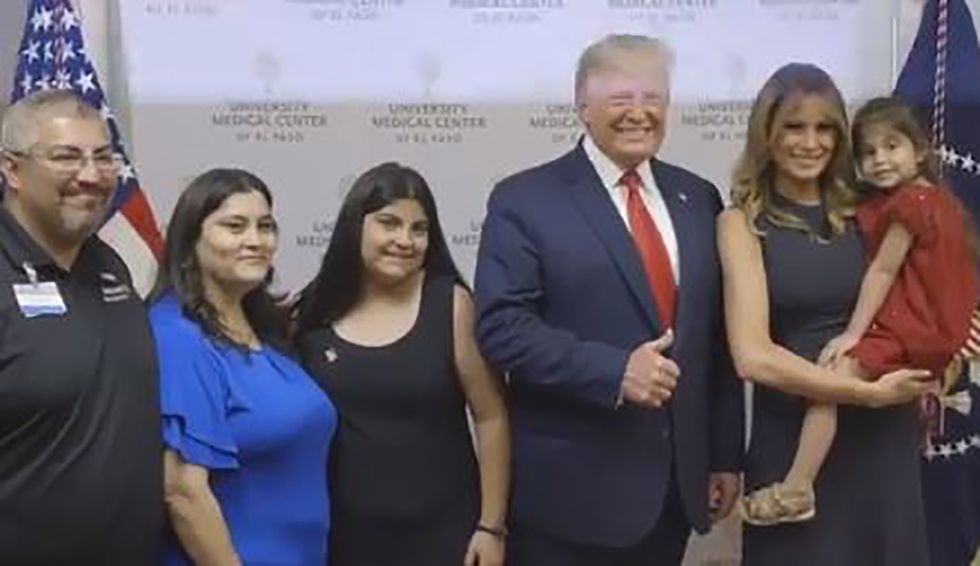 White House Press Secretary Stephanie Grisham told reporters it wasn’t a “photo op” on Wednesday. Reporters, understandably, were blocked from touring inside the hospitals with President Donald Trump on his trip to Dayton, Ohio, and El Paso, Texas, after two mass shootings – including at least one an act of domestic terror – that have shaken the nation. Yet the White House pushed out photos of the President and First Lady inside both hospitals.

The White House also rushed a pure propaganda video of the visit inside the University Medical Center in El Paso, which the President posted to Twitter less than two hours after his visit that was supposed to be with victims of and first responders to the El Paso white supremacist domestic terror massacre.

The highly-edited video includes a track of music, with the only voice audible is President Trump’s, and at the end, one woman saying, “God bless you, President,” and later, applause for the President. At one point President Trump pats the back of one man, and that sound is amplified. It’s made to appear as if he met with patients who were victims of the shooting, showing him clearly standing outside the Intensive Care Unit, but The Washington Post makes clear what actually happened.

“None of the eight patients still being treated at University Medical Center in El Paso agreed to meet with Trump when he visited the hospital, UMC spokesman Ryan Mielke said. Two victims who already had been discharged returned to the hospital with family members to meet with the president,” The Post reports.

The Post notes, however, that before President Trump’s visit, “some of the hospitalized victims accepted visits from a number of city and county elected officials, as well as Reps. Veronica Escobar (D-Tex.) and Jesús ‘Chuy’ García (D-Ill.).”

White House press secretary Stephanie Grisham said the president and first lady Melania Trump met with “victims of the tragedy while at the hospital” and were “received very warmly by not just victims and their families, but by the many members of medical staff who lined the hallways to meet them. It was a moving visit for all involved.”

Here’s the video posted to President Trump’s Twitter account at 9:43 PM, less than two hours after Air Force One was wheels up with the President headed to D.C.