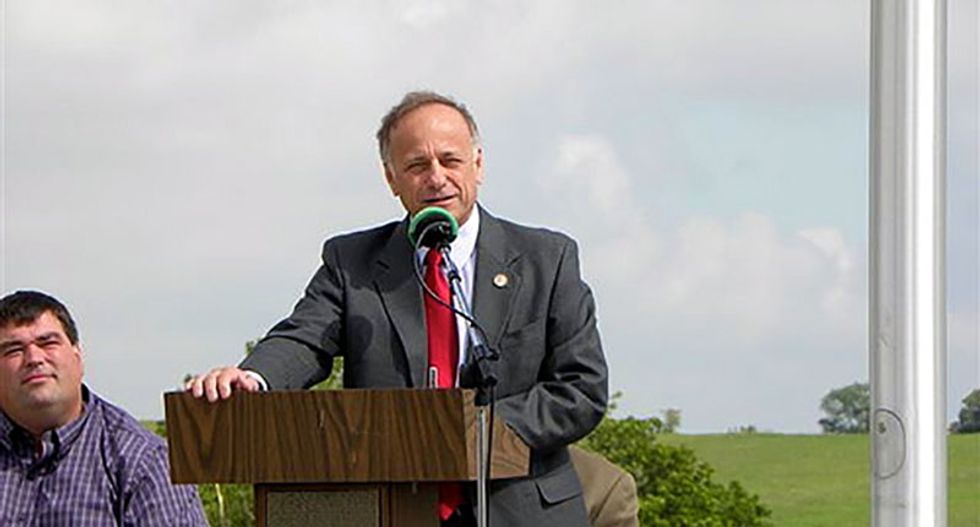 Rep. Steve King’s racism and sexism are so extreme that these days, even hard-right Republicans like Liz Cheney (daughter of former Vice President Dick Cheney) and House Minority Leader Kevin McCarthy are calling him out. The Iowa congressman has said that the term “white nationalist” should not be considered offensive, and he recently cited rape and incest as two ways to prevent low birth rates. But journalist Zak Cheney-Rice, in an article published in New York Magazine this week, argues that GOP attacks on King are merely a smokescreen — and that no matter how many Republicans decide to throw King under the bus, racism and bigotry are alive and well in the GOP.

Although King was first elected to the U.S. House of Representatives in 2002 and has been reelected many times since then, Cheney-Rice notes that he will be fighting a tough battle for reelection in 2020. King, Cheney-Rice points out, has received a “daunting” GOP primary challenge from fellow Republican Randy Feenstra — and if he wins the primary, King will face Democrat J.D. Scholten in the general election (in 2018, King defeated Scholten by only 3%). Moreover, Cheney-Rice writes, GOP donors are abandoning King. But Americans, Cheney-Rice stresses, shouldn’t be fooled by King-has-to-go rhetoric coming from Republicans, as there are many others in the GOP who are quite happy to promote racism.

Cheney-Rice cites Rep. Mo Brooks of Alabama as an example, noting that in 2014, the congressman accused Democrats of promoting a “war on whites” and described that “war” as “part of the strategy that Barack Obama implemented in 2008.” More recently, Cheney-Rice adds, Brooks has pointed to Rep. Rashida Tlaib and Rep. Ilhan Omar as examples of “the growing influence of the Islamic religion in the Democratic Party ranks.”

“Today’s GOP is marked by sycophants for a president who sought to ban Muslim immigration, who praises white supremacists, and who derides black countries and cities as shitholes and sites of infestation,” Cheney-Rice explains. “It features representatives like Matt Gaetz, who promoted the anti-Semitic conspiracy theory that George Soros was funding a migrant caravan full of criminals — a theory that later formed the basis for Robert Bowers’ massacre of 11 Jews at a Pittsburgh synagogue.”

Anti-Latino bigotry, Cheney-Rice points out, is another prominent feature of the GOP in 2019.

In the past, members of the Bush family made a concerted effort to court Latino voters. Former Florida Gov. Jeb Bush, whose wife is Mexican, is a fluent Spanish speaker who has been interviewed in Spanish more than once on the Univision network; his older brother, former President George W. Bush, viewed Latinos as a crucial part of the GOP’s future when he was governor of Texas in the 1990s.

But when Barack Obama was president, Cheney-Rice recalls, many Republicans turned against people with Hispanic names — and “Latinos quickly went from being a coveted voting demographic to being symbolic of all the ways America had gone downhill under Obama.”

Cheney-Rice concludes his New York Magazine piece by emphasizing that King is merely the tip of the iceberg when it comes to racism in the Republican Party of 2019.

“Even as the Iowa congressman inches closer to defeat,” Cheney-Rice warns, “there’s little evidence to suggest that a post-King GOP will look much different than it does today.”