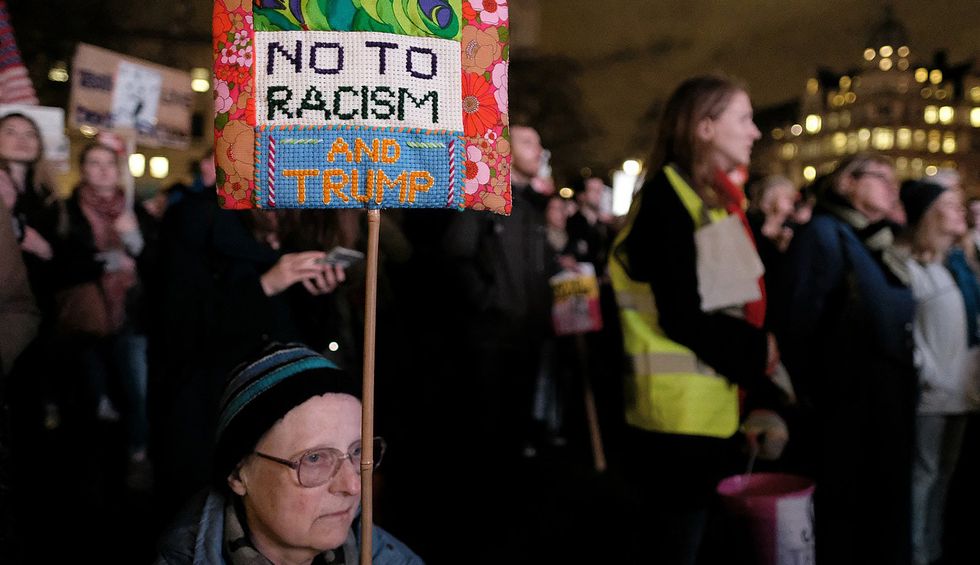 Donald Trump is not happy that people are noticing he’s a flaming racist and saying so out loud. “For them to throw out the race word again—racist, racist, racist,” Trump said Friday. “They call anybody a racist when they run out of cards.” As ridiculous as the notion that anyone has “run out of cards” against Trump is, it’s still more ridiculous to suggest that anyone would need to “run out of cards” to see that Trump is racist. He’s not even just a racist of political convenience, though he makes lavish use of racism to appeal to his base.

Trump’s career in public racism started way back in the 1970s, when he and his father Fred were sued by the Justice Department for racial discrimination in their real estate business. It stretches through his public campaign against the Central Park Five and continues with his refusal to acknowledge that they’ve been exonerated. It entered partisan politics with his birtherism. And through his presidential campaign and in office, he has turned again and again to racism to set policy and appeal to his supporters, from his anti-immigrant rhetoric to “shithole” countries to “rat and rodent infested” Baltimore to telling four congresswomen, three of them U.S.-born and the fourth a citizen longer than his own wife, to “go back” to the “totally broken and crime infested places from which they came.”

ut he wants to have his cake and eat it too, racism-wise. Trying to be less racist is not on the table, but, as former White House communications director Anthony Scaramucci puts it, “White supremacist. Racist. Those labels are bad for business. . . . It means a reduction in the colors of people who want to vote for you. He’s upset about it because it’s bad for business.” It is, The Washington Post reports, “a branding crisis.”

Well done here by the Post in calling it like it is to the extent of writing, “Throughout his career as a real estate magnate, a celebrity provocateur and a politician, Trump has recoiled from being called the r-word, even though some of his actions and words have been plainly racist.” Not all of their competitors—looking at you, New York Times—would be so bluntly truthful.

”One former adviser, who spoke on the condition of anonymity to avoid angering the president,” reports the Post, “suggested Trump believes he is more racially tolerant than his father, Fred Trump, who was reported to have been arrested in connection with a 1927 Ku Klux Klan march in New York—an arrest the president has denied as ‘nonsense’ and said ‘never happened.’” So Trump’s claim to nonracism is that he is less racist than the guy who was probably arrested at a KKK march. Great credential there!

According to Kellyanne Conway, Trump feels “less frustration and more consternation that critics, especially those who would like to be president, resort to spewing invectives or hurling insults at the current president, instead of just arguing on the issues.” But that is framing “racist” as a personal insult rather than a term with real meaning. Talking about racism is arguing on the issues. Trump’s argument on the issues is that people of color are definitely not American and probably not fully human. That’s racist. Full stop.

And as for his supporters, well, all too many of them embrace that racist set of positions, while the ones who are just here for the economic anxiety have decided that the racism is not a dealbreaker.