Donald Trump and Bernie Sanders love railing against Amazon — and shopping at Amazon as well: report 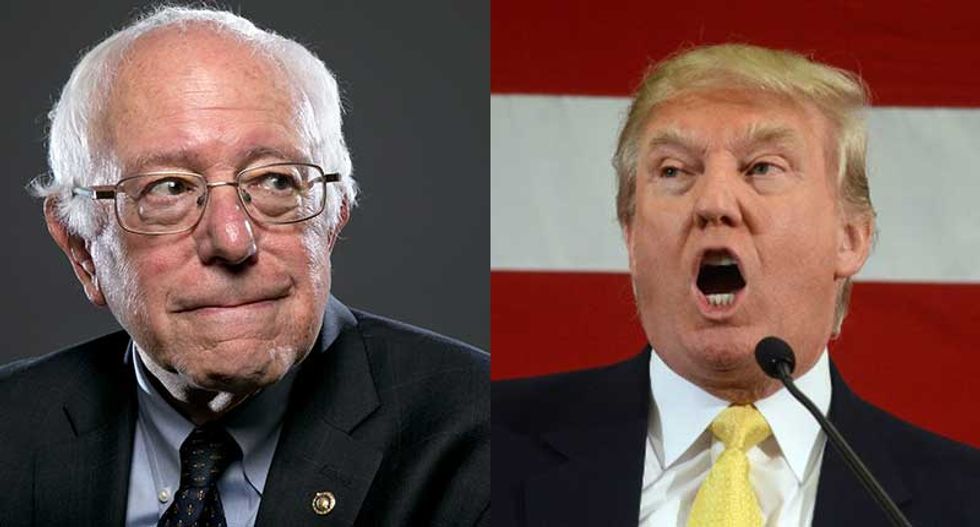 Many Americans have a love/hate relationship with Amazon, criticizing some of the e-commerce giant’s business practices and labor exploitation while continuing to shop at Amazon frequently. That includes politicians. And according to a report by Dave Levinthal and Chris Zubak-Skees for the Center for Public Integrity, two of the politicians who are both frequent critics of Amazon and major customers of Amazon include President Donald Trump and Sen. Bernie Sanders.

Sanders, the report notes, has accused the Washington Post (which Amazon CEO Jeff Bezos owns) of giving him unfair coverage and has often cited Amazon as an example of a huge mega-corporation that doesn’t pay nearly enough in taxes. The Vermont senator and 2020 Democratic presidential primary candidate has complained that many Amazon employees are woefully underpaid considering how wealthy Bezos is.

But since March, according to the records of the Federal Election Commission (FEC), Sanders’ “campaign committee has spent more than $139,000 on Amazon products and services, including office and event supplies, software and transportation,” Levinthal and Zubak-Skees report.

Their report also observes that “since March, about 2400 employees of Amazon and subsidiaries such as Whole Foods have together given more than $100,000 to Sanders’ campaign, mostly in small amounts.”

Trump has railed against Amazon on Twitter more than once. On August 2, 2018, for example, Trump simultaneously based the U.S. Postal Service and Amazon, tweeting, “Only fools, or worse, are saying that our money losing Post Office makes money with Amazon. THEY LOSE A FORTUNE, and this will be changed.” And in another tweet, Trump complained, “I am right about Amazon costing the United States Post Office massive amounts of money for being their delivery boy.”

But Trump, for all his attacks on Bezos, Amazon and the Washington Post, has given Amazon plenty of business. According to Levinthal and Zubak-Skees’ report, FEC records show that Trump’s reelection campaign has “spent more than $45,000 on Amazon office supplies” since January 2017 (when it officially filed reelection paperwork).

Listen to how Amazon uses its own lingo to blur the distinction between billionaire CEO Jeff Bezos and the average… https://t.co/P46inI5VaA
— Bernie Sanders (@Bernie Sanders) 1536593340.0

Another 2020 presidential candidate who has been a major Amazon customer, according to the report, is Sen. Elizabeth Warren — whose presidential campaign has “spent about $81,000 through Amazon,” Levinthal and Zubak-Skees note.

The Center for Public Integrity asked both Trump and Sanders’ 2020 presidential campaigns to comment on their Amazon shopping habits. Trump’s campaign didn’t respond, but Sanders’ campaign manager, Faiz Shakir, did e-mail the Center a statement: “Sen. Sanders has not flinched in taking on Amazon and other large corporate monopolies, and he will continue to take them on when he’s in the White House.”