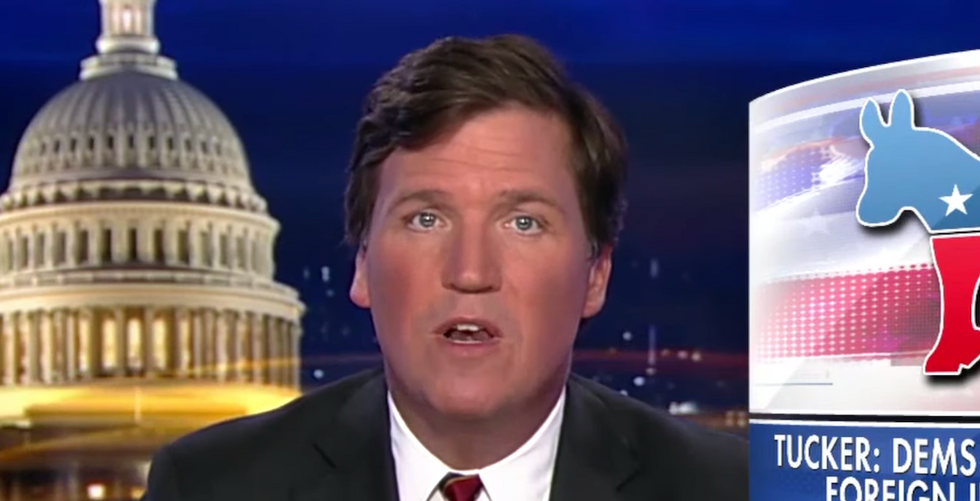 After Tucker Carlson's false and racist claim that white supremacy is a "hoax" earned the praise of former Ku Klux Klan leader David Duke, the Fox News host announced at the conclusion of his show Wednesday night that he would be taking a vacation.

"By the way, I am taking several days off — headed to the wilderness to fish with my son," Carlson said. "Politics is important. Fishing with your son? Sometimes more important. So I'm doing it."

Carlson has come under mounting scrutiny after arguing on his program that white supremacy is "just like the Russia hoax" — "it's a conspiracy theory used to divide the country and keep a hold on power."

The right-leaning network has not released an official statement about Carlson's remarks, which came just days after an avowed white supremacist opened fire in El Paso, Texas, killing 22 people and injuring more than two dozen others.

Duke, one of the nation's most infamous white supremacists, applauded Carlson, saying "Tucker is RIGHT! White Supremacy is a ZioMedia Conspiracy Theory! The term itself is a lie."

Before announcing his vacation, Carlson attempted to pour cold water on the controversy surrounding his remarks.

"I want to take a second to pass on a sincere message to officials in Washington, and particularly, to our colleagues on other cable news channels," Carlson said. "And it's this: Please, for the sake of the nation, calm down."

The Fox News host then pointed to other problems facing America, such as a "fading middle-class," a "terrifying drug epidemic" and "the national debt."

"This is a time of frustration, and it's a time of change. It's a hard time for America," he continued. "But this not a white supremacist country plotting the slaughter of its own people. It's a kind country full of decent people of all races, who like all people everywhere make bad decisions from time to time. But they mean well, and they generally try their best."

There’s been a tremendous response to last night’s show. The left wants to silence us. They won’t. Here’s a port… https://t.co/SHvishETIM
— Tucker Carlson (@Tucker Carlson) 1565213165.0

In the wake of the El Paso shooting, Acting Homeland Security Secretary Kevin McAleenan said that he has asked Congress to "invest more" to combat domestic terrorism.

"We've got a responsibility to call out hate in all of its forms, and white supremacist extremism is a critical element that we're trying to address," McAleenan told CBS News.

And, in late July, FBI Director Christopher Wray told Congress: "A majority of the domestic terrorism cases we've investigated are motivated by some version of what you might call white supremacist violence."

President Donald Trump on Wednesday met with victims in El Paso and Dayton, Ohio, the site of the second mass shooting that devastated the nation over the weekend.

The shooter accused of carrying out the massacre in El Paso wrote in a racist screed that "this attack is a response to the Hispanic invasion of Texas," directly echoing Trump's repeated warnings of "an invasion" at the border ahead of the 2018 midterm election cycle.

Federal authorities are treating the El Paso shooting as a case of domestic terrorism. Law enforcement officials still do not know what motivated the gunman in Dayton to open fire, but so far there is no evidence to suggest that he was politically or racially motivated.

Nevertheless, Trump and some Republicans in Congress have attempted to highlight the gunman's apparent support for Democratic Sens. Elizabeth Warren and Sen. Bernie Sanders in recent days. The president has also denied that he is racist, telling reporters Wednesday he's "concerned about the rise of any group of hate."

He tweeted later Wednesday: "The Dems new weapon is actually their old weapon, one which they never cease to use when they are down, or run out of facts, RACISM! They are truly disgusting! They even used it on Nancy Pelosi. I will be putting out a list of all people who have been so (ridiculously) accused!"

Democratic presidential candidate and former Rep. Beto O'Rourke, who was born and raised in El Paso and represented the area in Congress for six years, said Wednesday that Trump's incendiary and anti-immigration rhetoric has inspired acts of violence, arguing that the massacre in El Paso was "not an isolated incident" and a similar tragedy "will happen again" as long as Trump remains in the White House.

As evidence, the former congressman pointed to other deadly attacks carried out by white supremacists: the deadly Tree of Life Synagogue shooting in Pittsburgh, Pennsylvania, last October and the fire set at a mosque in Victoria, Texas, in 2017. He also pointed out how Trump laughed and joked after a supporter suggested shooting immigrants at a rally in May 2019.

"He says, 'That's OK with me,'" O'Rourke said of Trump's response to his supporter's violent remark. "He's not the source of racism in this country. This country has been racist as long as it's been a country, but he's certainly fanning the flames. He's certainly making violence like this more possible and more real."

O'Rourke and Warren both publicly called Trump a white supremacist this week.

"He has given aid and comfort to white supremacists. He's done the wink and a nod. He has talked about white supremacists as fine people," Warren told the New York Times on Wednesday, seemingly referring to Trump's infamous "both sides" defense after the deadly white supremacist rally in Charlottesville, Virginia, where a self-professed neo-Nazi killed a counter-protester.

Trump, for his part, has denied responsibility for emboldening violence by racists in the past, and he publicly condemned white supremacy Monday during a televised address to the nation.

"In one voice, our nation must condemn racism, bigotry, and white supremacy," he said. "These sinister ideologies must be defeated. Hate has no place in America.  Hatred warps the mind, ravages the heart and devours the soul."

But just two days later, Trump refused to point out the role ideology played in the El Paso massacre, arguing that he is concerned about "the rise of any group of hate."

He also accused his opponents of "looking for political gain" by linking his comments to the El Paso shooting. He claimed he would like to "stay out of the political fray," even though he attempted to tie the Dayton shooter to Democrats.

Trump claimed his rhetoric "brings people together," although he then called illegal immigration a "terrible thing for our country" and claimed he has "toned down" his rhetoric.