Cropping out ‘Immigrants Welcome,’ Ken Cuccinelli takes selfie with replica Statue of Liberty before removing it from DHS headquarters 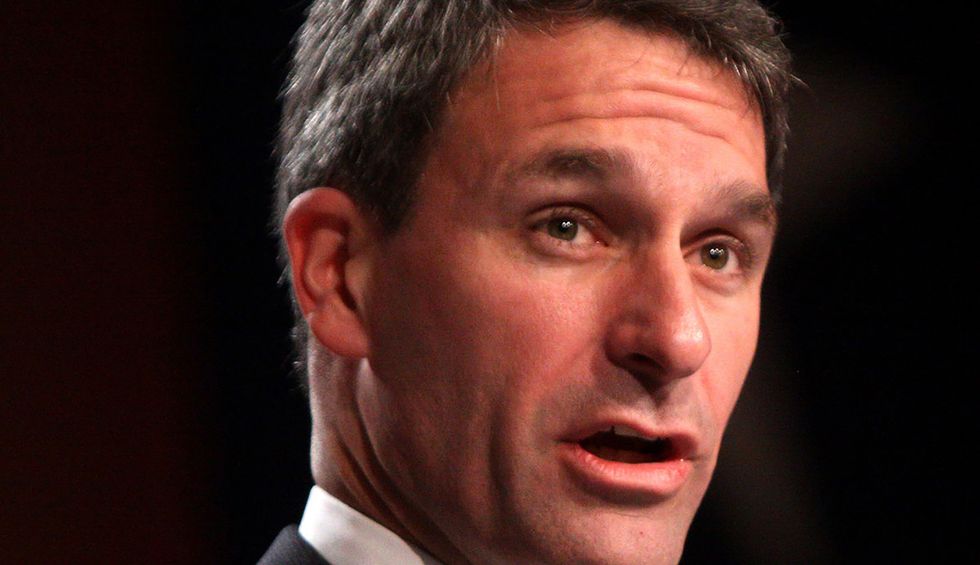 The removal of the statue—and the top official snapped with it just before—are “a direct representation of the Trump administration’s policy towards immigrants and American values,” said critics

Despite widespread outcry after saying the U.S. should only welcome immigrants who “can stand on their own two feet” and that Statue of Liberty was only meant to welcome Europeans to U.S. shores, President Donald Trump’s top immigration official Ken Cuccinelli had a replica of the famous monument removed from the Department of Homeland Security’s grounds on Thursday—but not before snapping a quick selfie.

The statue, made by artist Cesar Maxit, had been placed in front of DHS headquarters by the social justice groups United We Dream and MoveOn on Wednesday.

Before the statue was taken down, Cuccinelli, currently the acting Director of the Citizenship and Immigration Services office, made sure to post a picture of himself with the replica, along with a caption reading that he “love[s] liberty.”

MoveOn and United We Dream, however, noted that Cuccinelli cropped a sign afixed to the statue that read “Immigrants Welcome” out of his selfie.

The groups said that Cuccinelli’s words and actions this week, including the removal of the replica hours later, reflected the same xenophobic views that have become pervasive in the Trump administration.

“MoveOn and United We Dream brought the statue back to pay tribute to it as a symbol of welcome—and to honor the actual famed words written on the pedestal of the real statue: ‘Give us your tired, your poor, your huddled masses yearning to be free’—words that Cuccinelli intentionally butchered the day before while defending Trump’s bigoted policies,” MoveOn said in a statement.

Corinne Ball, campaign director for MoveOn, said the removal of the replica served as “a direct representation of the Trump administration’s policy towards immigrants and American values.”

“The Statue of Liberty is one of our most salient symbols of the timeless promise our country has made to welcome those seeking refugee and a life in America,” said Ball. “Despite the famous words of welcome written on the Statue of Liberty by Emma Lazarus, the Trump administration has dramatically escalated attacks on immigrants, asylum-seekers, and refugees—attacks that are both illegal and immoral: putting children in cages, forcibly separating families, illegally preventing people seeking asylum from applying, and banning Muslims from entering the country.”

“Given that,” she added, “it is hardly surprising that Cuccinelli snapped a selfie with our statue, cropping out the words welcoming immigrants, before having DHS officials take down the statue.”