Conservative writer says it all: 'There is no excuse for supporting this president' 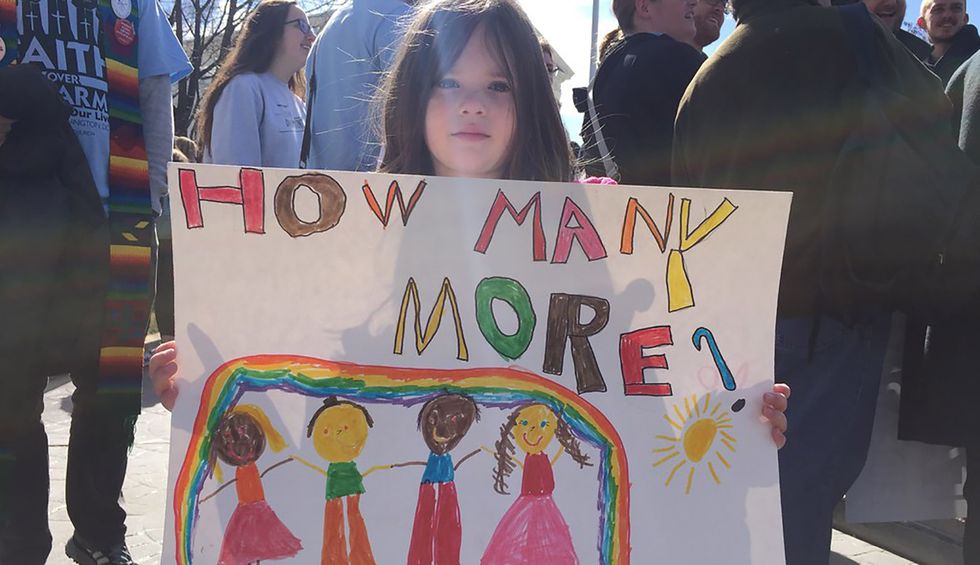 "United Church of Christ at March for Our Lives DC" by Justice & Witness Ministries, UCC is licensed under CC BY-NC 2.0
Dartagnan
and
Daily Kos
August 05, 2019

Writing for the Washington Post  (and reprinted here in the Salt Lake Tribune) conservative commentator Jennifer Rubin expresses what every American possessed of any decency or moral clarity should realize, now that the the murderous effects of Donald Trump’s deliberate, hate-filled, anti-immigrant rhetoric have once again inspired a mass killing of innocent Americans, this time in El Paso, Texas. As Rubin observes, there is really no longer any doubt where the blame for these killings lies.

For decades now, Republicans have insisted mass murders with semiautomatic weapons are not reflective of a gun problem. I can no longer comprehend how such a ludicrous assertion is remotely acceptable. But in one sense they are right: It's not merely Republicans' indulgence of the National Rifle Association that puts Americans' lives in jeopardy. It is the support and enabling of a president that inspires white nationalist terrorists - and even denies white nationalism is a problem.

Republicans in the United States Congress who claim to have any self-respect or moral conscience (assuming there are any remaining) really ought to pay attention to what she is saying—that their party, by its slavish acquiescence to Trump’s racism for purposes of political opportunism, shares with him the responsibility for these deaths.

If a Muslim preacher's words were repeated nearly verbatim by Islamic mass murderers, we'd consider him a threat to national security. And yet, when venom drawn from President Donald Trump's vicious attacks on immigrants, his channeling of "replacement" conspiracy theories, his dehumanization of immigrants and his demonization of the media show up in the ramblings of serial mail bomber Cesar Sayoc, the Tree of Life synagogue and Christchurch mosque mass murderers and now the slaughterer of innocents in El Paso, we don't collectively hold him morally accountable, insist his recant his views and demand an end to his presidency.

Rubin cites the dramatic spike in hate crimes across this country that has occurred since Trump assumed office, and specifically the rise in hate crimes committed by violent white supremacists such as this latest one who erased the lives and futures of 20 innocent people in El Paso. Those murders far exceed any committed by “Muslim extremists.” White, right-wing domestic terrorists killed more people in 2018 than in any year since 1995, the year another white, right-wing terrorist named Timothy McVeigh blew up a federal building in Oklahoma City. Hate crimes in major U.S. cities rose to a decade high in 2018, even as the overall crime rate decreased. There is no other possible cause for this increase except for the venom spewed by Donald Trump.

In sum, we are awash in hate crimes and white nationalist-inspired mass murders. We have a president whose words inspire and bolster perpetrators of these heinous acts. That makes Trump not only a moral abomination, which no policy outcome can offset, but a threat to national security. Those encouraged by his words in recent years kill more Americans than Islamist terrorists.

If that is not justification for bipartisan repudiation of this president and removal from office at the earliest possible moment I don’t know what is. Those who countenance and support this president for his white-grievance mongering are not merely “deplorable” but dangerous.

The people killed in El Paso are dead because of Donald Trump. And by their silence, Republicans at all levels of government, and their Party as a whole, are complicit in those deaths.

But we already know what they will do.