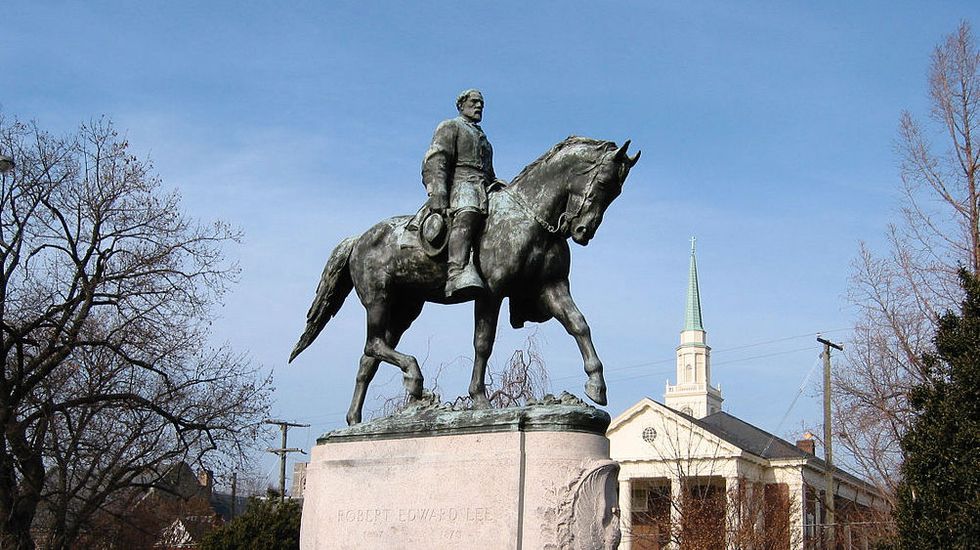 According to the latest SPLC tally, there are roughly 780 Confederate monuments standing across the U.S. That’s a staggering number of tributes to the losing side of a treasonous insurrection; a war that ended not with a treaty, but with the South’s full surrender. More importantly, those statues honor people who fought for a nation founded to preserve black enslavement—a fact enshrined in its Constitution, its member states’ declarations of reasons for secession, its vice president’s most famous speech. It’s no wonder that white supremacists of every stripe—from the neo-Nazis who occupied Charlottesville to the man who currently occupies the executive office—are so fiercely defensive of them.

As Trump and the violent racists in his base contribute to an atmosphere of fear and hatred, one in which white racial terror violence is on the rise, the need to take down Confederate monuments has gained even greater urgency. Since the 2015 white supremacist murder of nine black parishioners in Charleston—a horrific meeting of America’s gun and race problems—114 monuments have been removed in cities from Brooklyn to Durham to Dallas. Yes, that’s a mere fragment of the total number of Confederate monuments. But communities across the country are currently embroiled in fights to remove white supremacist symbols from their public spaces, and few of those battles make it to the national press.

Below is an overview of the status of just a few Confederate monuments around the country.

Confederate-Named Army Bases: There are 10 Army bases in the South named for Confederate soldiers. Fort Gordon is named for General John Brown Gordon, the reputed head of the Reconstruction-era Ku Klux Klan in Georgia; Virginia’s Fort Lee honors Robert E. Lee, the man who led the treasonous fight to maintain black enslavement. In late July, the League of United Latin American Citizens proposed that Texas’s Fort Hood—currently named for John Bell Hood, who ditched the U.S. Army to take up arms for the insurrectionist Confederacy—be renamed for Special Forces Master Sgt. Roy Benavidez, a Texas native who received the Medal of Honor and five Purple Hearts for his service during the Vietnam War. Military news outlet Stars and Stripes notes that LULAC’s proposal “will go to the secretary of the Army then to the appropriate committees in Congress.” In related news, an amendment to the House version of the 2020 National Defense Authorization Act would prohibit the Pentagon from naming any assets after Confederates going forward.

District of Columbia: The statue of Confederate General Albert Pike in D.C. stands on National Park Service grounds. On July 30, Congressional Delegate Eleanor Holmes Norton introduced legislation to remove the statue from the plot of federal land it currently occupies. Instead, Norton is advocating for the rendering of Pike to be moved to a museum, or some other place it can be properly contextualized. She notes that the Freemasons, who funded the statue’s placement back in 1901, have co-signed her call for removal. A press release on Norton’s website declares that Pike “was a Confederate general who served dishonorably and was forced to resign in disgrace. It was found that soldiers under his command mutilated the bodies of Union soldiers, and Pike was ultimately imprisoned after his fellow officers reported that he misappropriated funds. Adding to the dishonor of taking up arms against the United States, Pike dishonored even his Confederate military service. He certainly has no claim to be memorialized in the nation’s capital. Even those who do not want Confederate statues removed will have to justify awarding Pike any honor, considering his history.”

Georgia: In 2010 the Georgia General Assembly passed a law that prohibits the removal of Confederate monuments. (Nearly identical “Heritage Laws” exist in Alabama, Mississippi, North Carolina, South Carolina, Tennessee and Virginia.) In April 2019, Governor Brian Kemp signed a bill that made relocation of Confederate statues, even to museums, illegal, and increased penalties for those caught protesting Confederate markers using defacement. Legislators in Atlanta—the blue dot in this Confederate-obsessed red sea—recently announced that they plan to put up plaques that add historical context about slavery next to four of the city’s Confederate markers. “This monument should no longer stand as a memorial to white brotherhood,” one sign notes; “rather, it should be seen as an artifact representing a shared history in which millions of Americans were denied civil and human rights.”

Tennessee: In 2017, the lawmakers in Memphis undertook a brilliant political strategy to circumnavigate the state’s repressive “Heritage Law” that prevents the removal of Confederate monuments. The law prohibits removal of Confederate statuary on public grounds, so city legislators sold two downtown parks to a private nonprofit for just $1,000 each. This allowed for the successful removal of statues honoring Confederate President Jefferson Davis and General Nathan Bedford Forrest, the first grand wizard of the Ku Klux Klan. The Sons of Confederate Veterans (a neo-Confederate group) are currently trying to convince a court to force the return of the statues. In the meantime, the statues are sitting in storage while a new site for them is chosen.

California: It’s a testament to the insidiousness of the Confederacy—if not the insurrectionist uprising, certainly the ideology—that California was once the home to many Confederate markers. Honorifics to Confederates included the Dixie School District just outside San Francisco (renamed Miller Creek Elementary School District just this past July) and the two sequoias in Sequoia National Park named for Robert E. Lee (both still standing, names unchanged). In 2004—again, 2004—the Sons of Confederate Veterans erected a nine-foot-tall monument honoring Confederates in Santa Ana Cemetery. The marker praised “the sacred memory of the pioneers who built Orange County after their valiant efforts to defend the Cause of Southern Independence.” In July, protesters showed their disdain for the granite marker using defacement, spray painting one side red and scrawling the word “racists” down its face. Less than a month later, on August 1, the monument was removed by the city and placed in storage. Orange County Cemetery District General Manager Tim Deutsch reportedly stated the protesters’ paint job had made the monument “an unsightly public nuisance.”

Montana: Disgusted by the murderous violence in Charlottesville, members of the American Indian Caucus of the Montana Legislature drafted an open letter to appeal to state legislators to remove a Confederate memorial. “The fountain was commissioned by the United Daughters of the Confederacy, an organization that openly supported the white supremacist views and mission of the early Ku Klux Klan,” the letter noted. “This is the only Confederate monument in the northwestern United States.” The memorial—a fountain that sat for 101 years in the city’s Hill Park—was removed in on August 18, 2017. A group called the Equity Fountain Project put out a call for new designs to replace the old monument and raised the funds needed to build and maintain the marker. Citizens of Helena chose, via vote, the final fountain design, titled the “Sphere of Interconnectedness.” Equity Fountain Project head Ron Waterman expressed hopes the fountain will showcase the “values of equity and equality, diversity, respect, generosity and compassion, tolerance, service, peace and justice.” Once the new monument is placed, Montana will become the first city to remove and replace a Confederate marker.

Tennessee: The city of Franklin, Tennessee, has an ongoing lawsuit against the UDC to determine who owns the land in one local public park containing a Confederate monument erected by the UDC in the late 19th century. The UDC threatened legal action when Franklin city leaders announced plans to add markers recognizing African-American historical figures to the park. Despite those threats, the city is going forward with construction of the markers.

Maryland: For months, Baltimore’s political leaders debated the fate of its Confederate statuary. After the white supremacist violence at the Unite the Right rally, the city acted swiftly to remove those monuments, taking down four markers on the night of August 15 and the wee hours of the morning that followed. Those statues were placed in storage. A recent New York Times investigation notes that city officials are “asking for a detailed plan from anyone interested in acquiring” the monuments.

Kali Holloway is the director of Make It Right, a project of the Independent Media Institute. She co-curated the Metropolitan Museum of Art’s MetLiveArts 2017 summer performance and film series, “Theater of the Resist.” She previously worked on the HBO documentary Southern Rites, PBS documentary The New Public and Emmy-nominated film Brooklyn Castle, and was Outreach Consultant on the award-winning documentary The New Black. Her writing has appeared in AlterNet, Salon, the Guardian, TIME, the Huffington Post, the National Memo, and numerous other outlets.

This article was produced by Make It Right, a project of the Independent Media Institute.