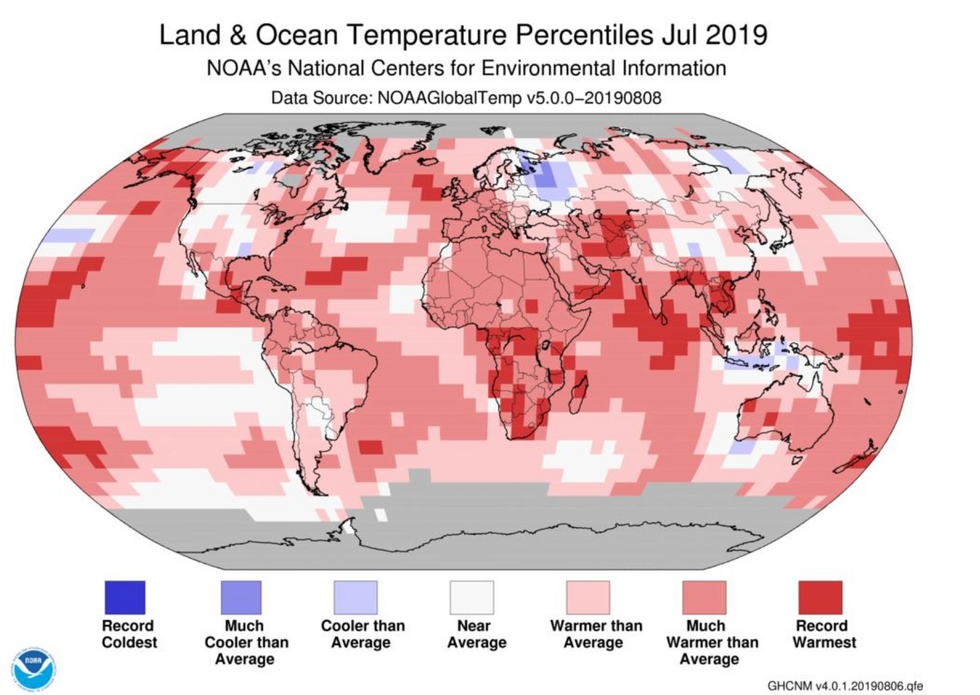 As climate scientists raise alarm over hotter and hotter global temperatures, a top U.S. weather agency reported on Thursday that July 2019 was the hottest month the planet has ever experienced since the government began recording global temperatures nearly 140 years ago.

July's average global temperature represents a continuation of a pattern that began more than 30 years ago; last month was the 415th consecutive month when the world was warmer than average. Last month, NOAA reported that June 2019 was the hottest June on record.

The trend seen year-round over the past three decades has been coupled with a pattern observed over an even longer period of time; July 2019 was the 43rd July in a row with above-average temperatures.

Rep. Ro Khanna (D-Calif.) warned on Twitter that the trends scientists are observing represent a "new normal under climate change," which won't change unless the U.S. takes "bold action to confront the climate crisis."

Khanna is a staunch supporter of decisive climate action like the Green New Deal, which would replace the United States' fossil fuel industry, one of the world's biggest contributers to the climate crisis, with a renewable energy economy.

The high global temperatures last month were reflected in news stories about extreme heatwaves throughout Europe and wildfires in Greenland.

Scientists also recorded record-low levels of sea ice in the coldest parts of the world. In the Arctic in July, ice was recorded as being 19.8 percent lower than average.

"It looks like the worst case scenario put forward by the IPCC could be an underestimate because we are seeing ice melting now that we expected 30 to 40 years from now," he added. "It's alarming because it's very fast-paced and the consequences are hard to predict."