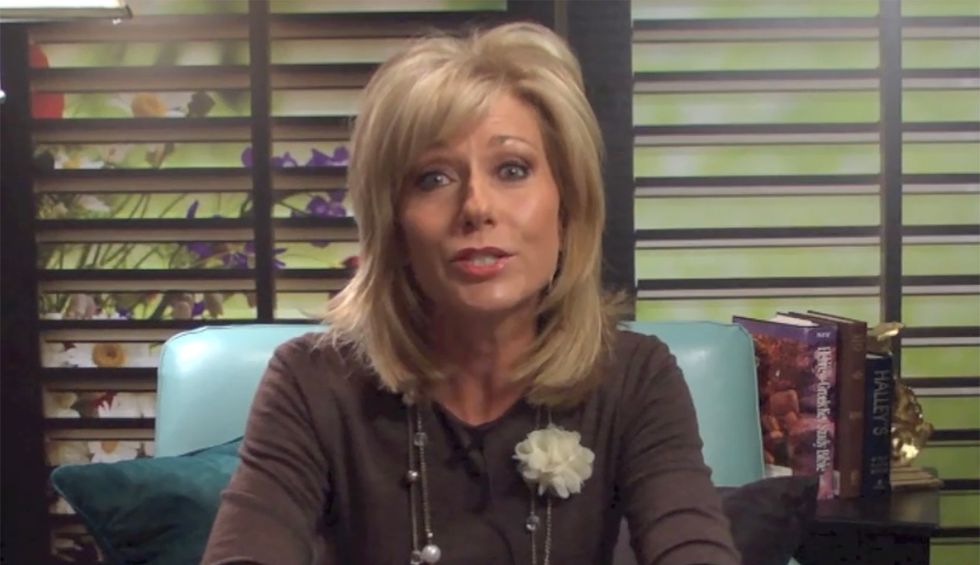 Beth Moore is a Christian evangelist, author, and the founder of Proof of Life Ministries. Needless to say, she’s a major figure in the world of evangelical Christianity, but she’s carved out a name for herself as an anti-Trump voice amongst evangelicals, as well as someone who’s been willing to speak out against sexism in Christian culture. Now, she’s catching heat from her fellow Christians for daring to speak out on another contentious subject.

In a series of tweets posted to her official Twitter account just days after the mass shootings in El Paso and Dayton, Moore lamented the fact that the El Paso shooter invoked both Christianity and white nationalism in his social media postings.

“Any ‘Christ’ that can be invoked in support of white nationalism is a false Christ of the highest, most hellish order,” Moore tweeted on August 6. “An anti-Christ. A wholly-opposite christ. No such christ is the Christ Jesus of Scripture who taught His followers a love that sacrifices life & limb for others.”

Any “Christ” that can be invoked in support of white nationalism is a false Christ of the highest, most hellish ord… https://t.co/tvNhJVw7aF
— Beth Moore (@Beth Moore)1565096072.0

While there were replies that supported her sentiment, some thought she was being too “politically correct.”

In her next tweet, Moore was more specific and mentioned the El Paso shooter directly.

“Let it be known, let it be declared by genuine followers of Jesus, that the man who opened fire in El Paso may invoke a christ of some kind but it is NOT our Christ,” she wrote. “His christ would be unrecognizable to us. Unrecognizable in Scripture. We claim no christ of white nationalism.”

In the comments, there were numerous people who didn’t seem to know what she was talking about.

In her third tweet, Moore called on Christian leaders to be more forceful in speaking out against white nationalists who invoke Christianity to justify acts of violence.

Again, the replies had voices of support for Moore’s tweet, but others seemed to take offense at the fact that she’d suggest Christianity is a driving force for many white supremacists.

@pastorkenrp @BethMooreLPM Yet we have heard ZERO from Beth on this issue. Even when NY passed abortion up to birth, crickets.
— Robin Selfن (@Robin Selfن)1565107426.0

@BethMooreLPM Beth, I’ve been a fan of your teaching for years and years. And as a friend from afar. Stop. Stop wei… https://t.co/MI4FjQtZXH
— Paulette Jackson (@Paulette Jackson)1565133391.0

@BethMooreLPM So does this mean you will actually answer the questions being asked about the Bible and homosexualit… https://t.co/5H3ziDWF6u
— Tim McDonald (@Tim McDonald)1565131386.0

Writing for the Friendly Atheist, Sarahbeth Caplin pointed out that the reaction to Moore’s tweets is indicative of the contradictions that encapsulate evangelical support for Trump.

“A president who spews racism doesn’t seem to rankle those Christians, but a woman who refuses to be silent is doing the trick. I hope she keeps speaking up.”