Campaign demands ban on 'killer robots' — and calls out US obstruction 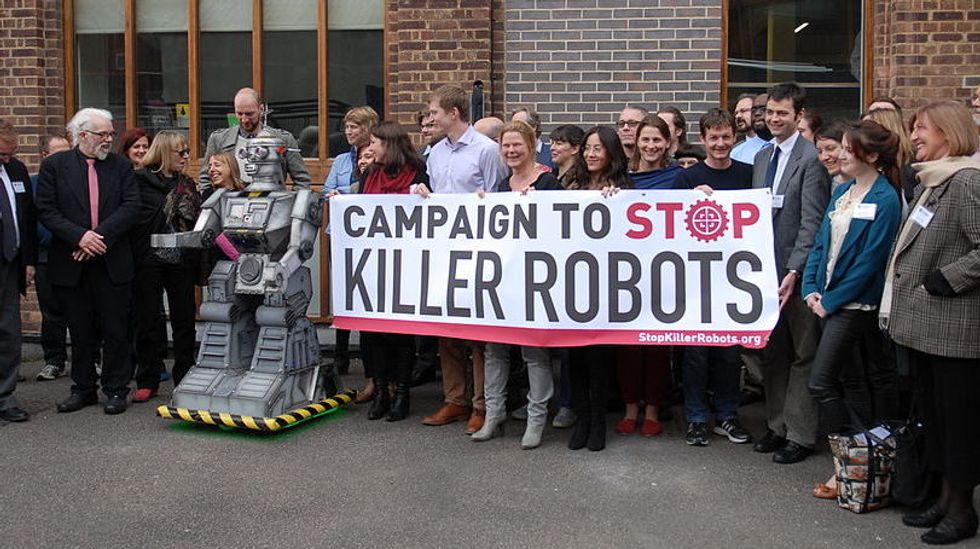 Human rights advocates renewed their call for a preemptive ban on so-called "killer robots" on Monday as they accused the United States of being among a small number of countries working to halt progress on an international treaty to address the numerous concerns the weapons raise.

The accusation came a day before representatives from dozens of countries gather in Geneva to meet on the Convention on Certain Conventional Weapons, also known as the Inhumane Weapons Convention.

The convention, according to the Campaign to Stop Killer Robots, has yet to produce a treaty with teeth. Such a document would effectively ban lethal autonomous weapons systems, as they're formally known, by requiring "meaningful human control over the use of force."

"Lives will be taken based on algorithms" without that kind of safeguard, the campaign said in a tweet on Sunday.

The U.S. isn't the only nation being singled out for being an outlier towards progress; the campaign says (pdf) that other military powers including Australia, Israel, Russia, South Korea, and the United Kingdom are also thwarting the advancement of a ban.

#Russia + United States must learn from history + not repeat past mistakes. Launch negotiations on a treaty to reta… https://t.co/rIWmquLnGN
— Mary Wareham (@Mary Wareham) 1566219192.0

Twenty-eight governments back (pdf) a ban.

"Most governments want to negotiate a new treaty to retain meaningful human control over the use of force," said Steve Goose, arms director at Human Rights Watch (HRW), which coordinates the Campaign to Stop Killer Robots, in a statement Monday. "But with a small number of countries blocking any progress," he continued, "these diplomatic talks increasingly look like an attempt to buy time and distract public attention rather than to urgently address the serious challenges raised by killer robots."

In its fresh statement, HRW summed up those challenges:

Killer robots would be unable to apply either compassion or nuanced legal and ethical judgment to decisions to use lethal force. Without these human qualities, the weapons would face significant obstacles in ensuring the humane treatment of others and showing respect for human life and dignity.

The call for a ban is backed by global public opinion, and by science and technology experts, artificial intelligence (AI) experts, Nobel laureates, and religious leaders.

"The public," said HRW's Goose, "expects greater efforts from governments to prevent the development of fully autonomous weapons, before they proliferate widely—in fact, nothing less than a legally-binding ban treaty."