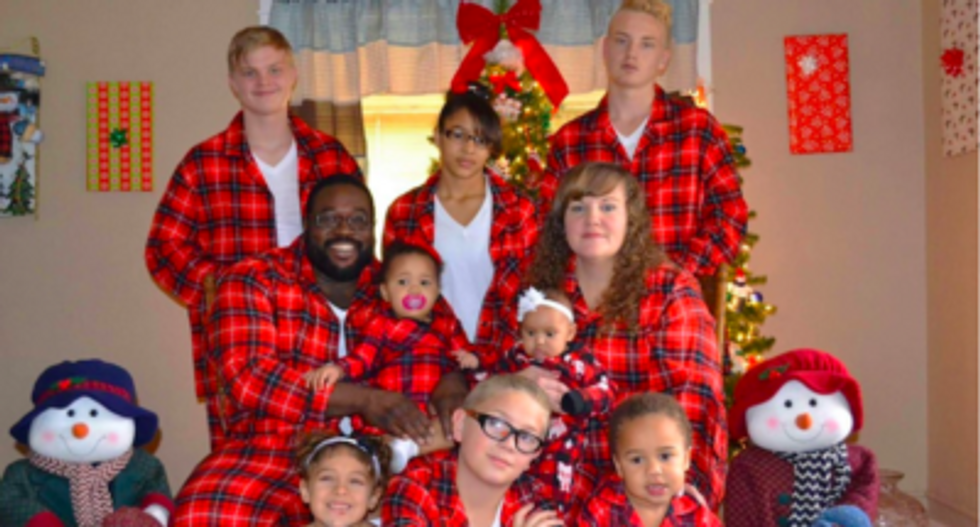 Tiffany Mitchell met her husband, Cedric, the week she went to Phoenix, Arizona, to look for a new place to live. She wanted to leave Twin Falls, Idaho, because of what she describes as the town's pervasive racism. She flew back on a Sunday, he visited her on a Tuesday, and never left. They decided to stay in Twin Falls because the weather there was better for his asthma. He got a job at a sugar factory. A few years later they were married.

She had kids from a previous marriage. Her first husband, Cody Hanks, was shot and killed by a police officer. After Tiffany and Cedric got married, they had three kids of their own, creating a large, interracial family.

On June 7th, 35-year-old Mitchell was driving down Heyburn Avenue, a flat-two lane road dotted by fast-food joints and trees. He was going between 75 and 79 miles, according to the affidavit of probable cause, in a 30 mile an hour zone. Dwayne Steiner's 1997 Dodge Ram was stopped at the intersection, waiting at a red light. Mitchell's car struck Steiner from behind, causing both cars to jump into oncoming traffic, colliding with two other vehicles. Mitchell was airlifted to a hospital in Boise, while Dwayne and his wife Marryann Steiner were taken to a hospital in Twin Falls. Maryann Steiner died of her injuries two days later.

At his arraignment in July, prosecutors charged Mitchell with first-degree murder and seven counts of felony aggravated battery (for the other people injured in the crash). In Idaho, first-degree murder is punishable by death or life in prison. The lead prosecutor in the case, Grant Loebs, tells Raw Story that he's not sure whether he'll pursue capital punishment. "I don't know, it's too early to think about the death penalty." He claims that there's no way it was an accident. "It's not like 'Oops, I was texting. Nobody believes that." The state is arguing that Mitchell hadn't tried to brake or swerve before the collision.

His wife disagrees. "He did not do this on purpose. He would never hurt anyone else." Steiner and Mitchell did not know one another.

His family thinks underlying health issues might have contributed to the crash.

The judge refused bond, so Mitchell is in jail, while his wife struggles to figure out how to feed the kids and make enough money to pay for a decent lawyer and deal with the thousands of dollars in court fees. She works with people with disabilities five days a week and as a home care provider four days a week.

"My three-year-old talks in his sleep and says "Can someone find my Daddy?" Mitchell tells Raw Story.

The case deviates from standard procedure. For example, California has a specific vehicular manslaughter charge, which is a misdemeanor, carrying a maximum of one year in prison. A review of recent traffic fatalities in Idaho shows that the standard punishment is far less serious. A white pick-up driver in Blane, Idaho, killed three little girls while driving drunk last Saturday. He's being charged with three felony charges of vehicular manslaughter and two charges of aggravated DUI, reports the Idaho Statesman. Another fatal car crash in August led to the death of a man's wife and drugs found meth and heroin in the car. So far he's been charged with drug possession. In July, a seven-year-old-boy was struck and killed while riding his bike. No one was charged in his death.

The severity of the charges has raised Mitchell's suspicions that prosecuting attorney Grant Loebs is trying to look "tough-on-crime" to get re-elected. She also thinks it's only happening because her husband's black, and points out that other recent traffic deaths involved white people.

Mitchel's suspicions that her husband's treatment may be race-related were further aroused after members of the community posted vicious attacks to social media, including suggestions that Mitchell be hung or lynched.

"Just take him out and hang him, that's what he deserves," Lisa Sallee Bratt wrote on Facebook. Bratt, who is married to a Chris Bratt, Deputy Sheriff of the Twin Falls County Sheriff's Office, declined to comment.

Raw Story obtained screen grabs of Bratt's comments and others.

One of his adopted sons tried to stop the social media bullying. He said, 'That's my dad. And he's raised me to be a respectable member of society. He has small children.' They told him to fuck off, that his children should know he's a murderer."