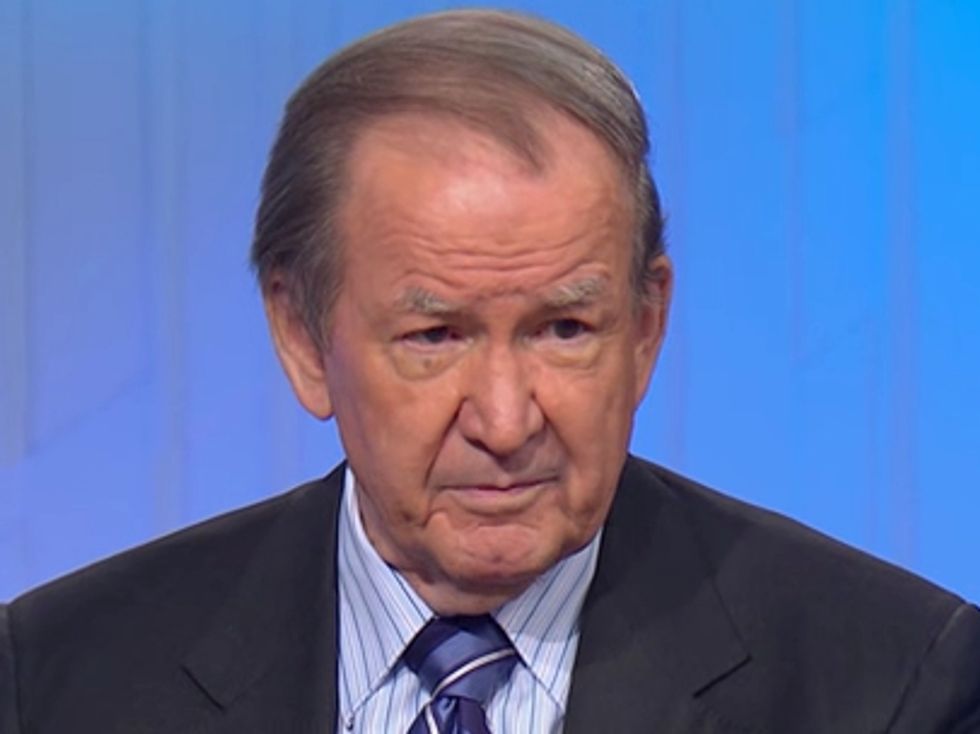 Pat Buchanan, a longtime anti-LGBTQ white supremacist Christian nationalist pundit will co-host a re-boot of "The McLaughlin Group," a Sunday morning public affairs, news, and commentary TV talk show know for the fast and hot takes of its conservative creator, John McLaughlin. The show will be syndicated by Maryland Public Television and air on PBS stations, Media Matters reports.

Buchanan, who worked in the Nixon, Ford, and Reagan White Houses, co-hosted the original version of CNN's "Crossfire," and was even a regular contributor on MSNBC, before the network parted ways with him over offensive commentary in one of his many books.

Indeed, Buchanan has a long and dark history of homophobia, anti-semitism, Holocaust diminution, racism, and bigotry., as NCRM repeatedly reported.

For example, Buchanan once claimed that "America has been the best country on earth for black folks. It was here that 600,000 black people, brought from Africa in slave ships, grew into a community of 40 million, were introduced to Christian salvation, and reached the greatest levels of freedom and prosperity blacks have ever known."

(They were slaves, stolen from their homes, beaten, raped, separated from their families, whipped, and later, once slavery was over, suffered hundreds of years of inequality that continues to this very day.)

In 2011, Buchanan exploded over same-sex marriage, claiming it "is being imposed dictatorially," during this screed:

"Vaughn Walker, a gay federal judge in San Francisco, has ruled that same-sex marriage is guaranteed by the 14th Amendment. Can anyone believe this absurd notion of equality was intended by or written into the Constitution by the Congress that produced the 14th Amendment?"

"Although gay marriage has been rejected in 31 states in referenda, judges continue to declare that such unions be treated as marriages," Buchanan continued, literally denigrating the 17,000 marriages of California same-sex couples. "An idea of equality rejected democratically by voters is being imposed dictatorially. In December 2010, a repudiated liberal Congress imposed its San Francisco values on the Armed Forces, by ordering homosexuals admitted to all branches of the service. Indoctrination of recruits, soldiers, and officers into an acceptance of the gay lifestyle will transfer authority over the military, the most respected institution in America, to agents of a deeply-resented and widely detested managerial state."

These are but two of countless examples of Buchanan's white supremacy and anti-LGBTQ hate. Media Matters produced this short clip exposing Buchanan's history of hate:

Media Matters, which reports that Buchanan will co-host the reboot of "The McLaughlin Group," and that it will air on PBS stations, offers more evidence of Buchanan's "Anti-LGBT Bigotry."

Media Matters also reports that Buchanan "has spent decades calling for the defunding of public broadcasting," complaining it “glorified homosexuality.”