Anthony Scaramucci's argument that Trump isn't a racist makes no sense: 'He treats people like objects' 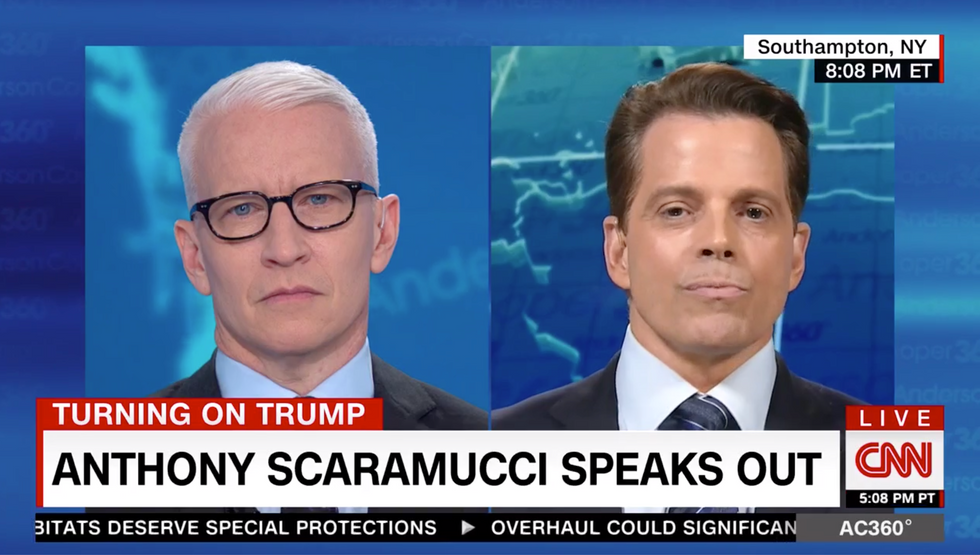 Now, he seems intent on completely burning that bridge. In a discussion with CNN's Anderson Cooper on Monday night, Scaramucci didn't hold back on criticizing the president, repeating his call that the Republican Party should abandon Trump and pick a new nominee for the 2020 election.

But even as he heaped criticism on Trump, Scaramucci offered a perplexing defense of the president in one respect: He insisted Trump isn't a racist.

"At the end of the day, he treats people like objects," Scaramucci said. "So there's no way he's a racist because when he's looking at you he doesn't see color, he just sees a potential transaction, an opportunity or a detriment. And so, that's not racism — that might be narcissism, I'm not a psychiatrist so I don't know — but it's not racism because I've watched him do it. It's like a worse level than racism. You know what I mean? It's like racist against everybody. He could care less. You're just an object in his way, either for or against." [Emphais mine]

On the one hand, who cares what Scaramucci says? This latest blitz is clearly just a bid for attention. And while he professes to have changed his heart about the president, it hardly seems genuine. Nothing about the past few weeks has really marked a sharp contrast with Trump's past public behavior; if you were on board for his worst antics three years ago, it's not clear why you'd give up now. In fact, in 2015, Scaramucci denounced Trump as a hack and said, "I don't like the way he talks about women." When it was convenient for Scaramucci to abandon those criticisms, he did. The only thing that seems to have changed for Scaramucci now is that it's become convenient for him to become a Trump detractor.

But regardless of his personal credibility, Scaramucci's claims about Trump are worth taking apart. Like many Republicans, Scaramucci seems to have something ideologically invested in the word "racist," which gives him reason to deny that Trump could be racist (even while still being deeply critical of the president, and saying he may even be worse than racist).

Scaramucci's claims, however, don't add up. For example, just "treating people like objects" — a repugnant idea on its own — doesn't preclude being racist. Indeed, it seems downright likely that if someone does view people as objects that those perceptions could easily be shaped by racism.

Consider one Trump quote as reported by John O'Donnell in 1991:

It's impossible to sensibly deny that this is a racist statement. But it's also perfectly compatible with Trump viewing people as objects.

More importantly, though, another way in which Trump is racist should be obvious to everyone, yet much of the media has spent a good deal of effort denying the fact: He leads a racist political movement.

His takeover of the GOP was predicated on his anti-immigration platform, which specifically targeted racialized groups as unwelcome and danger others — in particular, Muslims and Hispanic people. As many have argued, he has come to embody white identity politics in the United States, an inherently racist political project. And heading into 2020, he seems committed to running on with blatantly racist appeals. He campaigned in 2018 and 2016 in exactly the same way.

Scaramucci even basically acknowledges this. Talking about Trump's "go back" attacks on lawmakers of color, Scaramucci recounted saying to the president: "Why do you want to go full-on racism like that?"

In his initial remarks, Scaramucci seemed to be arguing that, personally, Trump didn't harbor any personal racial animus. As I explained his account makes little sense. But even if Scaramucci could muster a coherent argument for this claim, it would still be belied by the fact that Trump actively uses racist attacks as a tool of political demagoguery. He is, as I said, leading a racist movement. There's no coherent definition of racism that wouldn't include such a person adopting such a role.

But many Republicans have a lot invested in a very narrow, and indeed, potentially nonsensical, understanding of racism. It allows them to denounce "racism" in the abstract while still supporting many ends that ultimately are racist, at least in effect. That leads people like Scaramucci to engage in verbal backflips even while they're trying to speak out against someone as horrifically racist as Trump.