A people’s history of board games 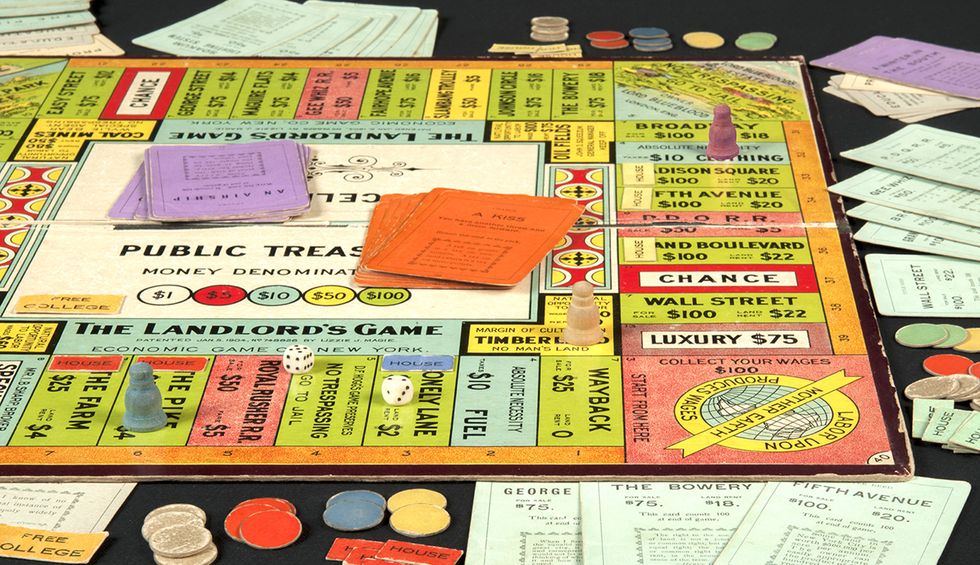 We are living in the golden age of board games. Thousands of new board games are released every year, played by millions of people around the world.

Board games, filled with strategy and exciting tension, have made a decisive comeback even in the era of video games.

Like all forms of art and entertainment, games are often a reflection of our values as a society, and they can also influence how we think and act. If you looked at games only like Monopoly, Risk, or Settlers of Catan, the most-popular board games would seem to center on winning wars, exploiting resources, and screwing over somebody else.

But many games through history have been about making the world a better place, from critiquing capitalism to fighting for women’s rights.

The most significant board game about social change might not be what you’d expect.

In the early 1900s, an activist named Elizabeth Magie invented a surprisingly popular game that she called The Landlord’s Game. The game became an underground sensation: Families and college students made their own copies, playing it in schools and homes, especially throughout the Northeast but also in the Midwest. Magie’s intention was to teach players the “practical demonstration of the present system of land-grabbing with all its usual outcomes and consequences.”

She wrote that she believed her game could change the minds of a generation of people, writing: “Let the children once see clearly the gross injustice of our present land system and when they grow up, if they are allowed to develop naturally, the evil will soon be remedied.”

Today, The Landlord’s Game is more commonly known as Monopoly. Yes, that Monopoly.

After spending decades as an underground hit, the game was eventually stolen from Magie by a man named Charles Darrow. Darrow learned the game from a friend and became infatuated. He began making his own copies by tweaking the art and marketing it as his own, advertising it as the Monopoly we know today (which was one of many names Magie had previously used for the game).

After Parker Brothers bought the rights from Darrow in 1935, they learned that he may not have been the true inventor of the game—but chose to continue selling it, anyway. Darrow’s stolen version of The Landlord’s Game became the most commercially successful board game of all time. Darrow also became the first ever millionaire game-designer.

Though the principles Magie sought to instill in the game were eventually stripped, some of her values still live on in Monopoly in surprising ways. For instance, did you ever wonder why you collect $200 when you pass “Go”? Magie thought players had earned it because they had “performed so much labor upon Mother Earth.” This wasn’t sarcasm; in one of Magie’s many versions of The Landlord’s Game, players banded together for economic equality.

It’s fitting and fascinating that the game most associated with greed was created to protest it. It serves as the greatest lesson Magie’s game sought to teach: money consumes everything.

Also in the early 1900s, the women’s suffrage group known as the British Women’s Social and Political Union developed the game Suffragetto, played on a board akin to a modified version of chess.

At the time it was created, the union was frustrated with the lack of progress toward women’s rights and the relatively timid approach by many organizing for the cause. They took a more militant stance. Sociologist Renee Shelby, who has done much of the work to preserve the game’s history, describes the organization that invented it like this:

The WSPU was formed in response to the slow-moving pacifist tactics of other suffragette groups. They engaged in attention-getting strategies including disruption, occupation, destruction of public property, arson, and hunger-strikes. Police responded en force, leading the WSPU to create a 30-woman bodyguard to protect its leaders and members.

Suffragetto was designed to spread the word about the union’s mission and tactics, as well as to raise funds from the union’s supporters through sales of the game.

In Suffragetto, one player emulates the British Women's Social and Political Union, while the other player takes on the role of the police fighting to stop them. The game’s premise is similar to chess or checkers, in that each player starts on one end of the board and maneuvers pieces to capture the opponent’s pieces.

Suffragetto’s rulebook, updated and edited by Shelby, described the goal of the game as being to “break past Police lines and enter the House of Commons” and to “prevent the Police from entering Albert Hall, an oft-used meeting space of the Women’s Social and Political Union.”

While it never enjoyed mainstream popularity, Suffragetto can still be played today through a “print-and-play” version available online.

It may sound like a joke, but a board game called Class Struggle was real.

Created by Bertell Ollman, a professor of politics at New York University, the game was first published in 1978. Its explicit purpose was to promote Marxism, and it became a surprise hit. Before going out of print, the game sold more than 230,000 copies, primarily in the late ’70s and ’80s. That is incredibly successful by any board game’s standards.

At the start of each round of Class Struggle, players roll the dice to determine whether they are workers or capitalists. Workers can create alliances with each other, form trade unions, and organize their own political parties. The workers win by sparking a revolution; the capitalists win by launching nuclear war.

It might seem ridiculous, but the tongue-in-cheek nature of the game is likely what led to its popularity. In fact, one of the cards in the game reads: Together with your fellow workers, you have occupied your factory and locked your boss in the toilet. Capitalists miss 2 turns at the dice.

While the game isn’t regularly played today, it left a lasting impression.

Today’s progressive games for all

Games that are about making the world better don’t just exist in the past. In fact, creating and publishing games that address issues of social and economic change is a growing trend. Here are just a few from the past 15 years:

● Co-opoly: The Game of Cooperatives, which is about building a new economy

● Rise Up: The Game of People & Power, a game on community organizing and activism

● Space Cats Fight Fascism, a game that is exactly what it sounds like

● STRIKE! The Game of Worker Rebellion, which will debut in late 2019

● Bloc-by-Bloc, a game about insurrection

● Dawn of Peacemakers, a game focused on preventing war

The modern movement to create games that reflect and promote social change values is on the rise, but more players are needed. So call your friends, gather some games and snacks, and play your way to a better world.

Brian Van Slyke wrote this article for YES! Magazine. He is a co-founder and head game designer of the TESA Collective, where he creates custom tools, programs, and games for organizations. Van Slyke also designed TESA’s games, such as Rise Up, Space Cats Fight Fascism, and Co-opoly. Follow him on Twitter. Follow TESA on Facebook and Twitter.