9 dead, 26 injured: Here's what we know about the Dayton, Ohio mass shooting 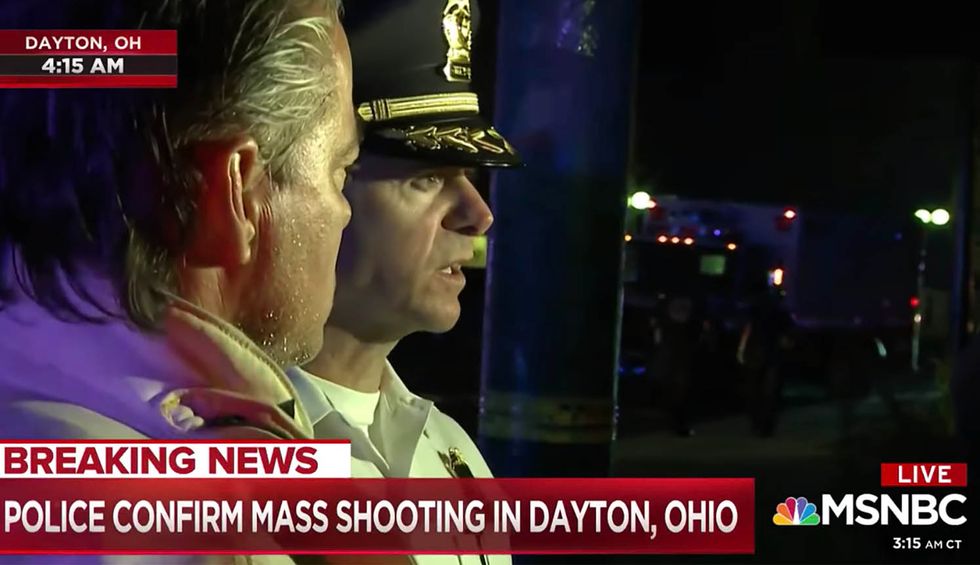 Less than 24 hours—in fact, barely 13 hours—after a mass shooting occurred in a Walmart in El Paso, Texas, a second mass shooting has plagued the United States. This time, the act of violence occurred in Dayton, Ohio. As reported by CNN, nine people have been killed and another 26 have been injured. Dayton Police report that the suspect is dead.

We don’t have all the information yet, but here’s what we do know. Dayton Deputy Director and Assistant Chief of Police Lt. Col. Matt Carper told reporters that the shooting took place around 1 a.m. on East 5th Street in the downtown Dayton area, called the Oregon District.

Montgomery County Emergency Services spokesperson Deb Decker said the shooting took place as the suspect was headed toward Ned Peppers, a bar in the area. Carper said the shooter fired multiple rounds from a “long gun” and was wearing body armor. Since then, Mayor Nan Whaley, a Democrat, has given more detail, noting that the shooter used a “.233 high-capacity” gun. She also said the suspect had additional magazines on him.

The suspect, who has not yet been identified, was shot and killed by responding officers. No officers were injured during the incident.

"In less than one minute, Dayton first responders neutralized the shooter," Whaley saidabout the incident. "I really want to -- think about that minute. The shooter was able to kill nine people and injure 26 in less than a minute. And if we did not have police in the Oregon District and the thousands of people in the Oregon District enjoying their Saturday evening, what we could have had in this city.”

Taylor Mayberry, who told NBC News she was inside Ned Peppers at the time of the shooting, told the station she hid in the bar's bathroom as “tons of gunshots” went off.

“I just heard a few gunshots and then saw everyone jumping to the ground,” she told NBC. “I've never experienced anything like that, so I dove to the ground and started running to the bathroom. I saw people trying to move toward the exit.”

>Elizabeth Long, spokesperson at Kettering Health Network (which runs several hospitals in the Dayton area) told CNN that 13 people were taken to three of the network's hospitals. Most had gunshot wounds to the “lower extremities,” with at least one shot in the abdomen and two taken into surgery. No age range was given. No information yet on the identities of the victims.

Dayton Police have said they believe the suspect acted alone. The FBI will be assisting with the investigation.

Here’s a clip of the Dayton Police confirming details as of early this morning:

And a live stream (including words from Mayor Whaley) here: